Twelve children were huddled around a long table. Though they were only 7-13 years old, they would ordinarily be on the street, begging or selling merchandise for their families. They would not be in school if it were not for the School on Wheels (SOW) program of the Little Children of the Philippines. The children live in difficult circumstances and, because school was not a priority set by their families, they are behind in their education. By offering them non-formal education three hours daily for 10 months, SOW allows them to catch up on their lessons so they can re-enter public school. And it provides them with a hot meal.

On this day, they had just finished their lesson when they were treated to something they had not expected. This day, a large box of Lego pieces was delivered by a young boy and his parents visiting from New York. The boy opened the box, spread out the blocks in the middle of the table, demonstrated to the kids how to connect the pieces, and showed them a sample of a finished product. The kids’ faces lit up, and when their teacher gave the green light, they immediately set out to connect pieces to begin building their own creations. The visiting boy helped the kids dig and find pieces for their projects. Many of the boys immediately looked for wheels and wings, creating an assortment of imaginative vehicles. Many of the girls (and a few boys) created spaces — homes, gardens and playgrounds. They were so engrossed in the fun of building that one of the girls said, “Can we stay here all night?” Another boy worriedly asked, “Are you taking this back with you?” He heaved a sigh of relief when told that the box now belongs to the SOW program and that they can use them every time they are at school after their lessons for the day. 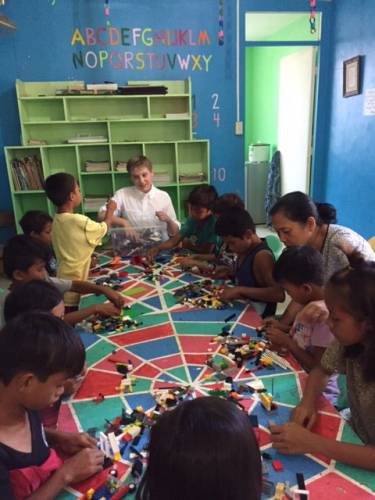 A School on Wheels student shows Boden (center) one of the Lego pieces he picked up.

The Legos were delivered by a child just like them, a twelve-year-old boy named Boden Bubb from the Presbyterian Church of Mt. Kisco (PCMK). Boden set up a drive among his schoolmates and friends at the Rippowam Cisqua School in Bedford, NY. With their help, he collected 100 pounds of Legos to be donated to the various shelters and children’s programs in Dumaguete City. But there was more to his efforts.

We met Boden last September during our visit to the PCMK, and it was then that he heard about God’s work in the Philippines and the various ministries with which Cobbie and I are involved. Boden learned that the Silliman Water Ministry was in need of another solar-powered water filtration system. He made a presentation to the Social Justice Committee of the PCMK, asking them if they would match his fundraising drive if he were able to raise half of the money needed. They enthusiastically agreed. That very night, he rushed home and set up a GoFundMe site. His theme was “Unless Someone Like You Cares A Whole Awful Lot, Nothing is Going to Get Better. It’s Not” (Dr. Seuss, “The Lorax”).

Boden reminds me a lot of the story of the Feeding of the 5,000 from the Gospel of John 6:1-14. When a great crowd of people followed Jesus, the disciples were faced with the challenge of feeding the crowd. Andrew pointed to an unnamed boy and told Jesus, “Here is a boy with five small barley loaves and two small fish, but how far will they go among so many?” Many of us know that Jesus took the loaves and fish, and all were able to partake of as much as they wanted. And there was even more left.

Little was said about the boy who had the loaves and fish. But I imagine that he had intended to bring them home to his family. And yet he was profoundly moved by the presence of Christ to offer what little he had. It was in this act of giving that Christ could perform a bigger miracle, blessing and feeding thousands, and revealing to all present that He is the prophet that is to come. 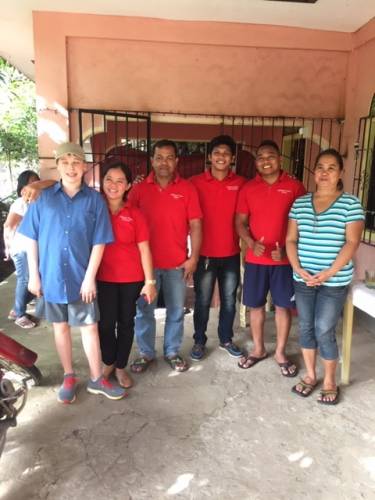 Boden (far left) joins the Silliman Water staff (the four people to the right of Boden) in delivering water to the rural village of Balili.

Boden’s parents, Brian and Vicki, share that their son has a big heart and a desire to help others: “There are many people in our local community who also wonder where the next meal will come from. Boden has worked on a number of food drives and has raised money to support the local food pantry. He works with both his school and the Presbyterian Church of Mount Kisco to help others.”

With Boden’s efforts together with the PCMK, Christ is at work blessing more communities. The Silliman Water Ministry will now be able to build another solar-powered water filtration system that allows disaster-struck communities to gain access to secure and safe drinking water. Four shelters and programs working with children in difficult circumstances will also have big boxes of Legos that will enable the children to play, expand and express their imaginations, explore their design and creative skills, and engage in joyful learning.

Thank you, dear Jesus, for young children, individuals and churches who are touched by your Word and your spirit to help others. It is through them that children in the Philippines and many parts of the world feel Your steadfast love, kindness and faithfulness. We thank all who continue to journey with us in prayer, in action and in material support. We hope that all these shall sustain us in life-giving partnership for God’s mission.