Individuals:  Give online to E200393 for Cobbie and Dessa Palm’s sending and support

Blessed are the peacemakers, for they shall be called children of God   Matthew 5:9

I was invited to be an accompanying presence at the UCCP Haran Mission House Compound on the war-torn southern island of Mindanao.  I understood the volatile situation, but every new conflict situation sends the chill of fear through the nervous system.  I was invited because I am the International Representative to the Philippine Ecumenical Peace Platform (PEPP), the largest church-based peacemaking network in the Philippines with a mandate to promote peace talks and dialogue. 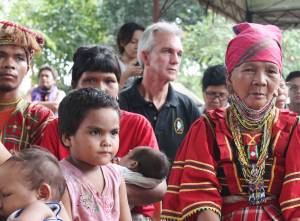 Sitting among the Lumad evacuees and listening to the leaders

Entering the compound, I could sense a heightened level of vigilance as eyes followed my every move toward the Mission House.  I was an unfamiliar presence until several from the UCCP leadership came out to meet me and escort me into the compound.  The briefing I received was a reiteration of the alarming news broadcast by national networks just two days before: a violent confrontation between 682 Lumad (a term referring to indigenous peoples) and a contingent of more than 400 Philippine soldiers and police.  The displaced men, women, and children were of the Talaingod Manobo indigenous people who had sought refuge at the UCCP Mission House since April 7. The soldiers and police had been dispatched in full riot and battle gear to retrieve the refugees by force and return them to their mountainous communities.

The displaced people had journeyed by foot on their own resolve from their mountain communities to seek safe sanctuary at this UCCP compound.  The church has worked with other support networks in a spirit of secular ecumenism to help them settle.  An organization of health workers has provided them with a small clinic, an association of teachers has provided a temporary school, and concerned citizens have provided provisions for food and water as well as bamboo to build makeshift homes. 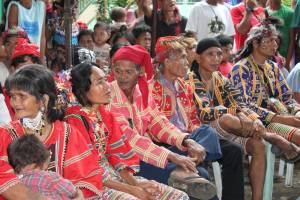 The tragedy of their story is that their ancestral lands are in the Pantaron Mountain Range, where mining rights have been allotted to large investors.  When these indigenous people expressed their opposition to the mining interests of these large investors, the military presence increased.  The military organized and armed a civilian military force from among their people called the ALAMARA.  The presence of the ALAMARA has divided their community into two factions now at war with each other.  The armed ALAMARA have recruited by force—threatening, harassing and even using or destroying the crops and animals of community members who will not show loyalty and support to the soldiers and ALAMARA.  The majority of people in the community have refused to be recruited; in fear for their lives and well-being, they left to seek refuge and sanctuary at the UCCP Haran Mission House Compound.

Ashamed of the disturbing media coverage, the congresswoman who represents the Pantaron Mountain Range has taken action.  In the early morning of July 23, 2015, the Haran UCCP Security Guard noticed a buildup of police vehicles.  Soon military trucks and buses arrived outside the compound gate.  Church leaders and support groups were immediately notified and called to come to the compound and help negotiate a peaceful resolution.  Church representatives approached the unexpected visitors and called for a dialogue.  During the dialogue we suddenly heard a commotion as men from outside tried to open the gate and allow the police, equipped with shields and batons, to force their way into the compound.  The refugees in the compound identified those who forced the gate open as belonging to the ALAMARA. 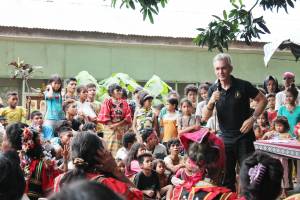 Speaking to the Lumad evacuees and leaders about negotiating peace

The dialogue immediately broke up.  The leaders ran to the gate to prevent forced entry.  After shouting and pushing back and forth, the attempted forced entry failed.  Through the intervention of the vice-mayor of Davao City, the situation was calmed.  The vice-mayor himself asked the displaced people to take one hour and decide whether they wanted to return or stay.  Whatever their decision, he promised, he would escort and assist them.  After an hour not one of the refugees volunteered to return to their community. The military and police left the area, but not without a threat to return with more armed combatants.

This is the church.  Her property houses the evacuees.  Her mandate is to seek peace and pursue it, to protect the weak and prevent bloodshed.   The church’s mission in this war zone is not to retreat, not to lose courage, but to use her influence to reach out to the congresswoman and persons of authority, to appeal to their consciences on peace and humanitarian grounds not to act with force in this situation but instead allow a continuing dialogue to take its course.

As I work with the churches in the Philippines to seek peace for the Lumad, I am sustained by your prayer and empowered by your support. Please continue to pray.  Please continue your financial support. Together with God and the Filipino people we are making a difference in preventing the escalation of violence and ultimately putting an end to this war.