A letter from Dessa Palm serving in the Philippines

“My wife died because of your company’s irresponsible actions!” a bereaved husband screams at the local mining company’s manager.

A recent landslide led to deaths in the community. Both the manager in the implicated mining company and the villager whose wife was killed in the landslide are church members. The pastor is caught in the verbal crossfire between the two members who are arguing heatedly and becoming more incensed by their differences. He tries to pacify them, but implores them to discuss the issues when they are not at church. These kinds of conflicts, he claims, can ruin the church’s unity. 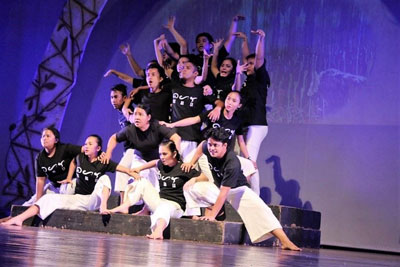 Seminary students of the Silliman University Divinity School creating a tableau on the theme Liturgy and Creation.

This event did not actually happen—rather, it is a scenario that was acted by seminary students of the Silliman University Divinity School, who for several years have inspired the cultural presentations produced annually for the Church Workers Convocation hosted by the university for the United Church of Christ in the Philippines. Last year, the theme was Liturgy and Creation, and with seminary students and faculty, we designed a creative worship service with texts expressed not only through words, but also through drama, songs, dances, images and stories. Instead of a traditional sermon by one pastor, we used a theater technique called Forum Theater (based on the work of Brazilian dramatist Augusto Boal) in which student performers portrayed a dilemma commonly faced by pastors when church members are on different sides of the fence on an issue. The performative worship was called Bathala, an ancient Filipino word used to refer to God the Creator. Moved by the harassment of indigenous peoples by armed groups that seek to protect the interest of mining companies, the Silliman University Divinity School’s theater group, Banikanhong Magdudula, began to explore how the theme Liturgy and Creation can capture urgent church-society issues. Local UCCP churches have indeed attempted to express their solidarity with the persecuted by providing sanctuary to fleeing indigenous peoples. 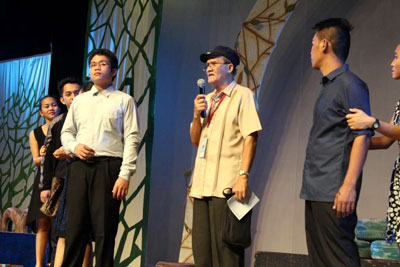 After the above scene was played out, the congregation (now considered as spect-actors) was asked whether the pastor’s actions were acceptable and sufficient for the situation. There were whispers of dissatisfaction that reverberated throughout the auditorium, and then a stronger voice that said, “No.” The congregation was invited to propose alternative actions and to come on stage to try to play out their suggestions. The short scene was repeated, and several church workers came up with different strategies. An elder pastor stood between the two church members, and with an emphatic tone opined, “The problem is not just about this one mining company or the landslide. It is about the bigger issue of how multinational companies are grabbing and extracting from our lands at the expense of our people, especially the poor.” A woman pastor used a clinical pastoral approach, and with a gentle voice asked the manager, “Can you listen to what the other is saying? Are you sensing what he is feeling?” She encouraged each to listen and to understand the feelings of the other. The most applauded response was one in which a local conference minister (the equivalent of a presbyter executive) stood by his belief in the necessity of human stewardship of God’s creation and suggested that the manager’s mining company should own up to its role in the disaster and be held more accountable. The manager became defensive and retorted, “Well, pastor, if that is your position, then I think we will consider just leaving the church and withdrawing our support.” The minister, in a spontaneous act, began to pick up an item on stage that was given by the manager to the church as a gift during the previous short scene.

This collective act of ideating, while meditating on how Christ would respond to similar acts of injustices, became an integral part of the continuing education of church workers during the convocation.

Students of the Silliman University Divinity School were also encouraged to be directly involved in the creative process through a songwriting workshop facilitated by Prof. Jean Cuanan Nalam and artist trainer Earnest Hope Tinambacan of Youth Advocates Through Theater Arts (YATTA). This led to the composition of five new songs for the creative service. One of the seminary students, Dixie Isaac O. Bangcog, remarked that it was God’s Word that inspired him to write the song “Pakinggan” (Listen). His song is roughly translated below.

Do you hear the earth crying
From our abuse and neglect?
Majestic mountains carved by greed.
What if this natural wealth disappears completely?

Do you hear the birds crying
With the falling of trees that cradled their home?
Water and air that were once fresh and clean
Now have been poisoned by human wrongdoing.

Chorus: Come and open your eyes,
Listen to God’s creation lamenting.
Let us get together, and in our minds sow gratitude.
All this bounty we owe to God our Creator.

Do you see the dawning of a new day?
Where life and creation are honored,
Plants, people and animals, living in peace.
Let us start now with God’s love guiding us through.

Working on the annual productions of the seminary has given all of us an opportunity not only to reflect on the convocation theme but also to listen to God’s word and wisdom throughout the artistic process. Many students who have been involved in this work continue to utilize creative methods in their lives as church servant-leaders.

We are thankful for the way that God works through this, and we are thankful for all the support and prayers that allow us to continue this ministry. We hope for your sustained engagement in these efforts, through prayers, financial gifts and loving thoughts.

Proverbs 2:1-5
“My child, if you accept my words and treasure up my commandments within you, making your ear attentive to wisdom and inclining you heart to understanding; if you indeed cry out for insight and raise your voice for understanding; if you seek it like silver, and search for it as for hidden treasures—then you will understand the fear of the Lord and find the knowledge of God.”