A Christmas Letter from Cobbie and Dessa Palm, serving in the Philippines

For everything there is a season, and a time for every matter under heaven. Ecclesiastes 3

The Advent Season brings us the hope of new beginnings as we celebrate the birth of the child Jesus who lived and died offering us, and each person he encountered, a new beginning. As the Apostle Paul wrote, “In Christ, everything old has passed away and the new has come.” We extend our warmest hopes to you that as we all pass through the Season of Advent, we will be filled with the freshness of the new that comes through Christ.

We look back and celebrate the seasons that God has laid before us in 2018. We have been challenged, stretched, pained and uplifted as we have made our way through the year. We firmly believe that God has a purpose, and we remain steadfast in our commitment to do justice, to love kindness and to walk humbly with God in the good times and hard times.

The Peace Talks, to which Cobbie has dedicated much of his time in the last two years, hobbled into 2018 after a hopeful new beginning under President Elect Rodrigo Duterte. The possibility of an agreement between the government and the National Democratic Front Philippines (NDFP), who have waged an armed struggle for almost 50 years, seemed bright. However, hope was dashed in 2018 when President Duterte declared an end to the Peace Talks, turning the guns of the military on the NDFP and declaring them a terrorist organization. This change of heart has been a painful disappointment.

The mood of the country has turned to caution and even fear for the defenders of human rights. Sister Patricia Fox, a church colleague and Australian Roman Catholic nun who arrived in the Philippines 27 years ago, was detained and deported for participating in a mission that revealed the abuses suffered by indigenous people. Human rights lawyer Ben Ramos, who was working on a case defending students who were detained for supporting farmers’ rights, was shot and killed. Both are people with whom our work often intersected — losing them pains us deeply. 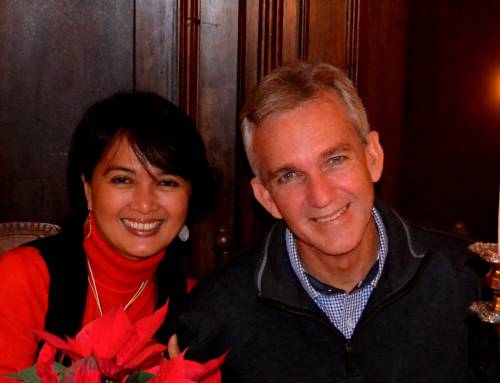 This year was also a year of pain at home, with the passing of Cobbie’s father, the Rev. James E. “Jim” Palm. He set Cobbie on his path of ministry and mission service, as he also served in the Philippines and was later director of the Stony Point Center, an ecumenical training center in New York. He will be missed by many, but especially by Cobbie.

Alongside the moments of pain, we have been blessed with the pieces of our lives that are uplifting. The Silliman Water ministry that provides clean drinking water to communities in need, a ministry that Cobbie continues to develop, has reached an exciting level of accessibility with the creation of the SolarPure. Built on a wagon and powered by the sun, this mobile water purifier can be brought to crisis and disaster sites. This year, SolarPure units have provided clean drinking water to war-torn Dansalan College in Mindanao and to the resettlement site of the massive landslide in Naga, Cebu.

Dessa continues to mentor various groups through the theater ministry. The Silliman University Divinity School produced another original production to commence the seminary’s commemoration of its beginnings as the Silliman Bible School and the lives of its founders and early students. The Youth Advocates Through Theater Arts (YATTA) has toured its advocacy pieces related to child trafficking and bullying in schools, and a more recent work that explores issues around inclusion and accessibility. YATTA also organized the Awards Night for the UCCP’s Unsung Heroes during the 75th Anniversary and General Assembly held at Cagayan de Oro City in Mindanao.

We also coordinated the placements of two dedicated Young Adult Volunteers — Lauren Robinson, who worked with survivors of gender-based violence, and Emma Warman, who worked with children and youth in difficult circumstances.

Finally, this year we had the opportunity to visit Presbyterian churches in the United States to inspire and excite them about Presbyterian international mission. It was a wonderful opportunity to connect with old friends and meet new friends. We were warmly welcomed in homes and learned of the challenges and opportunities facing our Presbyterian congregations. All along the way, we were reminded of what it means to love your neighbor as yourself, and we were inspired by the dedication, creativity and commitment of the churches who hosted us. Our prayer was that we would generate hope and excitement in the churches we met, but we discovered that we were leaving each of our wonderful hosts hopeful and so excited ourselves.

Together let us all keep the faith and hope alive. May this Christmas season be a beautiful new beginning.
Dessa and Cobbie