Once upon a time in a pandemic 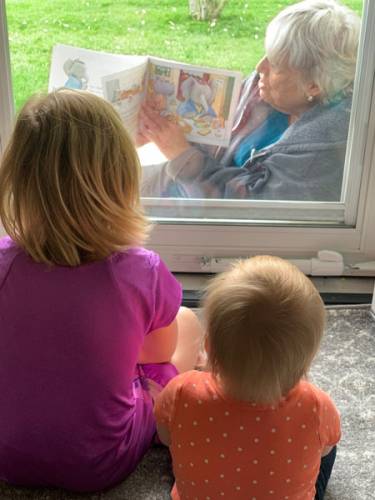 Storytime at a safe social distance — Paula Howlett, of Westminster Presbyterian Church in DeKalb, Illinois, reads author Jill Murphy’s book, “Five Minutes’ Peace,” to her granddaughters, Maisie, who will be 5 in June, and Freya, 1. The children are fifth-generation Presbyterians. (Photo by Kat Schnorr)

While staying connected to family, friends and church, Paula Howlett, a member of Westminster Presbyterian Church in DeKalb, Illinois, has followed all the rules for social distancing during the COVID-19 pandemic.

As a retired early childhood special education teacher, Howlett understands how easily things like viruses can spread. So, she’s been cautious, talking to her granddaughters by phone, video chat, driveway visits or inside-outside front-door story time, which the kids loved. “They could see the pictures much better through the glass than on screen,” Howlett said.

Maisie, who turned 5 in June and began kindergarten in the fall, has continued her weekly dance classes virtually, and Freya celebrated her first birthday with a safe, socially distanced parade.

Maisie is “quite verbal,” Howlett said. “Sometimes she tells me, ‘I want to read you a story.’ Then she tells a story from a book we’ve read before.”

Although Howlett would love to give her granddaughters a big hug, the closest she’s been to them in months is this inside-outside storybook time that began as a spur-of-the-moment idea. Typically, she’d been reading by video chat with the girls each evening before bedtime. They never seem to tire of hearing Grandma Howlett, whom they lovingly call “Guy Guy,” read the same stories again and again.

“I have tons of books,” Howlett said. “They seem to like just about anything.” Favorites include any of the adventures of “Franklin the Turtle,” “Five Minutes’ Peace,” a story about a mother elephant and her three energetic elephant children, and “Bad Hair Day,” a tale about a little girl who wears a hat because she isn’t quite sure about the at-home haircut her mother gave her. “I try and sneak in other books,” but they ask for these often, Howlett said.

Before the pandemic, Howlett saw the girls nearly every day, since they live just across town, maybe three miles away. Their paternal grandmother, “Nana Wendy,” lives just south of DeKalb, and also sees the girls often. Sometimes Nana and Maisie go for socially distanced bike rides, or Nana may jog behind Maisie as she rides her bike.

Howlett’s daughter, Kat Schnorr, mother of Maisie and Freya, grew up attending Westminster Presbyterian Church and has followed her mom’s career path in teaching. Schnorr worked for several years as a nursery attendant before accepting the position of Sunday school coordinator and teacher at the church.

Westminster Presbyterian Preschool, now in a different location and known as The Growing Place, was Howlett’s first job after college graduation. She is currently president of the board and her youngest granddaughter, Freya, is in the day care program.

Howlett has a couple of dogs, close friends and has enjoyed virtual church during this time of isolation. She knew the technology was in place but had never need to try it before. She’s noticed that former members who have moved away are also tuning in to worship virtually.

“Easter Sunday was wonderful. I really felt in community, seeing who’s there as their names come up. Westminster also has a ‘virtual coffee hour’ Zoom meeting, so people can catch up with one another and pass along prayer concerns. It’s not the same, of course, but certainly better than not having anything.” She says it is an exciting time to be part of Westminister Presbyterian. The church hopes to call a youth pastor soon. For now, there are only a few preschool-age children in the church, maybe six or seven, but a ministry for children in a nearby apartment building and a mid-week dinner program are promising post-pandemic outreach ministries.

Lord, help us to be instruments of your grace: constant in our love, unrelenting in pursuing peace and faithful in working for all Amen.