CEPAD empowers farmers to help themselves and generations to come 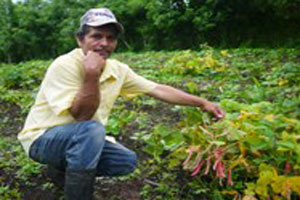 After working with the Council of Protestant Churches of Nicaragua (CEPAD) to irrigate and fertilize his crops, Eduardo grew enough beans to feed his family. (Photo by Audrey White)

One of our planet’s worst earthquakes leveled Managua, Nicaragua, in December 1972. A medical doctor and missionary, Gustavo Parajón, raced to action. Within hours he had mobilized others to feed those left homeless. This ecumenical, Jesus-loving, outward-looking group called itself the Council of Protestant Churches of Nicaragua (CEPAD). Today and for most of its more than 40-year history, CEPAD has helped people feed themselves and avoid the need to emigrate.

Nicaraguans depend on the land. They call themselves “Pinoleros,” people of the corn, because corn is the base of many of their drinks and dishes. Hazel Mariel y López, a leader in her community of Jiquelite, says, however, that while she and her neighbors are rich in natural resources, they are poor in self-esteem.

The problem, she says, is that some of her neighbors have counterproductive habits. For instance, while a variety of crops can be grown in Nicaragua, people typically raise only corn and beans. Even if some grow orange trees, they may sell the oranges to buy Tang, the artificial orange drink. Healthy produce is sometimes sold, out of necessity, to purchase staple items of less nutritional value.

At CEPAD, where my wife, Renée, and I work, we believe that successful farming must overcome both internal (theological or psychological) challenges, as well as external challenges like occasional drought and destructive torrential downpours that regularly devastate growing seasons. CEPAD approaches its ministry from this holistic grounding.

CEPAD is a rock star to many of the 6 million people in Nicaragua, but not in the way of flash and fame. Christian churches in Nicaragua work year-round to advance agriculture and train leaders to transform their communities. 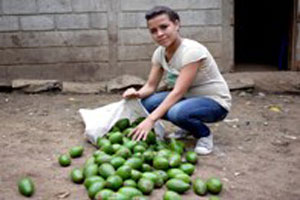 Oneida helps on her family’s farm in Nicaragua and takes special pride in the avocado crop. (Photo by Audrey White)

CEPAD’s answer to the problem that Hazel identified involves considerable training and education—new water and soil conservation techniques, crop rotation and, when possible, drought-tolerant crop varieties. Organic fertilizers and pesticides, all made from locally accessible materials, are introduced, embraced and put into practice.

But the answer also involves building self-esteem. Hazel reports that CEPAD is doing this, even “electrifying” her community of Jiquelite. How? By giving people a chance to learn and experiment. Further, she says, CEPAD’s agricultural training, emphasizing care for the environment, is inspiring. Hazel says that she and other village leaders are increasingly remembering their own heritage of creation stewardship. They are strengthening their “own wisdom and knowledge.”

She is quick to credit God, stating that “with the Lord’s help . . . our new knowledge is deepened.” She adds, “You should see the reforestation we are doing! [We can] look at everything ahead . . . and we see that our sowing with CEPAD today will reap good.” 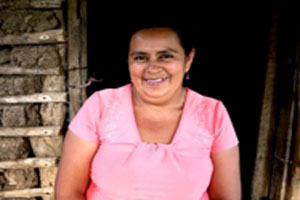 Juana Figueroa receives training from CEPAD and now experiments with a variety of produce. She hopes to be able to afford to send her son off for more schooling. (Photo by Audrey White)

Juana Figueroa, from the Nicaraguan community of Santa Josefina, exemplifies creativity and hard work. She wants to send her son for more schooling but does not have the money. Her walls are adobe and she dreams of something more sturdy and safe. She grows corn and beans. But she has begun to receive training from CEPAD and now experiments with a rich variety of produce, including squash, cucumbers, melons, lettuce, cabbage, tomatoes, peppers, radishes, onions, beets, jocote fruit, mangoes, avocados and quequisque, a starchy purple root vegetable.

Juana says that CEPAD has been sorely needed in Santa Josefina “to help ourselves . . . move forward, and especially to help our children.”

Central America’s most well-known farmer/trainer, the late José Elías Sánchez, often said there is no bad farming land and no dead spaces. He believed that death and what is bad are in us, in our minds. First, he said, we must change the “human farm.” The future can be changed when we change as people.

CEPAD always has had the conviction that people are made in God’s image, that people are capable—so capable they can convert bad, even dead, land into fertile places that provide food for all. 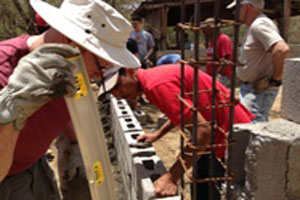 Though a Nicaraguan organization, CEPAD’s impact extends to the U.S., Canada and Europe. God cultivates the minds and hearts of those who join in its work. It has been a strong partner of the PC(USA) in mission since the 1980s. Today it regularly welcomes teams from Presbyterian churches across the United States. They come to learn and serve. And they say that it is Jesus’ example that leads them here.

When people from the north serve in short-term mission through CEPAD, they marvel at how much they learn. They leave with a sense that God is reshaping them. And the change can be quite strong.

A woman named Kennedy sat with me and her church group from West Virginia to reflect on how God was speaking to them. They were circled up at the end of their third day in Nicaragua after spending a brief time in the home of Nicaraguans. She was struck that her hosts’ lack of material possessions did not make them sad, disheartened or angry. Kennedy shared how her attitude toward consumption will be different: “When I get back to the U.S., I have a big online order, sitting in my cart ready for checkout, and I know that none of that stuff will make me happy.” Kennedy has discovered the life-changing truth that though we need some  material things in our lives, they don’t fill us up or bring us joy, nor do they move us outward in love and service to others.

Every five years CEPAD accepts the requests of 42 new communities and starts over in its training and people and community capacity building. Just as God has sown in Kennedy’s heart, so God sows, it seems, in all who serve through CEPAD.

Gracious God, we plant and water the seeds, but you alone give the growth to our mission and outreach projects. Keep us faithful in our work in your vineyard. May our labors bear fruit as we help others discover and develop their God given gifts. Through Jesus Christ our Lord we pray. Amen.