Reconciliation among Cubans and Cuban Americans

This article originally appeared in the September/October 2016 issue of Presbyterians Today.

Hope for reconciliation between the United States and Cuba reached a peak when Barack Obama became the first sitting president in 88 years to visit the island nation. People lined the streets of Havana, chanting for the American president—an act that could have sent them to jail in another era.

Barbara D’Andrea, chair of the Cuba work group of Presbytery of Long Island, has been going to Cuba every year since 1994 and happened to be there for the historic event.

“When we first started going to Cuba, governments on both sides were telling us how wrong we were to do so and how dangerous the other side was,” D’Andrea says. “That was a barrier that we had to overcome in our church-to-church relationship. We had to learn to trust each other.” 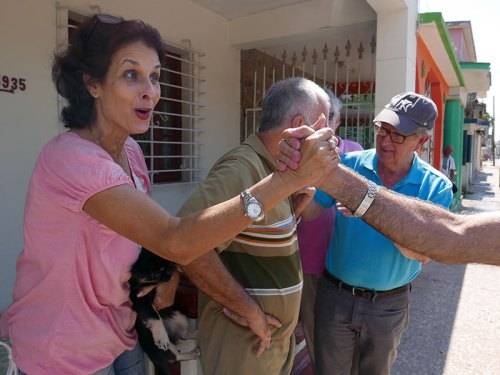 Laura Vega of the Güines Presbyterian Church greets a group of Americans as they walk by. (Photo courtesy of Barbara D’Andrea)

Francisco Llano, a 96-year-old Cuban lawyer and a member of the Güines Reformed-Presbyterian Church of Cuba, told D’Andrea he never thought he would see the day when the two nations could move beyond the Cold War.

The friction between the two countries was reflected in the relationships between Cubans who stayed in Cuba and those who immigrated to the United States for political and economic reasons. Friends and family divided over whether it was better to stay or to leave.

It was a difficult decision to make, but after the revolution many Presbyterian ministers and members of the Presbyterian-Reformed Church in Cuba left the country, many for the United States. This left a feeling of mistrust that has lasted for many years.

Attempts at mending relationships have involved intentionally developing ties between churches. Since its formation in 2000, the Cuba Partners Network has helped congregations in the United States and Cuba do mission work together across broken country ties.

D’Andrea says the relationships between members of the Long Island presbytery and Güines church grew despite the political division between the countries. 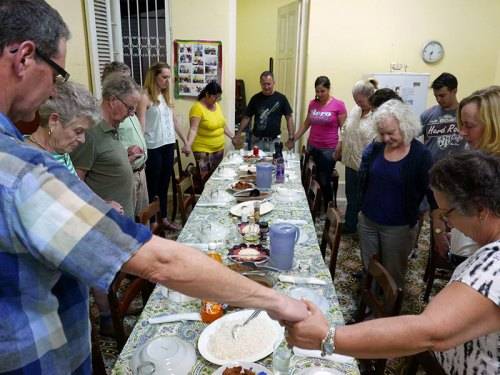 Mission partners from the Presbytery of Long Island and Güines Church in Cuba offer a blessing before they share a meal at the manse of the Cuban church. (Photo courtesy of Barbara D’Andrea)

While the relationship between the Long Island Presbytery and Güines church has gone well, the relationships between Cuban families and friends who have divided can still be a challenge. The road to reconciliation between Cubans who stayed and those who left is long and still includes some rough stretches. There are no easy answers.

“This is probably the Cuban church’s greatest desire and perhaps the most complicated to achieve,” says Patrice Hartley, executive presbyter of Tampa Bay Presbytery. “Resentment remains toward those who left—some say abandoned—Cuba. People who have settled in the U.S. are sometimes suspicious of the Cubans who remain in Cuba, as if they are pawns of the communist government.”

‘The only thing that makes sense’

Jose Luis Casal, executive presbyter of Tres Rios Presbytery in West Texas, is a man with a foot in both worlds. He was born in Cuba and served as a pastor there until 1988. That experience gives him a unique perspective, and he has earned the respect of Cubans, Cuban Americans, and other Americans.

He did not leave Cuba for the United States, but was authorized by the government to minister in Ecuador. He came to the U.S. years later to work at building a relationship between presbyteries in Chicago and Havana. He agrees that there are still some old feelings about those who left Cuba to move to the U.S. and “abandoned” the church. Casal says he believes this feeling is much less prevalent among the younger generation.

“More important than anything else, we have to forget the past and move forward. We have to let go of old feelings,” he says. “The only thing that makes sense is to work together toward the future.”

And he is doing just that.

He said the healing must be accomplished Cuban-to-Cuban. So he, with other Cubans from the U.S. and the island, is putting together a delegation of Presbyterians from different parts of the United States to meet with a delegation of Cuban pastors in order to foster a dialogue of understanding and reconciliation. 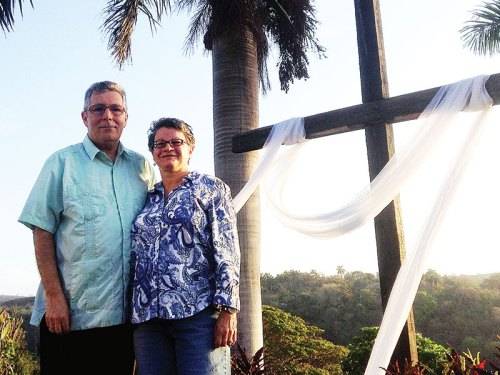 In addition to Casal’s work on reconciliation, David Cortes-Fuentes and Josey Saez-Acevedo are seeking to be part of the healing process. Last fall, they became the first Presbyterian mission co-workers sent to live and work in Cuba since the 1959 revolution. Cortes-Fuentes is teaching New Testament and Greek at the Evangelical Theological Seminary in Matanzas, and Saez-Acevedo assists several congregations with their educational ministries with children and youth.

Cortes-Fuentes says the division between those who left and those who have stayed has created both a challenge and an opportunity for the church. Because many of those who left Cuba were younger, service ministry to older adults is now a vital part of the Cuban church.

At the seminary level, service ministries, or diaconal ministries, are integrated into all aspects of ministry training and even everyday life. It’s a relational form of ministry that is considered vital. The emphasis on relationships is now transcending political borders.

Cubans have heard reconciliation talked about from the pulpit and in private conversations. Pastors have talked about the division and the need for healing. They have articulated the pain that many Cubans experienced when some family members chose to stay while others decided to go.

“I’ve heard pastors say we have to be ready to welcome our brothers and sisters when they come back now that travel is easier,” Cortes-Fuentes says. “The message is that we have to have our hearts in the right place if people want to come back.”

“People have come to me and told me they are trying to reach out to their family in the States,” adds Saez-Acevedo. “They want to experience reconciliation before it’s too late, before they die or lose their loved ones.”

The reconciliation process is only beginning, but the political changes are opening doors for other changes.

“When I talk to the pastors and the leaders of the church, they are open to healing on both ends,” Saez-Acevedo says. “They know it will take time, but they are hopeful.”

‘So much we can learn’

Patricia Metcalf is a ruling elder of First Presbyterian Church of Champaign, Ill., and a longtime member of the Cuba Partners Network. She has been visiting Cuba since the 1970s and has hosted numerous Cuban visitors in her church.

Those relationships have dramatically changed the way network partners look at mission. In the past, some would go in with preconceived notions of how to do things and what to teach the others. In reality, it’s a two-way learning process. Cuban sisters and brothers make decisions about determining priorities and sharing resources.

One of the most important details that network partners have learned is that church is not just on Sunday in Cuba. Church life there is daily; churches are filled with people every day. Their community life is rich. Seeing the way they share resources, both natural and human, allows partners in the United States to reexamine the decisions they make.

Church-to-church contacts continue to help mend relationships. Recently a delegation from the presbyteries of Peace River, Tampa Bay, and Tropical Florida made a historic trip to Cuba to meet with leaders of the Presbyterian-Reformed Church in Cuba. The trip was historic because those PC(USA) presbyteries received the majority of the Cubans who fled the island after the revolution. None of those presbyteries had been involved in the long relationship between the PC(USA) and the Presbyterian-Reformed Church during the years of estrangement between the governments.

Valdir Franca, who heads PC(USA) World Mission’s area office for Latin America and the Caribbean, believes that working together is key to moving forward.

“I am hopeful the Protestant church in Cuba will continue to strengthen its relationship among the several small denominations on the island, through the Cuban Council of Churches,” he says. “It is important for them to agree on common concerns and develop strategies and cooperation in areas that are important for the Protestant church. The Roman Catholic Church is the only religious organization that is legally recognized as a church in Cuba, so a unified voice in the dialogue with government and society will definitely help them face the challenges ahead.”

Heavenly father, your unconditional love inspires us to be loving, welcoming and hospitable to our neighbors. Pour into our hearts your compassion; strengthen and guide us as we go forth to make your kingdom tangible. Grant us your peace and surround us with your presence. Amen.