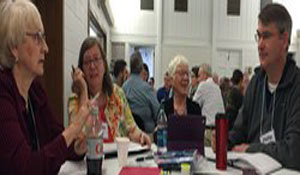 Leaders from about two dozen presbyteries across the country gathered in Des Moines, Iowa, August 26–27, for the trial run of a new kind of training event. Called “Practical Presbytery Leadership Training: Teamwork for Changing Times,” the conference was designed to equip teams of people to meet the diverse leadership needs of their presbyteries, especially those in the midst of change.

“I was hoping for maybe 25 people, and we ended up with 100,” says Sue Krummel, director for mid council relations for the Presbyterian Church (U.S.A.)’s Office of the General Assembly, which sponsored the event along with the Presbyterian Mission Agency. She says the conference drew participants from as far away as Texas and California.

Marsha Heimann, stated clerk of Lehigh Presbytery in Allentown, Pa., traveled to Des Moines with two colleagues who serve on committees in her presbytery. She says the two-day event was packed with valuable information and opportunities to network with leaders in other presbyteries.

“We were very tired when we got home, but we were so energized,” she says.

The energy has begun to spread. When Heimann and her colleagues reported what they had learned to the leadership council of Lehigh Presbytery, their twenty-minute presentation turned into an hour-long conversation. “People were so enthused,” she says. “I haven’t seen that kind of excitement in over a year.”

Presbyteries were encouraged to send teams of people to the training event, and most of them did, Krummel says. Some sent executive presbyters or stated clerks, but most were moderators of presbyteries or of presbytery leadership teams.

“That was really our hope. These are the kind of people who never get invited to events for church leaders,” Krummel says. Yet they are the ones who most need to be included at a time when the denomination’s mid councils are experiencing radical changes. Many presbyteries are experimenting with shared leadership or replacing full-time, salaried staff with teams of part-timers or volunteers.

Heimann, a retired school nurse, describes the eighteen months since she became part-time stated clerk of Lehigh Presbytery as a time of “tough transition.” The loss of Lehigh’s executive presbyter prompted a year-long period of discernment, during which the presbytery decided not to hire another executive but to divide up the work among volunteer leadership and current staff, namely Heimann and a full-time office manager.

Those making decisions about the presbytery’s future “needed help, direction, something to help us focus,” Heimann says. Attending the event and talking with others going through similar transitions has given them hope.

“We walked away knowing that we’re not going to close the doors. We’re going to find a new vision.”

Conference topics  included change, conflict, polity and building trust in leadership. The one that resonated most with participants was “how to build a vision for the future in our presbytery,” Krummel says.

Among other things, Heimann says she and her colleagues learned the importance of taking the time to find the right person for each leadership role. “In order to change our vision,” she says, “we need to start with the nominating committee.”

Meeting at Central Presbyterian Church in Des Moines enabled conference participants to worship four times in a beautiful space, Krummel says. At the final service, participants were commissioned to return to leadership in their presbyteries.

The overwhelmingly positive response to this event suggests “a real need” for training designed specifically for groups of presbytery leaders, Krummel says. She expects plans will be under way for two to three regional events a year, beginning in 2017.