A source of affirmation, friendship and mutual support for more than 40 years 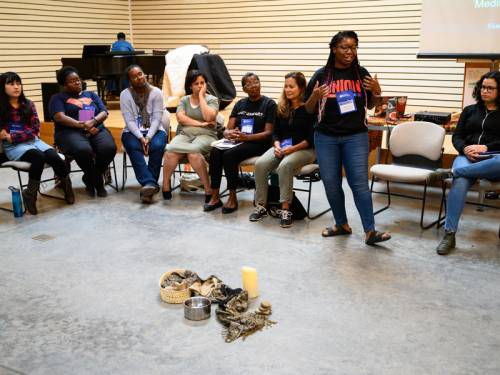 The Conference for Seminarians of Color was first held in 1979. Since then, students of color
have found a much-needed space to support one another, learn and share. Participants say
the friendships made at the conference have been invaluable. Courtesy of the Presbyterian Mission Agency

Presbyterian survey of seminary life revealed a pressing need among students of color, which at the time represented a small percentage of seminarians attending various theological institutions nationwide. The study found that, in some cases, there were very few seminarians of color per campus, and most frequently, they were not members of the same racial or ethnic group.

The realization arose that Presbyterian seminarians of color needed to feel less isolated. But how could that be remedied?

The answer was the Conference for Seminarians of Color, in which the Rev. James “Jim” Reese and the Improving Minority Prospects (IMP) Committee were the driving forces behind its creation.

The IMP Committee of the Church Vocation Agency, in the Office of the General Assembly, was chaired by Dr. Frank Wilson. He and committee members Jim Costen and Charles Marks, and other influential voices, realized there was a great disconnect for seminarians of color and particularly Black seminarians.

These astute Black ministers realized there was a need to provide ongoing support for minority seminarians, and particularly Black seminarians, since that was the largest minority group of the church at the time.

Marks says the formation of the IMP Committee was a pioneering initiative. “It was a very inclusive group,” he said. “There were African Americans, Native Americans, Asian Americans and others on the committee. This perhaps was the first intercultural committee of the Presbyterian Church.”

Reese explained it this way: “It appeared to me that the number of persons of color in seminary was so small that they didn’t have any way of feeling they were important, as well as comfortable about what they were doing, where they were doing it and how they were doing it. So, I came up with the idea that we should bring all of the seminarians of color together once a year in a single place to strengthen their relationships, help them feel significant and important, and address whatever questions or needs they brought to the meeting.”

In 1979, every person of color attending a Presbyterian seminary was invited to the inaugural Conference for Seminarians of Color, which was held in Atlanta at Johnson C. Smith Theological Seminary. At the time, the Presbyterian Church was a denomination divided into northern and southern divisions. Reunification didn’t occur until 1983 with the formation of the Presbyterian Church (U.S.A.).

Reese recollects that there were only 55 students of color enrolled in Presbyterian seminaries that year.

However, he said over the next eight years the number of nonwhite students enrolled in Presbyterian seminaries doubled.

Since the conference’s inception, more than 1,000 seminarians of color have attended. Many of these individuals are currently serving or have served in national leadership roles within the denomination.

They include: the Rev. Dr. J. Herbert Nelson, stated clerk of the Office of the General Assembly; the Rev. Dr. Diane Moffett, president, and executive director of the Presbyterian Mission Agency; and Rhashell Hunter, director of Racial Equity & Women’s Intercultural Ministries, which she says “seeks to offer seminarians of color, new immigrants and women an overview of the many skills and talents needed to succeed in leadership.”

According to Jewel McRae, associate for Women’s Leadership Development and Young Women’s Ministries, and an alumna of the conference, attendees “come together to join in community with other church leaders in a spiritual and nurturing environment.”

The seminarians explore paths to ordination, engage in vocational discernment, learn how to take senior ordination exams and navigate the call process.