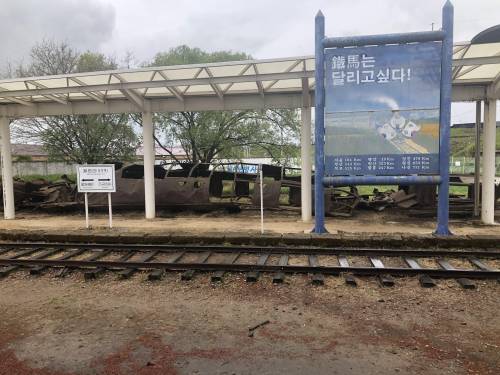 The railroad ends at this station in the DMZ. The sign says, “the train wants to run.”
There is the remnants of a train, which was bombed during the Korean War.

Beautiful wildflowers are blooming all over the place with warning signs of land mines. It speaks the reality of the DMZ (Demilitarized Zone) and the Korean Peninsula. Since my wife, Jieun, and I came to Seoul, Korea, as Regional Liaisons for East Asia in 2020, we have visited the DMZ area twice: inside the Civilian Control Line and inside the DMZ.

There is a strict military control in the area. We had to leave our ID cards at the checkpoint, and wherever we go, we are watched by surveillance cameras. The scars of the Korean War are still visible, like the warning signs of land mines.

Yet, limited number of civilians live in peaceful villages and cultivate land inside the Civilian Control Line. There is the Border Peace School inside the DMZ, teaching peace and reconciliation.

Only 2 kilometers from the Border Peace School is North Korea. But as civilians from South Korea, that is as far as we can go. After the Armistice Agreement in July 1953, with the promise to sign the Peace Treaty within three months, it has not been signed for 68 years. Meanwhile, countless families have been separated, and the peninsula, which once was the land of morning calm, has become one of the most heavily militarized lands. The surrounding nations — China, Russia, Japan and the U.S. — want the peninsula to be remained as divided and in tension as their buffer zone. As always, people are suffering amid the power game.

It’s time for us to pray, and we need an action to end the war and establish the peace treaty.

Today’s Focus:  Season of Prayer and Reflection in the Korean Peninsula

Let us pray with singing: