Running toward strangers to extend the hospitality God requires of us 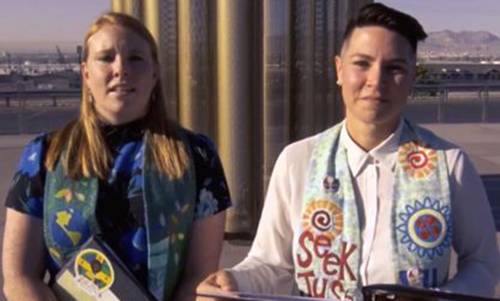 “Gospel Hospitality and the Kingdom of God,” the conference held online by Presbyterian Border Region Outreach, recently concluded with a worship service.

The Revs. Holly Clark-Porter and Kaci Clark-Porter, a clergy couple serving Grace Presbyterian Church in El Paso, Texas, led a worship service from a powerful and moving spot: the Grand Candela monument erected in fall 2020 to memorialize the 23 people killed on Aug. 3, 2019, allegedly by a Texas man who authorities say posted a document online before the shootings railing against immigrants.

For her preaching text, Holly Clark-Porter chose Genesis 18:1–15, the account of Abraham running out to welcome three strangers, offering them a feast and hearing from them the promise of a young son even in his and Sarah’s old age. “Why did Sarah laugh?” God asks Abraham near the end of the passage. “Is anything too wonderful for the Lord?”

“We can’t call ourselves people of the covenant unless we live into that covenant,” Clark- Porter said. “Whoever you are, whatever you have laughed at, whatever your legs look like beneath your robe — put your running shoes on! We’ve got some entertaining to do.”