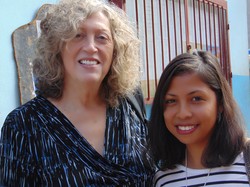 Presbyterian mission co-worker Jan Heckler approaches education in Madagascar with a deep passion in her heart and a learned wisdom.

“I was called by the Lord in 1999 to go to Africa,” Heckler says. She followed that call to a country where 92 percent of the people live on less than $2 per day. While change won’t come quickly, Heckler and the Presbyterian Church (U.S.A.)’s Malagasy partners believe expanding and improving education will result in higher incomes and a better quality of life.

“The stranglehold this level of poverty has on Madagascar will not be changed overnight by simply better educating its populace,” Heckler acknowledges. “But the World Bank, the IMF (International Monetary Fund), UNESCO (United Nations Educational, Scientific and Cultural Organization) and nearly all others who address the question agree that it is the number one thing to do to help a nation develop and to develop more quickly.”

Heckler’s commitment reflects her four decades of experience as a researcher, consultant and teacher. Heckler works with schools affiliated with the Church of Jesus Christ in Madagascar, better known by the Malagasy acronym FJKM. The initial results of the instructional methods she is introducing alongside her Malagasy colleagues are remarkable.

In a pilot project, scores on cumulative final exams improved from the term-ending average of 60 percent to 90 percent correct. This substantial improvement occurred after only one term of teaching with the new methods. The methods are part of the Evidence -Based Methods of Instruction (EBMI) that the FJKM wants to introduce in its 723 primary and secondary schools. Heckler says EBMI has an excellent record in a wide variety of classroom settings.

In 2007 Heckler visited Malawi, where she had helped implement EBMI three years earlier. “The EBMI learners who had gone on to secondary school by then had, as a group, come to everyone’s attention for being at the top of their classes—even though EBMI was not being used in their secondary schools,” she says. She attributes the success in large part to students “learning to learn” and to their increased self-confidence and better attitudes toward learning.

In Madagascar, the struggle is not only to improve classroom instruction, but also to encourage children to stay in school. Madagascar’s educational level is just 5.2 years, and the primary school dropout rate is 65 percent.

It’s a challenging situation, but Heckler’s strong sense of a call helps her persist in her work. She was helping teach adult Sunday school at North Decatur Presbyterian Church in metro Atlanta when she first felt God nudging her toward international service. “It became clear to me that God’s expectation of loving our neighbors is not limited by proximity,” she says.

God of heaven and earth, we remember before you the work of those whose earthly mission is accomplished. Send us into the world, as you sent them, to extend the loving rule of the one you sent, Jesus Christ our Lord! Amen.