Praying for the women of Hagar’s Community Church 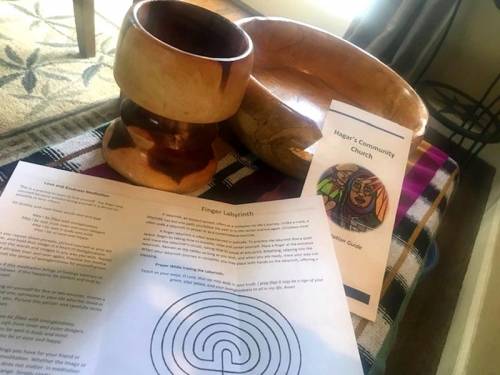 The communion set used by the women of Hagar’s Community Church when they are able to celebrate communion together at weekly services. It was made by an inmate from Angola Louisiana State Penitentiary. The women wrote him a letter thanking him for his contribution to their worshiping community. (Photo by Lane Brubaker)

Hagar’s Community Church, a 1001 New Worshiping Community in Olympia Presbytery located inside the Washington Corrections Center for Women (WCCW), is currently unable to meet for worship due to social distancing required inside the prison during the COVID-19 health crisis.

“This work I have been called to do has fundamentally changed me as a person,” Brubaker wrote in a Mission Crossroads article last summer. “Being allowed to witness the lives of the women at the WCCW and worship alongside them weekly has opened my eyes to the realities of incarceration in the United States. It also has shown me how transformative God’s love can be.”

Brubaker wrote that the worship services she has had the honor of leading are “full of laughter, gratitude and love.” The few from the outside who have had the privilege of being able to visit during worship say they are caught off guard by this. Expecting worship to be much more somber, they comment on the power of the women’s faith and how it speaks to and teaches them.

While this woman was sharing, Brubaker said she realized how important it is that these women have a place where they are not known for their worst mistakes, but rather as God’s beloved.

“During this time, I am asking God to use me however possible, and I am feeling called to prayer. I know prayer is powerful and needed.”

Brubaker invites people of prayer everywhere to be part of a great cloud of witnesses lifting up the women of Hagar’s Community Church in prayer each Saturday from 5–6 p.m. Pacific Time. Prayer sessions will continue as long as this health crisis lasts.

Almighty God, give us grace that your knowledge may become ours. May we grow in faith, and bear fruit worthy of your people, living and growing in the Holy Spirit, both now and forevermore. Amen!