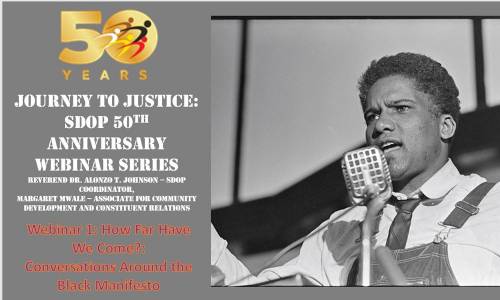 James Forman, author of The Black Manifesto, argued more than 50 years ago that white churches and synagogues should pay $500 million in reparations for injustices against black people. (Photo courtesy of Presbyterian Historical Society)

When African American activist James Forman presented The Black Manifesto in 1969, calling for $500 million in reparations for injustices against black people, he made it clear that he thought Christian churches were partly to blame for the oppression of his people.

The Manifesto, which was the subject of a recent webinar by the Presbyterian Committee on the Self-Development of People (SDOP), demanded $500 million from white churches and synagogues and outlined how the money should be used, from creating a Southern Land Bank and a Black University to establishing a National Black Labor Strike and Defense Fund.

“We call upon all black people throughout the United States to consider themselves as members of the National Black Economic Development Conference and to act in unity to help force the racist white Christian churches and Jewish synagogues to implement these demands,” according to the Manifesto.

The webinar focused on the Manifesto because the document is credited with being a catalyst for the creation of SDOP. The anti-poverty ministry is celebrating its 50th anniversary this year in multiple ways, including hosting the Journey to Justice SDOP 50th Anniversary Webinar Series.

The Manifesto also has implications for understanding the impact of slavery and other “cataclysmic” practices, such as land grabbing, Johnson said.

“One of the legacies of the Black Manifesto and the concerns expressed is that there would be an acknowledgement and understanding” of slavery “and what it meant and what it means,” he said.

In May 1969, Forman brashly took over the podium at Riverside Church in New York City to present the Manifesto. He also presented the document at the General Assembly of what was then known as the United Presbyterian Church.

In addition to requesting reparations, Forman’s Manifesto highlighted the interconnectedness of the problems of racism and economic, political and cultural degradation of black people. It also called for the liberation of black people, both in the United States and abroad, and supported using force.

“We live inside the United States, which is the most barbaric country in the world, and we have a chance to help bring this government down,” Forman stated in the Manifesto. “Caution is fine, but no oppressed people ever gained their liberation until they were ready to fight, to use whatever means necessary, including the use of force and power of the gun, to bring down the colonizer.”

The Manifesto was offensive to many white liberals back in 1969, said the Rev. Dr. J. Oscar McCloud, a veteran of the Presbyterian Church (USA) who shared his thoughts during the webinar.

Plus, “they were frightened by the language,” McCloud said. With recent events involving the Black Panthers in Oakland and New York, whites “saw an expression of what they thought the Black Manifesto was calling for.”

Although Forman was largely unsuccessful at securing reparations, the Manifesto sparked substantive discussions about economic equity and its intersections with race and class in the United States, according to webinar materials.

One of the ways the Presbyterian Church responded was by creating SDOP, said McCloud, associate pastor emeritus at Fifth Avenue Presbyterian Church in New York City. The program, which thrives today, issues grants and enters into partnerships with people who want to change their lives and communities.

“The Presbyterian Church, in its own way, was the most responsive of any of the denominations to The Black Manifesto” in that it started programs like SDOP and the Presbyterian Economic Development Corporation (PEDCO), McCloud said.

In you, Living God, the young are given wisdom. In you, the old are given enthusiasm. Forgive us our foolishness and laziness. Unite us in harmony and community with each other and with you, our Triune God. Blessed be the Father, and Jesus Christ the Son, and the Holy Spirit. Amen.