Reality tempers idealism after most recent visit to Cuba 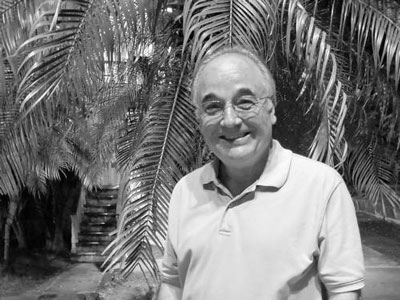 Tony Aja at the Evangelical Theological Seminary in Matanzas during his most recent visit to Cuba. (Photo by Kathy Melvin)

The Rev. Tony Aja returned to Cuba last October for only the second time since he fled the country with his father in 1967.

Strolling through his old neighborhood, he remembers all too well how his family and friends suffered during the Cuban revolution, but as a minister of the gospel he clings to the hope that forgiveness and reconciliation, even at the political level, will come eventually.

In the last 18 months, he has witnessed significant strides in the normalization of relations between the U.S. and Cuba and wonders what may change following both the death of Fidel Castro and new leadership in Washington.

“I am very concerned about the future of Cuba-U.S. relations under the new administration,” he said. “I worry that there will be an effort to undermine what President Obama has done. Certainly, with the new Congress, the elimination of the embargo will not take place anytime in the near future, as many of us had hoped. I know that our relationship with the Cuban Presbyterian Reformed Church will remain strong. But the current processes of mutual mission and the exchange of ideas and people may have to be revisited and become more creative, depending on how the new administration acts.”

He stressed the importance of the growth of U.S. advocacy and hopes voices within the church ring loud with the call for social justice and reconciliation.

When he was just 14 years old, Aja’s father made the decision to leave Cuba. He found it untenable to live under a government that declared itself communist and atheist. He knew he had to get his son out of the country before he turned 15, when Tony would no longer be allowed to leave and would be forced to register for mandatory military service.

His mother stayed behind to care for an ailing parent. Tony and his father spent a year as refugees in Spain, his grandfather’s birthplace.  In Madrid, they lived in a hostel with nine families, sharing one kitchen and one bathroom. It was a stark contrast from his middle-class upbringing in Havana in so many ways. He would not reunite with the rest of his family until 14 years later.

After a year, Tony and his father moved to Miami to be near an uncle and two cousins. He enrolled in Miami Senior High School, nicknamed “Havana High.” Raised Catholic, he stopped going to church and called himself an agnostic. Then he began dating another Cuban immigrant, Loyda Puig, a Baptist, and found his faith again. They married and began raising their family before he discerned the call to deepen his faith at the Southern Baptist Theological Seminary in Louisville. He became a “home” missionary for the Baptist denomination, working with refugees and migrants on social justice issues.

“I have always considered myself progressive, and at that time the Southern Baptist Seminary was very progressive,” he said. When that began to change, he left the Baptists and went to work for an ecumenical community ministry in Louisville as its executive director.

Once again, his wife Loyda, helped him hear God’s call. She had started working for the PC(USA) in Louisville. She told him, “Tony, you need to come down here. They talk like you.” At Crescent Hill Presbyterian Church in Louisville, he found mentors and friends, and in 1997 he transferred his ordination to the Presbytery of Louisville.

Loyda served as associate stated clerk in the Office of the General Assembly for almost 15 years. Aja pastored Presbyterian churches in Louisville and served both at the General Assembly Council and what is now the Presbytery of Mid- Kentucky. In 2013, he earned a doctorate of ministry degree from McCormick Theological Seminary. Since January 2015 he has served as the pastor of Westminster Presbyterian Church in Santa Fe.

Aja returned to Cuba in October for meetings and discussions with the Presbyterian Reformed Church of Cuba as part of the Cuba Partners Network. The group discussed recommendations from the Advisory Committee on Social Witness Policy that met in June at General Assembly. After a brief stop in Havana, the group traveled to the Evangelical Theological Seminary in Matanzas.

Returning home to Cuba was very emotional for Aja. “It was almost surreal,” he said. “On one hand, everything was different, and in some ways it seemed so familiar. Reality has tempered my idealism, though. When we went to the market, it was shocking to see their desperation to sell things.”

Cuba has seen a relaxation of policies in recent years, and a few small business permits have been awarded, giving some people a chance at a higher standard of living.

“This type of micro-capitalism, however, has given rise to an economic disparity not seen in over 50 years,” he said. “This income disparity is made significantly greater by the 20 percent of Cubans who receive foreign remittances from friends and family living abroad.”

Although Aja’s three children were born in the U.S., they consider themselves Cuban American. Their Cuban ancestry is a source of pride that remains an important part of their daily lives.

His oldest son is a professor of Latin-American policy at Brooklyn College. His daughter is a graduate of McCormick Seminary, and his younger son is professor of German and coordinator of Jewish Studies at San Francisco State University.

Aja hopes to return to Cuba again soon. He said the Cuban people continue to hope and pray for the opening up of individual liberties and freedom of expression. They have not lost heart.

“Please pray for Cuban Christians,” he said. “Pray for Cuban pastors and leaders. Pray for the churches that minister holistically to the needs of their communities. Pray for the full restoration of relations between the United States and Cuba and the end of the embargo.”

Dear God, we thank you for new life, new hope, and the redemption of your creation. Amen.