Pastor Scott Weimer asks ‘What Gifts Do You Have?’ for Missional Living

Situated on the north end of downtown Atlanta, North Avenue Presbyterian Church began its life over 100 years ago as a suburban church. But the city grew, the neighborhood changed and the people who originally lived around North Avenue migrated farther out.

As other churches around it relocated to newer suburban communities in the ’60s and ’70s, North Avenue decided to stay in the area, even though much of the neighborhood had become blighted. The problems associated with poverty, drug use and prostitution had by then spilled onto the streets and into the doors of the church. 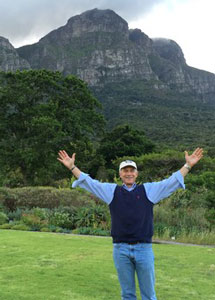 The Rev. Scott Weimer, senior pastor at North Avenue Presbyterian Church, says the decision to stay was a bold move, sending a signal to neighborhood residents that the congregation was going to stand with them.

The church continues to grow and extend its mission. Under the banner of “radical hospitality,” it has become home to many immigrants and refugees, including many non-Christian visitors. Weimer notes that scores of Chinese students studying at local universities have started attending, which has resulted in over 90 baptisms.

Weimer sees as a model for how congregations and individuals are to engage in ministry and mission through Mark 6:30-44, feeding of the 5,000.

“Jesus has compassion for the needs of people around him, for the masses,” he said. “The disciples notice that the people are hungry and they tell Jesus about it, saying, ‘Fix it!’ But Jesus says to them, ‘You feed them.’ And Jesus asks them, “What gifts do you have?’ And they bring the five loaves and two fishes to Jesus, and he does something extraordinary with them.”

Though the context for engaging the passage is North Avenue’s work on human trafficking and poverty in Atlanta, Weimer believes it applies to any ministry to which people are called.

“Atlanta had become a major hub in the human trafficking of children,” he said. “When, as a pastor, I heard those stories and read those statistics about Atlanta, it was like the disciples seeing the people are hungry and [wanting] Jesus to do something. We said, ‘We see kids being trafficked, but who’s going to do something?’”.

The church rallied around the cause, and Weimer saw his congregation doing as Jesus asked the disciples, ‘bringing their gifts and joining them together to address the problem.

Weimer spoke to Presbyterian News Service from Chicago, where he was attending a Presbyterian Foundation board meeting.

How did North Avenue Presbyterian Church become such a focal point for advocacy around human trafficking?

There were three corners of Atlanta that were named as particularly problematic [for human trafficking], and one of those corners was our corner—North Avenue and Peachtree Street.

It blew our minds.

I felt it was important to speak about it from the pulpit but didn’t know how the congregation would respond. We don’t talk about sexuality very well in our churches anyway, in my opinion. We tried to find language to talk about living in a culture that’s filled with sexual saturation.

I thought that if someone would respond negatively, it was maybe going to be some of the older women. But they came right up to me after church and said: ‘We have empty bedrooms in our homes. Our children are gone; we have space to house these [trafficked] children. If they can be rescued, just tell us and we’ll open our houses.

We have a lot of college students, young adults, and they came up after the service and said, ‘If you want us to form teams and go out in the middle of the night and rescue these kids, we’ll do it.’

I didn’t know what to do. It was like asking, ‘How are the disciples going to feed 5,000 people?’ And as I wrestled with that, I felt the Spirit saying: ‘Just bring your gifts, Scott. Bring the gifts of North Avenue Church.’

How have you partnered with other faith communities and civic organizations in this advocacy effort?

It’s become a way to engage other churches in the area, and the mayor has been a strong supporter.

We started a nonprofit agency called Street Grace—taking the grace of God into the streets of Atlanta. ‘Grace’ has also stood for Galvanizing Resources Against Child Exploitation.

It continues to flourish and has gone to changing attitudes around the city in terms of being able to talk about these issues and address them in substantive ways. It’s gone to the passing of legislation at the state level and local level, particularly at the state level, so that Georgia is now becoming a model for the country to look at ways of looking at trafficking and especially the trafficking of children.

What’s your response to people who say, ‘Our job is to spread the gospel, not to be involved in politics,’ when it comes to advocacy efforts like this?

What we say is that we believe caring for the poor, caring about justice for those who don’t have it, speaking into the presence of evil in the world, and doing that in the name of Jesus is the unique calling of the church.

We do it from the perspective of following the call of Jesus to heal the brokenhearted and bring release to the captives and to feed the hungry, and all those admonitions come from Jesus himself.

In the Old Testament the verse that kind of drive us is Micah 6:8 — ‘What does the Lord require of you but to do justice, love kindness and walk humbly with God.’

When it comes to working with state and local government, it comes to this: Why wouldn’t we work with those who are working for the same end? It’s part of being the salt of the earth and the light of the world. It’s bringing us faith into our community and working with people of good will who want to bring about what we believe are God’s purposes in the world.

We do it in the name of Jesus. They may do it for some other reason, but we’re working for the same common good.

What does ‘living missionally’ mean to you?

For me it comes down to a simple motto: internally strong and outwardly focused.

It’s first to be internally strong in the things of God: to grow deep in my relationship with God, abide in Jesus, allow him to abide in me—and the fruit that comes from that is what God desires to do within and through me.

Yet it’s always to do this with an outward focus. Jesus was always looking outward and calling us to be salt and light.

If we just focus outward, we don’t have the internal strength, and we burn out. If we go deep spiritually, but we’re not looking out, then we’re not much good to anybody.

It also goes back to that important point in our church—the priesthood of all believers. Each one of us is uniquely gifted and called and given a sphere of influence that is an opportunity to live out a mission wherever God has called us to be.

Faithful God, we are blessed by the ways in which our sisters and brothers focus not on what they do not have but on what they do have, and offer it to be a blessing to God and to others. May it be so with us. Amen.