Reframing stewardship as a spiritual discipline of generosity 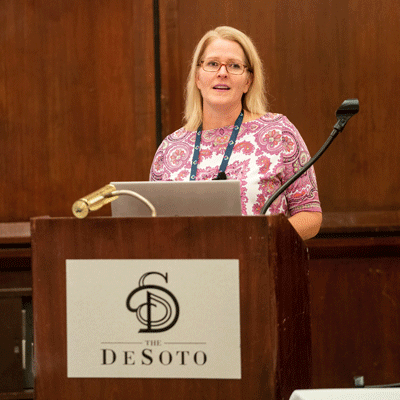 The Rev. Dr. April Davis Campbell really wanted to cultivate a space for her church where people wouldn’t just associate the fall season with being asked for money.

Applying this to generosity during this year’s Stewardship Kaleidoscope conference, Campbell said the question she has learned to ask is not how to get people to give more, but to identify how generosity can encourage people to deepen their relationships with God and each other. Learning from failure — such as when adding an option to give to the morning offering by text message didn’t actually increase giving — and learning from success has helped Campbell understand the importance of seeing generosity as a lifelong spiritual discipline.

“This workshop will encourage participants to reframe their understanding of generosity to a spiritual discipline which empowers generosity not just as financial giving but as a way of life,” she said. “Drawing on personal and pastoral experience, the workshop will offer ideas for creating a culture of generosity which moves people in terms of their relationship to God and to giving.”

Campbell shared how Trinity Presbyterian made the journey toward reframing stewardship into a spiritual discipline of generosity. She said using specific and intentional steps — discernment, study of Scripture, prayer, personal testimony and repetition — helped their faith community. By discerning what shaped their theology of giving, Trinity was able to define where they are before attempting to jump into where they were going.

Where they were going led to 13 weeks of Scripture study and prayer using passages such as Genesis 45:1–5, Exodus 16:11–16, Psalm 25:1–5, Matthew 6:24–34 and Ephesians 3:20, among others. What these Scriptures have in common is the theme of God providing and personal giving as an act of being in relationship with God and community. By sharing the same Scriptures in social media, newsletters, announcements, in worship and other forms of communication, Trinity was able to include as many folks as possible in the process.

Rooted in Scripture and prayer, church members then engaged in monthly story sharing: personal three-minute video testimonies defining generosity, exploring how each person learned to be generous, and offering examples of personal generosity. The intentions for the congregation were clear, too, as the church offered 24 video stories for sharing in worship.

“We were not putting this out there as a way to get more money,” Campbell said. “We really wanted to deepen people’s relationship with God.”

Even Campbell shared a personal video, saying she wasn’t willing to ask people to do something unless she was willing to do it, too.

Communication, she added, was paramount, including over-communicating. Everything Campbell and the leaders of Trinity did came from a place of intentionality. An intentional change, for example, was a shift of language: saying “generosity” instead of “stewardship.” Campbell said it took two years for the congregation to fully embrace the idea of a generosity and finance committee vs. a stewardship committee. For them, it wasn’t just semantics; it was a necessary part of reframing the paradigm.

Campbell conceded change — any kind of change, including a change to how a congregation thinks about generosity — is tough. It is a challenge to change a way of thinking, which is why Campbell said her church spent a whole year of intentionally focusing on the spiritual disciplines of generosity. Giving the congregation and congregational leaders time allowed them to absorb the mindset shift and live into the new mindset, including a brand-new format for the annual report that was shorter and included more pictures of the church of Jesus in action.

For Campbell, discernment around generosity is a lifelong journey. She said it’s an ongoing journey asking, “How are we the living hands and feet of Christ in the world?”

The Rev. Rebecca (Becki) Mallozzi serves as pastor at Faith Church in Emmaus, Pennsylvania. She is a graduate of Waynesburg College (Pennsylvania) with a bachelor’s degree in English and communication and worked as a newspaper reporter before starting seminary. She earned a Master of Divinity from Princeton Theological Seminary.

Grant us, O God, in the midst of all occasions in life to find the healing, the strength and the joyful anticipation of your presence. Amen.