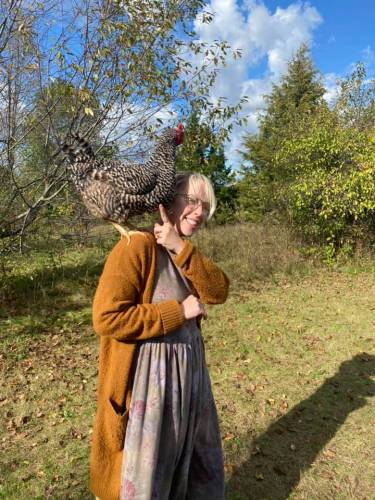 The Rev. Laura Sias-Lee’s daughter, Abigail, discovered the wayward hen in the churchyard one morning. Since that day, Henrietta, has become the church’s best calling card in community. (Courtesy of Sashabaw Presbyterian Church)

The Rev. Laura Sias-Lee has always been open to the Spirit leading her to do things differently, like successfully introducing an unorthodox way for her Sashabaw Presbyterian Church congregation to gather for worship.

Rather than meet every Sunday morning, the faithful in Clarkston, Michigan, now worship on the second and fourth Saturday nights of the month, leaving the first and third Sunday mornings for traditional praise and prayer. Sias-Lee says it gives her small congregation two Sundays off to “slow down and renew their spirits.”

Then there was the time the Spirit led the pastor to create what she called the “Jesus Wall.” After noticing a picture of a Eurocentric Jesus hanging in one of the first churches that she served, Sias-Lee began searching for and hanging depictions of Jesus that represented different cultures, races and even moods, like that of a Jesus seemingly caught in the middle of a good joke.

The Jesus Wall became an effective way to open hearts to the Gospel truth that the Son of God came for all humankind.

“I didn’t want to take away who people identified with. Rather, I wanted to expand their idea of who Jesus is,” said Sias-Lee, adding that the wall was especially helpful in new member classes where she would number the pictures and ask people to reflect on which Jesus they identified with the most.

“The answers were very interesting,” she said.

Yes, Sias-Lee is open to just about everything and anything the Spirit leads her to. But a year ago, when a feathered friend came strutting out of the scrubby woods that are part of the church yard, the pastor did not expect the little critter to be the answer to Sashabaw Presbyterian’s “How do we connect more with the community?” question. Yet, “Henry,” who would later be called “Henrietta” — the eggs the hen laid led to the name change — has become the best public relations for the church.

“The hen has become our calling card,” said Sias-Lee.

Up until Henrietta, the congregation was ardently looking outward doing what it called “little things in love” in the community. Little things included inspirational, cheery chalk drawings left on the sidewalk during the height of the pandemic’s sheltering in place to brighten the path of the those walking by.

Another little thing, said the pastor, was having flute music playing at night to greet the many more walkers who were seeking some connection outside of their Covid-cloistered four walls. The “little things” were effective, but then came Henrietta.

The hen arrived on the first day of the church’s new preschool, Acorn KinderHouse. It was an exciting time as operating a preschool had been a desire of Sias-Lee’s and, with the session’s support, it was now a reality. As the teachers were getting ready to welcome the children, Sias-Lee’s daughter, Abigail, who works alongside her mother at the Waldorf-inspired school, came running into the building announcing that there was a chicken outside.

“Sure enough, when we went outside there it was, just walking around and exploring,” said Sias-Lee.

It remained for the day and returned the next day, and the day after, and the day after that. Concerned with the chicken’s safety — “We wondered where it slept at night,” Sias-Lee said — and after calls to animal rescue agencies turned up no owner claiming a missing pet chicken, the preschool parents acted. One parent offered to buy a coop; another picked up chicken food. It was obvious what was happening.

Henrietta was clucking her way into the hearts of Acorn KinderHouse’s children.

Henrietta has also provided an opportunity to talk to the children about where food comes from, how important it is to care for animals and, most dear to the pastor’s heart, the chicken has opened conversations with the children about the Divine.

Sias-Lee recalls how one such conversation began when a little girl asked her if God created Henrietta. “It was a powerful moment,” she said.

Loving God, thank you that through you we are able to bear fruit. Help us serve others with the love and understanding of Jesus. Help us grow in your knowledge so we can bear fruit worthy of you. Amen.