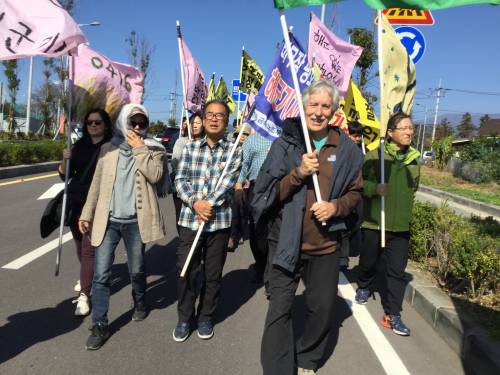 Protest! Why would a 74-year-old retired PC(USA) pastor join in a protest in South Korea? The answer will come later. First, I must tell you I was part of a study group organized by the Presbyterian Peacemaking Program and World Mission in November 2018.  What an eye-opening experience. Along with my wife and nine others, we spent 12 days traveling from Seoul to the southernmost part of the Korean Peninsula and then north to the “demilitarized zone” (DMZ) where the 39th parallel divides North and South Korea.  We learned about the so-called “forgotten war” in Korea. We were appalled to hear about the atrocities committed by all sides. We learned about the continuing tensions on the peninsula because the war ended with a truce and not a treaty.  We heard about the hope of a peace treaty being signed this year, the 70th anniversary of the start of the “conflict.” Such a treaty could reduce tensions, making the outbreak of war much less likely.

Back to the demonstration. A few years ago, in spite of a vote by residents denying approval, the U.S. assisted in the building of a navy base on Jeju Island, known today as an island of peace. Protests continue to this day, peacefully marching, singing, dancing and carrying banners in front of the base each week. Visitors are welcome to join in, and we did. It had not been since a 1971 protest against the Vietnam War that I had done such a thing. It seemed virtuous, but of what value? I wondered. Yet a voice for peace matters, everywhere!

That brief visit to South Korea has widened my world and encouraged me to take stands with family, friends and Congress for peace on the Korean Peninsula and other places where justice and civil liberties are lacking.

Since retiring 11 years ago (after 38 years as a parish pastor), the Rev. Jim McCormack volunteered for three years with Presbyterian Disaster Relief. He and his wife, Jule, have made many trips to the Dominican Republic for Living Waters for the World. They have two daughters and three grandchildren.

Thank you, Lord, for the PC(USA) and its study seminars to various countries around the world. Especially today, we pray for peace between the Koreas, and for the wisdom and courage among all Presbyterians to help bring peace. In the name of the Prince of Peace, Jesus. Amen.