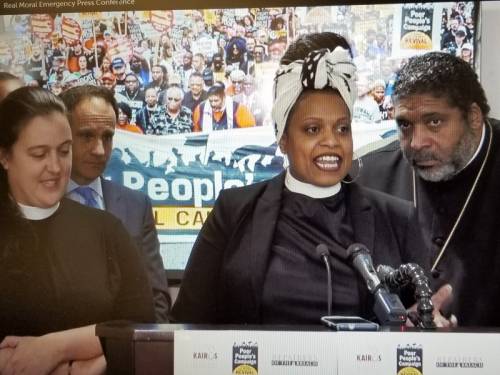 The Rev. Denise Anderson of the PC(USA) Office of Racial and Intercultural Justice speaks at a Poor People’s Campaign press conference in 2019, flanked by campaign co-chairs the Rev. Dr. Liz Theoharis and the Rev. Dr. William Barber II. (Screen capture)

LEXINGTON, Kentucky — The Poor People’s Campaign: A National Call for Moral Revival attracted more than 2.3 million people to watch its three-hour-plus Assembly and Moral March on Washington June 20 online and on cable TV.

It was an impressive audience for an event that was originally planned for several tens of thousands of people at an in-person march in Washington, D.C. – plans that had to change due to the COVID-19 pandemic. But for the campaign, the assembly was just a beginning.

The many films and testimonials from impacted people during the presentation were designed to introduce a detailed public policy proposal: the Poor People’s Moral Justice Jubilee Policy Platform. The campaign wants to mobilize people to advocate for the platform with their legislators, and they have support from leaders of the Presbyterian Church (U.S.A.)’s Compassion, Peace & Justice (CPJ) ministries, based in the Presbyterian Mission Agency.

“What they are asking for is well within the scope of longstanding Presbyterian policy,” said the Rev. Rebecca Barnes, coordinator of the Presbyterian Hunger Program.

The Hunger Program is one of three CPJ ministries supported by the One Great Hour of Sharing (OGHS) Special Offering. The leaders of those programs — also Presbyterian Disaster Assistance and the Presbyterian Committee on the Self-Development of People — said that the Poor People’s Campaign lines up very well with the offering, which supports individuals and communities in need, as well as the goals of the Mission Agency’s Matthew 25 invitation, which include fighting structural racism and systemic poverty.

“Right along with our Matthew 25 invitation, if people are still looking for some concrete steps to do that work in their own communities, these are universally applicable, wherever you are in the country,” said the Rev. Denise Anderson, director of CPJ’s Office of Racial & Intercultural Justice, who has also worked directly with the national campaign and its Maryland chapter. “If you want to go beyond the Bible studies and book studies, here you go.”

In fact, the Poor People’s Campaign (PPC) agenda and social witness policy of the Presbyterian Church (U.S.A.) were closely enough aligned that the assembly was made part of agenda of the PC(USA)’s 224 General Assembly, June 19-27.

Under each point are several tiers of specific policy proposals such as steps to end voter suppression, recognize the rights of Indigenous Americans, protecting immigrant communities, and public education. And that’s just under section one. Additional points include changing poverty measures to reflect current circumstances, universal income, universal healthcare, a jobs program including green jobs, and debt forgiveness.

And it comes at a time when Presbyterians across the country are asking what they can do.

“It’s a pandemic season we’re in, both with COVID and the pandemic of racism,” said the Rev. Dr. Laurie Kraus, director of Presbyterian Disaster Assistance. “Catastrophic seasons uncover the fractures in society that are hidden to many of us during so-called ‘normal’ times.  These challenges offer us an opportunity to look below the surface, and work toward systemic repair, and that’s what all the work that we try to support and the advocacy we engage is all about.”

The assembly was planned for June 20, well before the COVID-19 pandemic and an uprising against systemic racism and police brutality turned the United States upside down. And while it upset plans for the event, as well as PC(USA)’s General Assembly, the CPJ directors say in some ways the event ended up taking place at a time when people were primed to be receptive to the message of the campaign.

“The timing of the Poor People’s Campaign is when a lot of people are closer to the bone financially than they normally are,” Kraus said. “They’re not poor, but they can see how easy it would be to get poor.”

The Rev. Dr. Alonzo Johnson, coordinator of the Presbyterian Committee on the Self-Development of People, talked about the scriptural idea that “God’s action comes at the right time,” noting the assembly fell the day after Juneteenth and as people were fully involved in protesting the deaths of George Floyd in Minneapolis and Breonna Taylor in Louisville, who were both Black, at the hands of police officers, as well as the killings of numerous other people who were Black in police and related incidents.

“George Floyd has become this international symbol of oppression,” Johnson said. “There’s a George Floyd equivalent in Palestine. There’s a George Floyd equivalent in Brazil, and just the symbol of this eight-minute and 46-second death, and the casual way the officer had his hands in his pockets. This is everyday destruction … And it’s very biblical. I think of Psalms, in a sense of evil becoming so incredibly mundane and normal you can put your hands in your pockets when you’re killing someone.

The June 20 event highlighted each aspect of the platform with stories from people directly affected by the issues they addressed, and the same was true of the actual platform.

“The platform was formulated by people who were impacted,” Anderson said. “So, they’re telling you what they need to see and what they are prepared to do.”

The Rev. Carl Horton, coordinator of the Presbyterian Peacemaking Program, likened the policy platform to the “asks” at Ecumenical Advocacy Days each spring in Washington, which end with a day on Capitol Hall during which participants meet with their legislators to bring specific issues to their attention.

“It was really what I needed,” Horton said of the event and the platform. “It was uplifting. It was challenging. It was eye-opening. And it was inspiring. I felt encouraged in our work. I felt here we have a reliable partner that we will be able to partner with in this work.”

Over the years, Kraus pointed out, OGHS ministries have seen the integration of their work and the  advocacy by fellow CPJ ministries such as Mission Responsibility Through Investment, the Presbyterian Ministry at the United Nations, and the Office of Public Witness in Washington. 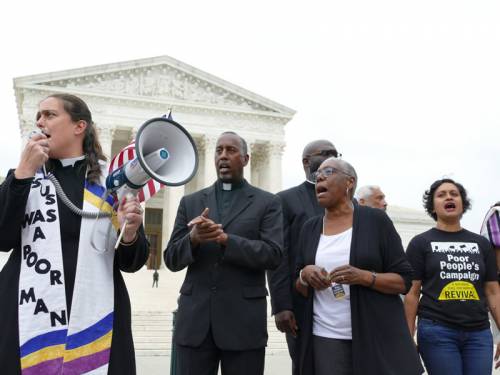 And the converging crises exemplify the importance of advocacy, Kraus and others say, in the work of all ministries. The Rev. Jimmie Hawkins, director of the Office of Public Witness and a member of the Poor People’s Campaign’s Faith Leaders Committee, said that the best way for people to engage with the campaign is through state chapters, as the Poor People’s Campaign is in more than 40 states.

Hawkins knows that advocacy is still an area some church leaders and members struggle with.

“There’s a new spirit focused on justice, and as a whole nation, it’s been led by young people,” Hawkins said. “But we still have holdouts who say, ‘Well, you know, that’s a little too radical for me,’ … or you have clergy who are concerned with one or two members of their congregation, which prevents them from having a prophetic voice.

“You meet your people where they are, but you don’t leave them where they are. You continue to challenge them, you continue to say, ‘This is what the heart of the gospel is all about. It’s about love and justice.’ We’ve got to be more deliberate with our local congregations saying, ‘This is what it means to be the church. You care about your relationship with God, you care about others as well.’”