A letter from Mark Adams serving in Mexico

Have you ever prayed to be spit on?

Last month we received a letter from Chuck, one of the delegation members from First Presbyterian Church of Farmington, New Mexico, who visited us in February.  In addition to sending some incredible pictures from his time with us, he commented on the final biblical reflections that we shared together at the U.S./Mexico border before they returned home, reflections based on Mark 8:22-26 about some people leading a blind man from Bethsaida to Jesus and begging Jesus to touch him.

Before he touched the blind man, Jesus spit on his eyes . . . and after Jesus’ touch the man could only see people who looked like trees walking around.  It would take more than one touch for the blind man to see clearly.

Toward the end of his letter Chuck wrote: “My prayer now is that Jesus will spit directly in my eyes so that I can see clearly any issue that arises.” 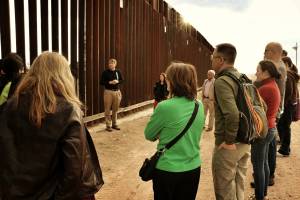 Biblical Reflections at the wall dividing the US from Mexico

This week while in the line of cars that forms in Agua Prieta waiting to ask permission of our U.S. Customs and Border Protection to enter the United States, I was watching for David, one of Dad’s former Carolina neighbors.  Dad is visiting us and was with me in the car.  Dad had never met David although he had passed by his home on Highway 321 between Gastonia and Clover hundreds, if not thousands, of times during the six years David lived in the Carolinas, working in construction.

David, although he has never met my dad, always asks how he is doing when we see each other in the “line”—just south of the 20-foot steel wall that divides our countries from one another.

The queue of cars carrying people toward the U.S. port of entry was long.  In the distance I could see a man pushing a Popsicle cart under an umbrella on this particularly warm and sunny early spring day—it was David.

Rolling down the window, I said: “David, this is my dad.”

“Good to meet you, neighbor,” David said in broken but very understandable English, stretching out a welcoming hand to my dad.

“David is my oldest son’s name.” Dad made a personal observation to the once nameless (to him) neighbor.

During their conversation they discovered that they had shopped in many of the same stores and eaten in several of the same restaurants.

“Do you know the redneck bar going into Clover?” David asked.

“Yes, the one on the right-hand side going into town with the flags,” Dad responded and then quickly added, “but I’ve never been in there.”

“I had a white girlfriend whose father worked there and took me there several times.”

“How did that go for you?” Dad asked in a concerned voice.

“He told them all I was with him and to leave me alone,” David replied.

Before crossing, Dad said, “Come visit us the next time you are in Gastonia.”

“Thank you, but I don’t think I am going back,” David said.

“I’m not welcome there.” 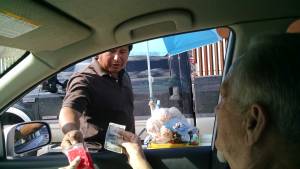 Dad buying a “paleta” in the crossing line from David

And we crossed the border—it seemed as if Jesus had spit on our eyes.

It was a two-hour drive to Tucson after we waited 45 minutes to go less than a quarter mile to cross the border. I was on the way to a meeting with Paul Beeson, the new Commander of the Customs and Border Protection Joint Task Force.

During the drive I was conscious that I was passing through a desert where many folks, some of them named David, had died while following Lady Liberty’s torch to what they hoped would be a better life in the United States.  In the first three months of the year Frontera de Cristo, with whom we serve, has been blessed to facilitate the visits of 19 delegations from churches, universities and seminaries from Presbyterian, Catholic, Mennonite, Lutheran, Christian Reformed and Reformed backgrounds as well as two secular universities.  Over 220 individuals have journeyed outside their towns or cities to cross national, cultural, religious, and political borders and share a bit of life and ministry with us.

With each delegation we had facilitated a border infrastructure tour along a six-mile section of the U.S./Mexico border—a small portion of the area that Commander Beeson is responsible for directing. Commander Beeson had inherited a strategy that was developed in the 1990s that intentionally funneled the flow of migration into more rural areas with the thought that the mountains and deserts would be lethal deterrents to migration.

I realize that while the main goals of the more than $18 billion dollars per year we spend on border protection is to stop people of criminal intent, by far the folks who bear the brunt of border enforcement are folks like Dad’s neighbor David, folks who have welcomed me to their country even while we as a nation hang a big “No Room in the Inn” sign around the neck of the Statue of Liberty.

Sometimes I pray that Jesus won’t spit on my eyes anymore . . . because what I see is too painful.

Asa, a 12-year-old participant in the Farmington delegation, shared in this way: “Crossing the border has been a way in which Jesus has touched and spit on our eyes . . . seeing and talking with our sisters and brothers who are migrating face-to-face, seeing more clearly that they are human beings like you and me.  Jesus does not want us to go back home and be the same as we were.”

Each year through our mission delegation ministry over 500 individuals from around 40 churches, seminaries, universities and leadership organizations join us for immersion experiences that provide opportunities to be touched by Jesus, to see more clearly, and to hear Jesus’ call to not go back to be the same again.

We are grateful to God for the gift of serving as mission co-workers—in many ways World Mission has led us out of our comfort place and we have been touched by Jesus like Asa and the hundreds of other folks we meet each year as part of mission delegations.  We are grateful for your continued prayers, encouragement and financial support that has helped lead us to Jesus to have our eyes opened.  Please pray with us that Jesus will continue to touch our eyes again and again—as many times as needed—so that we can see everything clearly.

Stations of the Cross gallery and the Delegation from the Christian Reformed Church gallery.