A letter from Mark Adams and Miriam Maldonado Escobar, serving on the Mexican border

I see Raul and Donald each day that I walk across the US/Mexico border. Raul and Donald were both born in the first part of the 20th century, and to me both represent essential parts of who the United States is as a nation.

Raul was born in Cananea, Sonora, Mexico, a mining community about an hour southwest of Douglas/Agua Prieta. He migrated with his parents to Douglas around the age of 10 and later became a US citizen. Through extremely hard work and surmounting many obstacles placed in front of him because of his economic and racial background, Raul graduated from Douglas High School and Arizona Teachers College (now Northern Arizona University). After graduation, Raul wanted to return home to Douglas and become a teacher, but could not get a job at Douglas High School—many say it was because he was “Mexican.”

Donald was born a US citizen in Queens, New York. His grandfather had migrated from Bavaria as teenager, and his mother migrated from Scotland at the age of 18 and worked as a domestic servant for four years. By the time he was born, his family had developed a very profitable business. Donald earned his bachelor’s degree from an Ivy League School and later took over the family business.

Raul eventually became a lawyer and then later a judge. He also became an ambassador on three separate occasions, working to build better relationships between the United States and El Salvador, Bolivia and Argentina. In 1975, he became the first Mexican-American governor of Arizona. On June 12, 2012, on his 96th birthday, he was detained at an immigration checkpoint.

Donald was elected the 45th President of the United States. During the campaign, he warned of “rapists and murderers” flooding over the border, and he committed to building a big and beautiful wall that Mexico would pay for and to developing a special “deportation force”— despite the fact that we are at historic lows of people crossing the US/Mexico border and that we have already invested billions of dollars in 20-foot steel barriers on our southern border.

Images of President Trump and Ambassador Castro greet every pedestrian that walks from Agua Prieta to Douglas through the Raul Hector Castro Port of Entry.

I have conversations with Raul and Donald almost every time I see them. While I have never had the opportunity to speak in person to either of them, I ask them a question that we ask of each of the close to 500 persons who visit us as part of our delegation ministry each year: “What do borders mean to you?”

I imagine that for Raul, in addition to a place of being detained and rejected, the border is a place of opportunity and of cultural and economic interchange. As person who grew up in a border community and then became governor of Arizona, Raul understood the border as a vital place of connection to be celebrated. While the border is a place where nightmares can occur, it is more powerfully a place where dreams can come true.

Donald, who has never been detained or rejected because of his race or national origin, has a different understanding of the border. He seems to understand the border as a place to fear, to secure and to defend—a place to militarize instead of re-vitalize. For Donald, it seems that the border is a nightmare that has to be controlled so that the dreams that those who have “made it” in the US are not crushed.

So what does the border mean to Miriam, Cindy, Anna Flor, Nathan and me?

With all of its joys and suffering, its opportunities and challenges, the border is our home and it is home to over 12 million people along the US/Mexico border. I think that those who have made the laws and policies regarding border security have often forgotten that the border is home to millions of people. Too often, the voice of a few border residents claiming that the border is “out of control” and needs to be secured is given more importance than the voices of the broad spectrum of our community who understand that cross-border economic, cultural and social cooperation is our lifeblood and the safe and efficient flow of people through our ports of entry is essential. 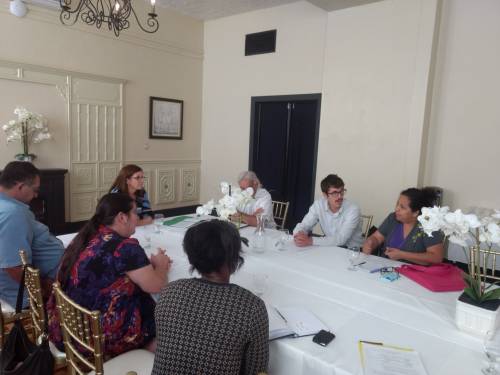 Holly, a participant in a delegation from Central PC in Colorado said: “What we hear about the border is LOUD,” and the discourse is angry and fearful. Our efforts at “border security” have often impeded our community security and have had a detrimental impact on the poor as well as people of color—citizens and non-citizens alike.

In September, President Trump decided to end DACA (Deferred Action for Childhood Arrivals), an immigration policy that President Obama enacted that provided some relief to around 800,000 persons who had been brought to the United States as children without authorization from the US government. DACA provided opportunities for the young people to work, to go to school and to live without fear of deportation—it did not give them a permanent solution to their immigration status.

Some Douglas community members and Mayor Robert Uribe expressed their concern about the situation and asked us what we were going to do as a faith response. We provided leadership to organize a Douglas For DREAMers vigil, joining with faith communities and communities of conscience in many parts of the US. While people in the community knew DREAMers (the term used for those receiving some protection from DACA) in other places, we did not know any DREAMers in Douglas.

To be honest, I felt a little awkward holding a DREAMers vigil without knowing any DREAMers in Douglas. I was there because people in the community I respected looked to our ministry for leadership. 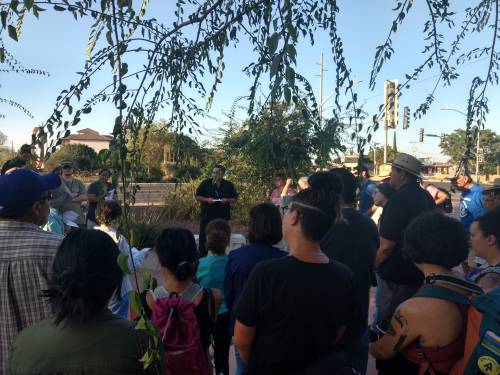 Del Cabarga, leading liturgy at the Douglas for DREAMers Vigil

Gathering together in Linear Park just five blocks north of the recently renamed “Raul Hector Castro Port of Entry,” a wonderful cross section of our community came together to express our solidarity with DREAMers we did not even know. Initially, we had developed a very rigid liturgy so as not to have the gathering become a political shouting match. However, the Spirit moved and Del Cabarga, who was leading the liturgy, opened it up for folks to speak. 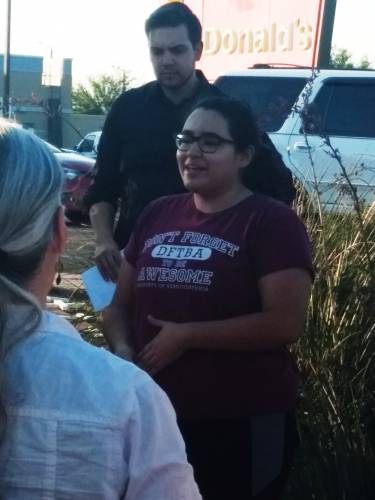 Diana, sharing her dreams in public for the first time.

Immediately, Diana, a young woman who is one of our children’s favorite librarians at the Douglas Library, came to the front and floored us all.

“My name is Diana and I am a DREAMer. I have never told people here in Douglas that I am a DREAMer. This morning I woke up to a nightmare and was very afraid. Then I saw on Facebook that you were having this vigil and I realized that I am not alone. I also realize that I cannot stay quiet any longer and you are giving me the courage to speak. This is my country and I love it. This is the only home I know.”

Luis, another DREAMer, was there with his mother and father, a pastor and colleague in ministry here in Douglas whom I have known for over 15 years.

In the face of a nightmare, a young sister and a young brother in Christ are working to make our community a better place and are dreaming of being fully welcomed by the country that they love.

We commit to not only to dream with them, but also to stand in solidarity with them and work for a change in the law that will include Diana and Luis and hundreds of thousands of other DREAMers. We are grateful for your support of our ministry and invite you to dream and work with us for the day when all who call the border home and all who visit encounter opportunity and welcome.