“Run, Miriam, Run! They might arrest us!” Father Bob encouraged Miriam to return to Mexico before the authorities returned.

It was an extremely cold night and it had not been our intention to cause trouble, to anger law enforcement, and definitely it was not our hope to be arrested. When no one had shown up at a dinner party that Miriam and I had arranged, Miriam said: “You know what the Good Book says, ‘If the invited guests don’t come, go out to the highways and byways, and invite people in.’ Let’s take the food down to the border where they are deporting our sisters and brothers.”

From the failed dinner party in the warmth and comfort of our home, we set out to the cold and dark streets of Douglas (and later Agua Prieta) to seek to provide food for the hungry, water for the thirsty, and welcome to the stranger. Little did we know that following the way of Jesus would cause such a stir among the political and economic powers on both sides of the border.

After we offered food and coffee and blankets to the first 40 men (some without even jackets, none prepared for the below-freezing weather nor the hard streets of Agua Prieta that awaited them), who were released about 100 yards north of the border and sent walking south, an officer from the U.S. Port of Entry came out to confront us.

“You can’t be doing this,” yelled the officer. “We don’t want these people in the United States, and you are giving them food. You are encouraging them to stay.” 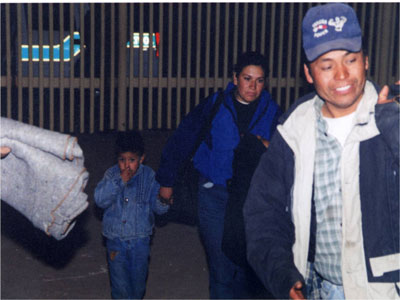 Family being returned into the cold

It was 2 am and 26 degrees when the Border Patrol dropped off the last group of women and men. They were from Puebla and had no money and no place to stay in Agua Prieta, a town where they had no connections.

We invited them to wait for us on the first corner in Agua Prieta, where we’d pick them up and take them to a safe space.

After we drove across, the shivering women and men piled in to our car and our colleague’s truck. Before we could drive off, two men came to the drivers’ windows and began banging and shouting: “You can’t do this. This is our job.” They were taxi drivers who were connected to the smuggling industry. Their job was to deliver people who were returned from the United States to the smugglers.

I explained that these folks had no money and that they were going with us. “We are going to call the police,” they threatened.

“Go ahead and call the police,” I responded and we drove off to a warmer place.

Six blocks into our drive I saw the blue lights as we turned. We stopped and awaited their arrival. The police were satisfied with our explanation, but the taxi drivers who arrived later and began shouting that the police should arrest us because we were coyotes and were illegally transporting our sisters and brothers we had just met. “They can’t do this! It’s illegal! They are not taxi drivers. They are coyotes,” shouted one of the taxi drivers.

Maria Guadalupe, one of the group from Puebla, began proclaiming in a very loud voice: “Yes they can do this. We are sisters and brothers in Christ! You quit bothering them! We are Christians. We are family. Stop threatening our family.” 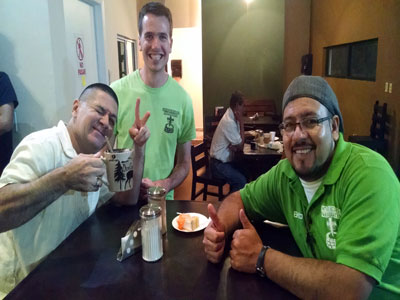 No one got put in jail that night when we rather naively sought to do what the “Good Book” says. It was kind of a crazy start of what would become a ministry called the Migrant Resource Center, whose catch phrase is “Vivamos Siempre Como Hermanas y Hermanos!”/“Let’s always live as sisters and brothers!”

Following that night we made sure to reach out to the leadership on both sides of the border to let them know who we were, and what our goals were and the support we needed from them. We began to develop relationships with churches of different denominations that historically had not worked together to partner with us as we sought to be a compassionate presence of the body of Christ on the border. Presbyterians, Catholics, Methodists, Quakers, Mennonites, Jewish, people of conscience; rich and poor; U.S. and Mexican and of many other nationalities; different political backgrounds—“a strange community” as one visitor said, adding, “in the best sense.”

On June 30 we celebrated the 10th Anniversary of the Migrant Resource Center (MRC). As important as the reality is that we have welcomed over 87,000 men, women and children, perhaps equally important is that we have embodied the reality that we are family. We are sisters and brothers who have come together to seek a more compassionate and just world. 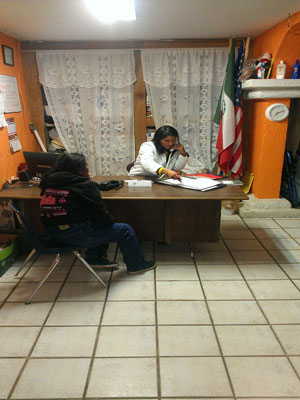 Thinking back over these past 10 years, there are so many stories of sorrow and hope. Juana, a middle-aged woman who was attempting to be reunited with her family in the U.S., only to be caught and sent back to Mexico, entered the MRC with her head hung low. As she was received with warmth, coffee, a burrito, a phone to call her family, and a safe place to be her countenance began changing. As we were giving her a ride to the women’s shelter where, she shared that she would never have imagined being received with such love in Agua Prieta . . . “It’s been like a mother’s embrace.”

Yes, we are family who come from many places, from many faith traditions, from many cultural, political and economic backgrounds.

We thank you for helping make it possible for us to serve together as part of this strange family on the U.S./Mexico border! Over the next nine months we will be based out of Clover, S.C., on interpretation assignment. We hope that we have the opportunity to see you as we share in churches, presbyteries, seminaries, and universities how God is at work on the U.S./Mexico border and beyond!