Make A Donation Click Here >
Home › What We Do › Where We Work › Co-workers › Boxes, Bags and Gratitude

A letter from the Adams Maldonado family serving in Mexico

“Muchos de nuestros hijos fueron al norte, y unos regresaron en cajas.  Pero ahora gracias a Cafe Justo nuestros hijos estan regresando a cultivar café con nosotros. Many of our children went north (to the U.S.), and some returned in boxes (coffins).  But now thanks to Café Justo our children have returned to cultivate coffee with us.”

Reynaldo Cifuentes, founding member of Café Justo, welcomed the delegation of small business owners that we facilitated at the end of September with these words. Café Justo is the farmer-owned coffee roasting and exporting cooperative that we helped start 13 years ago to address root causes of migration.

The delegation was a wonderfully strange mix of millennials, Gen X-ers, and baby boomers; Presbyterian, Catholic, Pentecostal, Jewish agnostic, evangelical and religiously disaffected “seekers”; white, brown, and black; Chicano, Mexican-American, Dominican-American, Mexican, and Anglo-American; a synod executive, the chef of Stony Point, one of the national conference centers of the PC(USA), coffee shop owners, shoe store owners, a mayor, a member of the Mexican consulate; politically conservative, moderate and progressive—in short, a slice of heaven. 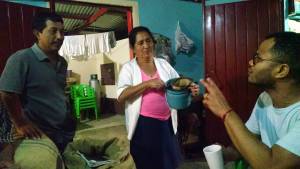 Robert Uribe (right), owner of Galiano’s Café, visiting in the home of Lilia Velazquez and her son, David Cifuentes Velazquez. David, a Presbyterian elder, is another of the sons who have been able to return home because of Café Justo.

The delegation shared a common desire to know more about the vision and reality of Café Justo that each of them had been partnering with—some for many years, others for less than a year.  The farming families welcomed us, inviting us to share deeply in their joys and sufferings.  We spent a wonderful week experiencing life—and abundant life—with an amazing community of coffee farmers who shared with us their love of the land, their families and their community.

We shed tears of joy and of sadness with Samuel Hidalgo and his wife, Evangelina.  While Evangelina prepared us one of the many delicious meals we were to have throughout the week, Samuel proudly shared with us his beautiful coffee “fields,” but he wanted to make sure we understood that “he was not the owner of the land, only a steward of what is God’s.”

Around the dinner table their 26-year-old son Samuel and only child would come in and out, sometimes awkwardly blurting out, “bienvenidos gringos.”  He had almost drowned in the river when he was a teenager, suffered brain damage, and now was almost completely dependent on the care of his parents.  Giving thanks that they had not had to put their son in a box and bury him, the reality of the sadness of not being able to pass on the legacy of the coffee to the son was palpable.

We shared a night of bellyaching laughter around the table of Dona Soraida, founding member of Café Justo, together with Edmundo, her son, Imelda, her daughter-in-law, and Teresa and Madalein, her granddaughters.  Edmundo, one of the children of the community who had gone to the “norte,” had been in Atlanta when Café Justo began.  We join Soraida, Imelda, Teresa, and Madalein in giving thanks that he was able to come back in a bus and not a box.

Soraida has now “retired” and passed on the farming responsibilities to Edmundo.  Madelain will receive her R.N. certificate in January and Teresa is studying biochemistry in the university.  Edmundo and Imelda are proud of their daughters and thankful that they are the first in the family to not only graduate from high school but also go to college.

Danny Ortega, mayor of Douglas and owner of Ortega’s Shoes, reflected on his experience: “I have just experienced one of the most incredible trips of my life, thanks to Café Justo. . . . I left Salvador Urbina a much better person, changed by the families that I had the opportunity to meet. We stayed with Jaime Escobar Castillo and his beautiful family; this family welcomed my wife Anne and me with open arms. . . . The sharing and laughing around the dinner table was the best moment, realizing that we had more in common than I thought. The discussions we had were thought-provoking, funny and very personal. There was joy in the home and a true sense of family. 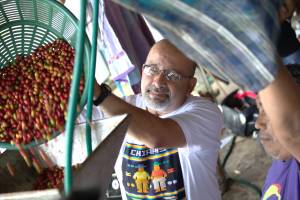 “I was so impressed with the family’s concern for the environment and the future; they continually worried about the impact of what we were doing to our planet and the effect it will have on our children and grandchildren. . . . I will always cherish my late night talks with Jaime, and consider him a friend.”

A week after we returned, a delegation of 14 folks joined us from Oregon for our weekly prayer and biblical reflection that we facilitate for the staffs of Frontera de Cristo and Café Justo.  The 26 persons in the room were born in five different states of Mexico and 10 different states of the United States.

During the time of sharing gratitudes Hermano Pedro, the roaster of Café Justo and an elder of the Lirio de los Valles Presbyterian Church, gave thanks to God for the power of the bag of Café Justo and the little seeds that it contains.  “Mira como nos ha unido—gente de muchas diferentes partes buscando un mejor relacion entre nuestros paises.”  Look how it has united us—people from many different parts seeking a better relationship among our countries.

We are grateful for the opportunity to build relationships and understanding across borders and for the strong bonds that have been created between Frontera de Cristo and Café Justo over the last 13 years that help make possible life-changing encounters between folks from the North and South, coffee producers and those who sell their coffee.

Together we are able to experience a foretaste of God’s kingdom where wolves and lambs will live together in harmony and where children are no longer forced to leave home only to be sent back in boxes.