A letter from the Adams Maldonado family serving in Mexico

“What do you think about when you are suffering?”

For the Good Friday service the leaders of Iglesia Presbiteriana Lirio de los Valles (Lily of the Valley Presbyterian Church) had asked seven persons from the congregation to give a reflection on one of the seven last “words” of Jesus.  Among those asked to provide leadership for this solemn service were two children—one being Anna Flor, our 11-year old daughter.  The “word” that she was given was Jesus’ words to his mother and beloved disciple from the cross:  “Dear woman, here is your son. . . . Here is your mother.”

Anna Flor looked out at the congregation—a congregation that has experienced a tremendous amount of suffering: the sickness and subsequent death of Pastor Rodolfo in December; the loss of leaders; broken relationships; a large percentage of the congregation far from their homelands and in “economic exile” in Agua Prieta, where they seek to respond to the question “How can we sing the Lord’s song in a strange land?”  Anna Flor looked out at them and asked, “What do you think about when you are suffering?” 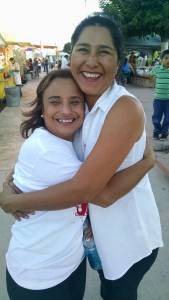 We are privileged to have Iglesia Presbiteriana Lirio de los Valles as a strong church partner of Frontera de Cristo, the ministry with whom we serve.  Despite the fact that their parent denomination “divorced” our parent denomination four years ago, the church and their leaders are committed to binational ministry and to continuing to live as sisters and brothers and seeking to discern how God is calling us to be in ministry in the borderlands.

We are also very grateful for the privilege to have accompanied, prayed with and cried with them as they have dealt with great adversity.  Yet, in the midst of all of the challenges the church has faced, we have been amazed by their faith and trust in God “who entered fully into the suffering of the world in Jesus and knows our suffering.”   In the midst of what could have turned them inward, they have chosen the text “Called to Serve, Not to Be Served” as their theme for the year.

Last weekend the church partnered with the Coalicion de Comunidades, a coalition of groups and individuals seeking to make their communities healthier places, to lead a day of service in Los Alamitos—the community with the highest at-risk children and youth population, with a  high incidence of drug abuse and crime.  Working side by side with the community, the church helped clean up and beautify the community, planted drought-resistant trees, led a Bible School in the community park for children, many of whom are not part of a church community, sang, and provided drug prevention and smoking cessation workshops.  They also invited a delegation of confirmands and their mentors from Southside Presbyterian Church, whom we were facilitating, to lead games and otherwise participate. Sister Lorena was amazed at the response of the community and gave thanks for the families of Monze and Marta, who both expressed desire to get to know God more in depth and offered to support the church with their float for the annual “Marcha Para Jesus,” an ecumenical parade that celebrates the love and forgiveness of Jesus and the unity of the body of Christ.

The Lirio de los Valles congregation has thought of others in the midst of their own suffering and are being a great blessing—encouraging the community to continue organizing to make their neighborhood a healthier place for their children to grow up.

As we have reflected on Anna Flor’s sermonette and on how we have seen Lirio de los Valles living it out, we have recognized a pattern of God bringing forth blessing out of suffering—not just from the cross to the empty tomb over 2,000 years ago, but here and now and throughout our ministry.

A single mother of Lirio de los Valles, abandoned by her husband, shared a vision of providing welcome and a safe place for women, men and children who were being returned to Mexico from the United States.  In June the Migrant Resource Center will celebrate its 9th anniversary.  Over those nine years more than 85,000 men, women and children have received blessing in the midst of their suffering.  Rosita, a woman who had returned home to Mexico from the U.S. to visit her dying mother, arrived at the Center after having failed in her attempt to return to the U.S., her home for the past 12 years, to be reunited with her husband and children.  She broke down in tears and gave thanks to God: “I never would have imagined having a welcome like this . . . it’s like a mother’s embrace.” 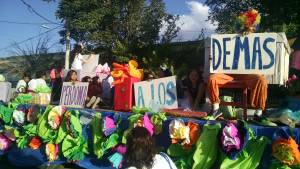 “Forgive One Another”: The Float Delegation of the Lirio de los Valles Delegation in the Marcha Para Jesus

Eduardo, a displaced coffee farmer, arrived limping at the Lirio de los Valles sanctuary—scraped, battered and bruised after an unsuccessful attempt to enter the U.S.   He shared that “to leave our land is to suffer . . . but if we could only control our coffee we could stay on our land.”   This year Café Justo will celebrate its 13th anniversary and the vision of Eduardo has helped allow over 200 families in four communities to stay on and/or return to their land.  Eri, one of the founders of Café Justo, shared: “I give thanks to God for the suffering we experienced, because now we experience more profoundly the joy of what God is doing in our community.”

Recently we have been troubled to hear the news that Presbyterian World Mission is experiencing a substantial funding shortfall and unless something dramatic changes, up to 40 mission co-workers will be recalled from serving with our church partners in different parts of the world.  We do not take this lightly, but we also realize that this suffering that our church is experiencing is not as much as Jesus suffered, and we know that suffering is not the last word.   We continue to serve and pray in anticipation of how God will bring forth blessing from the midst of the suffering here in the borderlands and in the church.

We are grateful for your encouragement, prayers, and financial support that help make it possible to live and minister together with our sisters and brothers on both sides of the U.S./Mexico border!