Jonathan and Emily are periodically in the United States and available to speak to congregations as their schedule permits. Email them to extend an invitation to visit your congregation or organization.

About Jonathan and Emily Seitz’s ministry

Since 2009, Jonathan and Emily Seitz have served at the invitation of the Presbyterian Church of Taiwan.

Jonathan teaches at Taiwan Theological Seminary in Taipei, the capital of Taiwan. Most of Jonathan’s students are preparing for pastoral ministry. Taiwan Seminary traces its history to 1872. Students are about evenly split between men and women. About a quarter of the students are first-generation Christians, while others trace their faith back five or six generations. Students are mostly ethnically Taiwanese, but there is also a mix of indigenous and international students. After graduation, ministry students draw straws to determine in which part of Taiwan they will begin their ministries, and they are usually assigned to rural churches. Jonathan teaches classes related to mission, religion and world Christianity.

Emily works with a university chaplain, faculty and students at a Presbyterian university — Aletheia University — in the historic city of Tamsui, which was once the center for the Presbyterian church in northern Taiwan. Aletheia, founded in 1882 by the Canadian Presbyterian George Leslie Mackay, was actually the first college in Taiwan. When one of the original campus buildings was restored to become a museum, Emily was invited to help there. Her responsibilities include introducing the life and work of Mackay to individuals and groups from all over the globe, as well as assisting with the production of English language displays and materials. Emily also volunteers in the Seitz children’s schools, thereby engaging in a ministry of presence in the local community.

Taiwan is an island nation that sits between China, Japan and the Philippines. One of the “four dragons” of East Asia, Taiwan is known for its rapid economic change. Taiwan’s international status is ambiguous. A vibrant “sunflower movement” influenced discussions about global trade and Taiwan’s relationship to China in 2014. Taiwan elected its first female president, Tsai Ing-wen, in 2016. Major questions for the future include Taiwan’s relationship to China and the global community, changing demographics (a low birth rate, rising immigration and an aging population) and social change.

About Emily and Jonathan Seitz

The Seitzes have often been moved by the passion of ministry students for the work they do. “One of the biggest influences on my prayer life,” says Jonathan, “is being part of the seminary community at Taiwan Theological Seminary. At meals and before classes, during Bible studies and in worship, Taiwanese students and teachers pray. Taiwanese sometimes pray kaikou, or “open mouthed,” a format where the whole group or congregation sort of mumble their prayers together. At first this seemed quite alien to me, and only gradually did it become familiar and even meaningful. The time we have spent as part of this community reconverted me.”

Jonathan was born in Congo but grew up in the U.S. He was baptized by a Congolese pastor (Rev. Ntolo) in the Tshiluba language. Growing up in the U.S. in Virginia and Ohio, he was always curious about the world church. Jonathan completed his Ph.D. at Princeton Theological Seminary in its History and Ecumenics Department. After graduation, he was a part-time lecturer at Princeton University, assisting professors with classes on Buddhism and the history of modern East Asia, and an adjunct professor at Princeton Theological Seminary, teaching courses on ecumenics and world Christianity. He also taught world history for a year at Centenary College. Jonathan studies Christianity in Asia. He co-edited the book Asia in the Making of Christianity and is a member of the steering committee for the American Academy of Religions’ “Chinese Christianities” Seminar.

Emily was born and raised in Cincinnati, Ohio, and never imagined she would one day live overseas! She completed masters and doctoral degrees in Library and Information Science at Rutgers University (New Jersey). While living in NJ and attending graduate school, she worked in reference and youth services in public libraries. She has also volunteered in her children’s school libraries. Emily enjoys libraries and information services of all types.

Jonathan and Emily met at the College of Wooster in Ohio. Jonathan was ordained as a minister during regular worship at Grace Taiwanese-American Presbyterian Church in Lawrenceville, New Jersey, in 2005, and Emily became an elder in 2007 at Westminster Presbyterian Church in Trenton. Jonathan and Emily have three children — Samuel, born in Princeton, NJ, in 2008, and twins Eva and Eli, born in Taipei in 2010. Samuel, Eva and Eli are busy, bilingual elementary school students who participate in a wide range of extracurricular activities, including art classes, ping pong and Scouts.

Watch a video of Jonathan and Emily Seitz 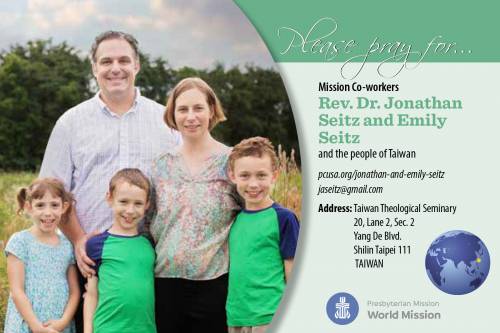 Use this card as you pray for Mission Co-workers Jonathan and Emily Seitz. The card includes a photo and overview of their work. Jonathan and…

Give to the ministry of Jonathan and Emily Seitz