Building a Life of Faith. Support the Pentecost Offering..
Make A Donation Click Here >
Home › What We Do › Where We Work › Co-workers › Learning as I Teach

One of the things I love about Taiwan Seminary is the way is the way it is part of God’s mission in Asia. Although Taiwan Seminary primarily produces leaders for the Taiwanese church, with about 98% of our graduates serving small churches throughout Taiwan, it also trains leaders from other Asian countries and sends graduates to serve in other countries. For example, I have a student from Malaysia who is writing a senior thesis on Christian-Muslim relations. Additionally, there are often visiting Chinese scholars at our seminary; they are grateful for a first-rate library with great Chinese resources. For the core course I teach, I’m inviting a Taiwanese couple, graduates of Taiwan Seminary who are currently serving in Myanmar, to speak to my class. I feel an affinity with this couple because they are now several years into mission service and face many of the same challenges our family has experienced (language study, two small children, working between church and school). There is another Taiwanese couple (the husband is a Taiwan Seminary graduate) who have recently gone to serve as missionaries in Japan, and it is fascinating to follow their efforts to get established. I am very grateful for these fellow co-workers.

I was thinking about this as I tried to develop a course that not only speaks to Taiwanese students but also connects them to God’s work in the wider world. This semester, for the first time I’m teaching a course on Asian Christian mission. It’s slanted towards modern East Asia, so after a short section on early Asian Christianity, we spend some time on the Catholic era and the early Protestant missionary movement, and we then move towards the present. Because we live in Taiwan, it is especially interesting to look at how the Taiwanese story compares to neighboring stories in China, Japan, and Korea. 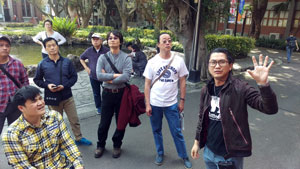 The students this semester are very interesting. Most are in their first or second year of seminary. We have several who are from minority indigenous groups on the east coast of Taiwan, so part of my class focus will be on minority Christian groups. In Taiwan, the indigenous peoples, many of whom live in the mountainous regions of central Taiwan or along the east coast, were among the first to convert to Christianity and are still majority Christian in comparison to a very low rate of Christianity in Taiwan overall. A trend in Asia has been that often minority ethnic groups become Christian at a very high rate. There are different theories on why this happens: Christianity’s innate “translatability,” the way it may affirm the local identities of those whom have been mistreated by majority culture, or affinities between Biblical themes and community life. I find these students’ faith inspiring and their perspective as ethnic and religious minorities interesting, and I am grateful for the chance to work with them.

At the start of the semester, we went to the premier of Martin Scorsese’s Silence, a film that was of particular interest because it was shot in Taiwan and reveals the struggles of reconciling Christian and Japanese identity. In the 16th and 17th centuries, Christianity grew quickly in Japan. At its height, around 130,000 Japanese (nearly 10%) were Christians. However, as waves of persecution began, Christianity struggled and began a sharp decline. The movie offers several different perspectives on Christianity, and the viewer sees how local church leaders, foreign priests, an apostate priest, an apostate Christian, and government leaders conceive of what it means to be Christian. Our class discussion afterward was an interesting one that touched on what it means to be Christian in challenging times, how the role of mission has shifted, and how different people respond to the same crisis in different ways. Taiwan has religious freedom, but Christians overall are a small minority and students shared about how they experience this. 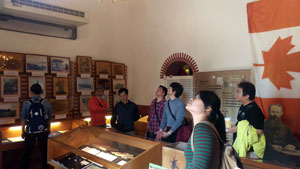 For a short unit of the course that focused on Taiwan, we visited Tamsui, the coastal city where Presbyterians first worked when they came to northern Taiwan. We visited two small museums and then met with Louise Gamble, a Canadian mission worker who lived in Taiwan decades ago and then returned here after she “retired” more than a decade ago. She’s guiding work to transcribe, digitize, and translate historical records from Taiwan’s early period of mission. Part of my goal is to discuss how we tell the story of Christianity in East Asia. It’s easy for us to get hung up on faded images of the Christian life. Yet, I’m always amazed by the vibrancy of Christian life in different places and times. Visiting Tamsui helped us track down pictures of early church leaders, learn about the first decades of Christian life in Taiwan, and see some letters and other records that have been preserved.

In March, I was moved by obituaries for an earlier generation of mission workers. Milo Thornberry, who taught at my seminary and was deported during Taiwan’s authoritarian era for helping a famous dissident, died on March 8. Thornberry received an honorary degree from my seminary a few years ago, after he wrote a memoir about his time in Taiwan. This month also saw the death of John Geddes, another co-worker who taught in Tamsui for almost 50 years. The story of Westerners is always a small part of the larger story of the growth of world Christianity, but it is always inspiring to learn about the work of earlier generations. In some cases, as in Thornberry’s, they witnessed by taking a stance that was personally risky. In others, as in Geddes’, their teaching across decades left a mark on thousands of students. One of my students, Zoe, was surprised to hear the news, and told me that both she and her mother had studied with Geddes.

We thank you for sending us and supporting our ministry financially and through prayer, and we ask that you continue to do so. We thank you for your commitment to work in Taipei, throughout Taiwan, and wherever the Spirit goes.