Recently a third-year student at Taiwan Seminary, “Jane,” told me about her first job after university. Jane’s father died when she was a toddler, but she grew up in a Christian family and worked hard to attend university. Jane’s undergrad degree was in animal science and after graduation she took a job on a cattle farm. She did everything from feeding and cleaning up for the animals to delivering newborn calves. In this job she’d typically wake at 4 am and work until noon, then rest, then work from 3 pm or so until 9 pm. It was a seven-day-a-week job, but her employer let her go to church on Sunday morning, for which she was grateful. 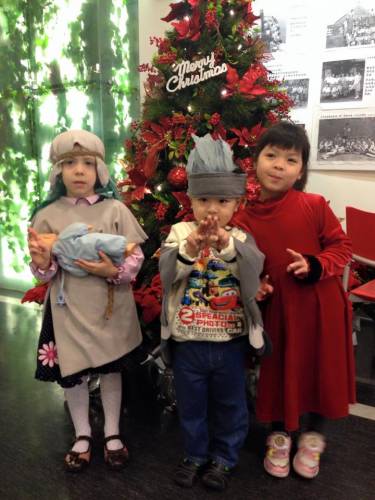 Eva with friends at church

One night a calf was born. Jane set it down in an enclosure, knowing it that it would soon be able to stand (perhaps an hour later), but not expecting it to wander off. Later on, when the sun went down, she found it had already disappeared. She searched and searched, then found her boss and they searched together. Later, in the morning, she noticed that while the wind had blown the hay in one direction, there was an area that stuck out. She found the newborn calf, hoisted it over her shoulders, and carried it back to its mother. She said she felt a bit like those iconic images of Jesus the Good Shepherd, with a lamb over his shoulders. She didn’t stay in this job long, but it was during this time that she realized that she was called to ministry. In her calling and searching she was reminded of God’s calling and searching. Now Jane is in her third year of seminary and in another year she’ll hopefully begin her own work as a pastor.

And there were shepherds living out in the fields nearby, keeping watch over their flocks at night  (Luke 2:8).

In the Christmas scenes depicted in Matthew and Luke we see imagery that will come to mark Jesus’s own life and ministry—the hints that Jesus is King, Lord, Light of the World, God Incarnate, God-with-us Emmanuel, and the Good Shepherd. These images are so familiar to us that we may miss the ways in which God’s call comes to people, not just among stars and angels and wonder but also as they watch over their flocks and finish 16-hour workdays. 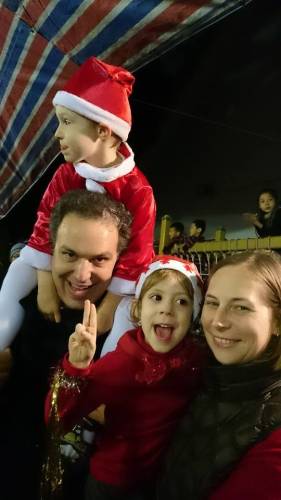 Jonathan and Emily with the twins, Eva and Eli, for a Christmas performance

I am truly grateful that church leaders are called from all types of backgrounds. By most standards animal husbandry is not the background discipline one would expect prior to pursuing pastoral ministry, and yet Jesus called fishers and tradespeople, accountants, and widows to walk with him. Our students at Taiwan Seminary also come from a wide range of backgrounds. In our current group of first-year students most are coming to seminary later in life, often in their 30s and 40s. Some have run businesses, parented, or served in local churches as music leaders, teachers, deacons or elders. These future pastors come out of backgrounds in education, engineering, the sciences, and a wide range of trades. About half of these students are first-generation Christians, called first to follow Christ by becoming church members and then experiencing a call to pastoral ministry and to study at seminary, while others like Jane come from families that have been Christian for generations.

I’m often humbled by how much patience, fortitude and integrity my students show. When I feel exhausted, tongue-tied, or beset by life and ministry here, I find a lot of comfort in knowing that the students we graduate are really exceptional pastors. I often tell them that I would be grateful to have almost any one of them as my pastor.

We are very grateful to be here in Taiwan. The year 2016 beckons as a year with a lot of uncertainty in PC(USA) World Mission. We’re grateful for the support that brought us here and hope that you will continue to support us with your financial gifts, your continued prayer, and your encouragement.  If you have not yet supported our ministry financially, won’t you please consider doing so?