Building a Life of Faith. Support the Pentecost Offering..
Make A Donation Click Here >
Home › What We Do › Where We Work › Co-workers › Behind the Headlines

A letter from Jonathan Seitz in the U.S., on interpretation assignment from Taiwan

In February, just after we returned to the U.S. for our Interpretation Assignment, a 6.4 earthquake hit southern Taiwan, took down a 17-story building, and killed over 100 people. This last earthquake was centered in Tainan, which is one of the Presbyterian Church in Taiwan’s historic centers. The Presbyterian hospital there was part of the disaster relief. The Presbyterian university there lost a student in the earthquake (the student was given a diploma posthumously). We recall that shortly before we came to Taiwan in 2009 it suffered its large “Father’s Day typhoon.” Our seven years of mission service have been bookended by disasters.

In visiting the U.S., when we talk to people about Taiwan we find that many people know about this small island nation only through a few stories that cycle in the press, about “earthquakes, the economy, and education.” Often these stories are about disasters, like that earthquake. Other stories often address the economy (think: “made in Taiwan”). Taiwan is still a major semiconductor producer and some of its brands (Acer, Asus, HTC, Huawei) are more and more familiar to U.S. consumers. The Taiwanese economy, however, is struggling, part of the turmoil of competition with countries in the region over low wages. In Taiwan I often meet students or 20-somethings who work in the tech industry, scrambling through 60- or 70-hour workweeks in lower-paying jobs. Some people also know that Taiwan often scores high on standardized math tests, but shows mixed results for quality of life. Whereas in U.S. churches we often lose our high school students to competing activities and Sunday morning sports, Taiwanese churches often struggle to hold students who are prepping for high stress tests for junior high, high school, and college.

Jesus came and stood among them and said, “Peace be with you.” After he said this he showed them his hands and his side. Then the disciples rejoiced…  John 20:19-20

Part of our job in Taiwan is to move behind and beyond the earthquake, economy, and education stories. We’re grateful that the church responds to disasters, that it promises rest to weary workers, and that it seeks to minister to weary test takers. And we’re grateful that Presbyterians hold up an alternative image of success—one defined by one’s relationship to God rather than by the ultimate degree or job. 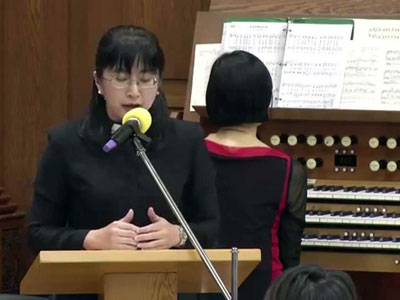 In Taiwan, Easter still isn’t hyped much in the media, and it rarely means a day off for workers (sometimes it coincides with a traditional “day of the dead” type festival). The Taiwanese church is also not especially focused on high liturgy or ritual, so there’s little emphasis on Lent, and often no Maundy Thursday or Good Friday services. At the same time, in Taiwanese Easter translates directly as “Resurrection Day” (Koh-oa̍h-cheh, or literally “Again life day”). This expression is more direct, more jarring, than the pastel flowers and Easter bunnies I’m used to in the U.S. The focus is overwhelmingly on bearing witnesses to the resurrection. As in the ancient church, Easter is one of the Sundays when new members are baptized. From beaches and sanctuaries, mountains, and street corners Taiwanese Christians wish everyone a “Happy Easter.” “He is risen,” they say, and “He is alive.” One of the experiences that first grounded us in Taiwan was attending an Easter service at a tiny urban Amis (native ethnic group) worship service. Since Easter coincided with the national holiday of tombsweeping day, many of the church members took a rare breather, returning to see family on the rural east coast. That Easter was the simplest we’ve ever attended. Pastor Abay talked about the resurrection, about Jesus’s empty tomb, and about the hope we have at Easter.

A lot of our news in life is about tragedy and struggle—the earthquakes, economic reports, and educational requirements—but at Easter we also worship around the world, remembering that life ends not in tragedy but in Resurrection!

While here in the U.S we continue to pray for Taiwan and correspond with friends there. During Easter week I enjoyed scrolling through pictures of students and graduates working in Taiwanese churches.

We’re grateful for the chance to be in Taiwan and to serve together with churches there and in the U.S. We thank you for the support and encouragement you give to us through Presbyterian World Mission. Your financial gifts provide for our sending and support. Your prayers and your frequent letters are a constant source of encouragement. If you have not contributed to our ministry in the past, please prayerfully consider becoming one of our family of supporters.