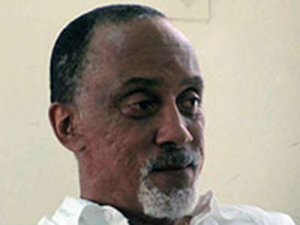 For the Rev. Kevin Johnson, the assassination of the Rev. Dr. Martin Luther King, Jr. and its aftermath   became a turning point in his life. Raised in Washington, D.C., Johnson climbed the stairwell of a high rise under construction after the shooting and witnessed a city in anger as riots broke out in the nation’s capital.

“That was a watershed moment, to really look at the landscape of the city after his death,” he said. “I was able to look out over the treetops and see the flames coming from above the trees and the some billowing up into the sky.”

Johnson says he began to grapple with the question of what could make people respond in such a violent, angry way.

“The riots in D.C. had an interesting dynamic, similar to the Hebrews narrative with the Passover. There the people of God were instructed to put the blood of the lamb over their doors and the death angel would pass over,” he said. “In D.C. if you had a small family business or store and you wrote ‘Black is Beautiful’ on the window, the looters would pass your business over.”

Johnson was raised in a Christian family, attending a predominantly black Baptist church where he would be ordained. He later served as a community organizer and children’s ministry staff member with the Sojourners Community and eventually moved to the Presbyterian Church (U.S.A.). For the past 22 years, he has served as pastor of Calvary Presbyterian Church in Detroit. He has served on the Advisory Committee to the General Assembly on Social Witness Policy since 2012.

The theme for this year’s CPJ Training Day is “Confronting Chaos, Forging Community–Racism, Militarism and Materialism.” Johnson will be one of the keynote speakers. He says a big challenge for those who choose to get involved in peace and justice work is the need for self-purification, as King himself spoke of during his civil rights work.

“One of the challenges of the social justice movement in America is the fact that we are so steeped in this world. It’s a part of our existence. Even for those of us who call ourselves champions for justice and peace, we are drinking the Kool-Aid,” said Johnson. “We have pension programs and we’re worried about investments and IRAs, but we have not divested ourselves from the very sins and evils of this corrupt society. We are out here protesting for a just society and yet we are drunk with the wine of the world.”

Johnson goes on to say that he believes the country has not reconciled itself to its origin.

“Violence is such a part of the American story, the violence perpetrated against those who were already living here when foreigners came to the American shores. They literally took this land by force,” he said. “The whole idea of race grew out of the posture of privilege over every other component of society, especially people who were brought here from Africa.”

Johnson says there have never been reparations for the violence that was perpetrated against people in the early days of this country’s formation.

“Violence is the number one cash cow of America’s economy, and that spills into the issue of militarism and the amount of money we put into so-called protection,” he said. “America has never dealt with the race issue in a healthy way, and I don’t know if America can ever divorce or purge itself of race.”

Johnson is optimistic that those attending CPJ Training Day will come away with the hope and conviction that there is something worth living for and “we are not doomed to our own destruction.”

“You can’t find mutual interest unless you spend time listening to the stories of others,” he said. “Perhaps we can find hope in the time we spend together and hold ourselves accountable to nurturing this community.”

Compassion, Peace and Justice Training Day will be held Friday, April 21 at the New York Avenue Presbyterian Church in Washington, D.C. Other participants include the Rev. Floretta Watkins, the first African American female chaplain with the United States Air Force National Guard, and Amal Nassar from the West Bank Farm Tent of Nations in Palestine.

CPJ Training Day will be followed by Ecumenical Advocacy Days at the DoubleTree Crystal City Hotel, where more than a thousand Christian advocates gather each year for a weekend of workshops and lectures.

Loving Creator, we are grateful for the beautiful world you have created for us. Help us to be mindful as we partake of its resources. We pray that we may be good and faithful stewards in preserving and protecting its beauty and its natural riches. Amen.