First Presbyterian Church in Gainesville, Florida, shares a concert and the Good News 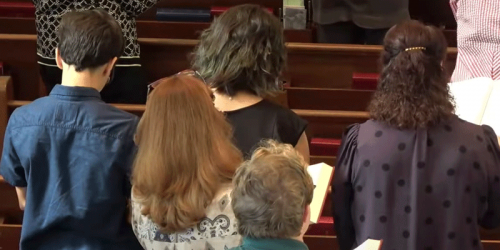 Sunday morning worship was long over with, yet the sanctuary at First Presbyterian Church in Gainesville, Florida, was filled with activity. Musicians setting their music stands at the right height. Singers warming up their vocal cords. Ushers greeting those who came for what would be an inspiring afternoon of a community showing their “Love in Action.”

For some time now, the congregation of First Presbyterian has been living out Matthew 25 — challenging themselves to see Jesus in the needs of the community and then boldly acting on them. But Matthew 25 isn’t relegated to just mission committees. Matthew 25 is for all.

Inspired by the generous hearts eager to lend their time and talent, First Presbyterian’s music director, Mitch Rorick, wanted to do his part.

That’s when the idea to craft a special service, which would share the inspiring stories of the Holy Spirit working within the community and bring alive the songs of faith that echoed the Matthew 25 vision, came to him.

Those in the congregation were excited.

Rorick reached out to the church’s missions committee, where a small group began tossing around ideas. It became apparent that in addition to the songs of faith that melodiously capture Matthew 25, including “Lord, Make Me an Instrument” and “Here I Am, Lord” — an ecumenical favorite that is sung with gusto no matter what the denomination of the church is — having those engaging in the work share their testimonies would be a vital part of the program. Weaving together music and mission soon led to the perfect name for the concert: “Love in Action.” 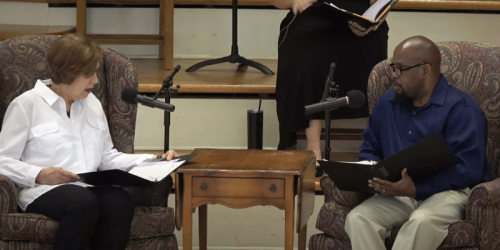 With so many stories to share, Asmuth was tasked with drafting a script “so as to keep the time from getting out of control.”

“I talked to each interviewee to get the main points of what each wanted to say and then wrote the final script,” she said.

Asmuth’s task in gathering the stories proved to be a spiritual moment as she heard a common thread of God’s redeeming love connecting them all together. Among the stories was one from the director of a local organization, Gainesville Community Ministry, who shared with those attending the concert that at age 16 he ran away from an abusive foster care home and spent the next two years homeless. With the help of others and local churches, he found the strength and the resources needed to not only make a life for himself, but a life that would help others.

In addition to music and powerful stories, an offering was also part of the “Love in Action” concert. “The offering, though, was not your typical call for money,” said Asmuth. This “offering,” she says, was the blank cards that were included in the bulletins, allowing those attending “to write an inspired action that they planned to do.”

“We wanted to inspire others to go now and ‘do likewise’ in reaching out to neighbor and stranger alike,” she said. Of course, the organizers of “Love in Action” knew there would be those who wanted to give monetary gifts as well.

“There were places in the sanctuary to deposit money,” said Asmuth, adding that funds collected were divided among the agencies that spoke during the “Love in Action” concert.

Lord God, grant us the humility and wisdom to follow the leadership that you have appointed. Grant us the willingness to perform the tasks that you have commanded for us to do. Let us be constantly reminded of your sovereignty and protect us from those who put stumbling blocks in our way. Amen.