If you visit the U.S.-Mexico border, return home and tell your story

Immigration experts share tips, encouragement during ‘Coffee with the Clerk’

Rather than trusting media or government versions of what’s going on along the U.S.-Mexico border, Presbyterians are better off engaging with people and partners in the trenches of the immigration issue. 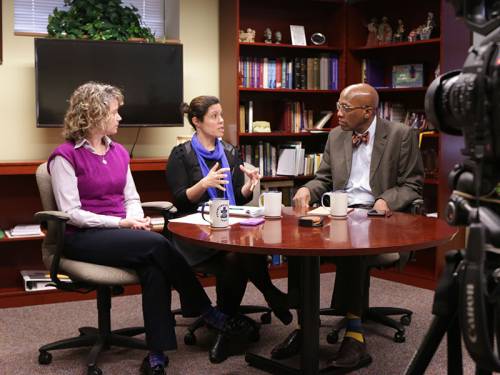 Guests during the Rev. Dr. J. Herbert Nelson, II’s “Coffee with the Clerk” Monday were, from left, Teresa Waggener, an attorney with the Office of Immigration Issues, and Amanda Craft, manager of advocacy in the same office. (Photo by Randy Hobson)

“If you are a group going to the border, tell your story when you get home,” Teresa Waggener, an attorney with the Office of Immigration Issues, told the Rev. Dr. J. Herbert Nelson, II, Stated Clerk of the Presbyterian Church (U.S.A.), during a recent “Coffee with the Clerk” Facebook Live session. Preach a sermon, write a letter to the editor or agree to an interview with a reporter, Waggener suggested.

“It is us shouting from the rooftops that changes the rhetoric,” she said.

Amanda Craft, manager of advocacy in the Office of Immigration Issues, said that hearing in person about what asylum seekers and deportees have been through “allows us to see the face of that sister or brother in front of us” and helps “us understand the way we feed a system that is really very shameful.”

“Take the time to dig,” she said, “and find out what is really happening.”

The Office of Immigration Issues brings stories straight from those whose lives are impacted through its Facebook site, Presbyterians for Just Immigration.

Increasingly, accompanying family members to centers where loved ones are being detained and grieving alongside them is “now part of the lives of a lot of pastors and elders,” Waggener said.

“Pastoral care now is sitting in an (Immigration and Customs Enforcement) office,” Nelson said. “That is becoming the role of the church in many instances.”

According to Waggener, Presbyterians have been speaking officially about immigration policy since the end of the 19th century, when Chinese laborers were barred from the U.S. under the Chinese Exclusion Act. Presbyterians were among faith organizations helping Jewish refugees to settle in the U.S. during the 1940s.

She said the refugee vetting process “is not the loose program you hear about in the media. It’s a mindful, cautious process. It’s also a welcoming, loving process,” as it was following the horror of World War II.

Craft described the roster of people currently held in detention centers as “robust,” with up to 40,000 people being detained at any given moment, about 14,000 of them children.

About 75 percent of the centers are privately owned and operated.

Nelson described companies profiting on incarcerating refugees as “a moral issue.” People of faith, he said, “have a responsibility to challenge this system. … This is not necessarily the land of the free and the home of the brave.”

Craft previously worked as a missionary in Guatemala and Mexico. “It’s so difficult to understand what the journey is like,” she said. “People come to the U.S. thinking this is the land of laws, the land of protection. They’re met by Customs and Border Protection agents, interviewed, separated from their family and placed in a detention center.”

Once detainees are released, they often find themselves in a worship service, “where you can see them breathe again,” she said. “We were always amazed how God is revealed during those encounters. We can miss that if we’re not open to it.”

It was people of faith along the border in McAllen, Texas, who brought order to chaos with this idea for aiding people waiting along the border bridge, Waggener said. Instead of reassembling the next day at the spot you thought you held the previous day, why not just create a list, in order, of those waiting to speak with immigration officials?

“They have created order out of the disorder our nation has created for them,” she said.

At the talk’s conclusion, Nelson reminded listeners it was Jesus who “called us to welcome the lost. … We have a responsibility to those who are struggling on the margins, because we have created the margins, and it’s contradictory to the gospel.”

“You can’t say you don’t know about it now,” Nelson said. “The question is, will you take the risk? Let’s get engaged and involved. There’s no reason to sit on the sidelines. We can do it. We can transform the world and this nation, and ultimately we will transform ourselves.”

Lord, we thank you for those who weather the storms and take on risk and sacrifice to reach the least. May your blessing and protection be always on them as they live out your example. Amen.