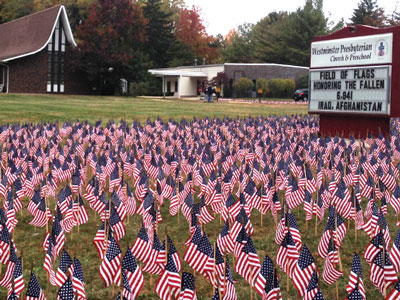 The 2015 ‘Field of Flags’ at Westminster Presbyterian Church

Each fall for five years Westminster Presbyterian Church in Middletown, New Jersey, has assembled a memorable display on its Great Lawn. Beginning in 2012, the church’s Field of Flags has displayed one American flag for every service member killed in the Iraq and Afghanistan conflicts. In 2015 the number was 6,841. When the congregation put out flags on Saturday, October 15, this year, the number of service persons killed had grown to 6,860.

The flags remained on display for a month and were taken down on Saturday, November 19.

Westminster’s pastor, the Rev. Joseph Hein, says the church got the idea from a member who’d seen such a display by a congregation in Connecticut. “The session (church council) was very interested in the idea,” he says, due to the area’s proximity to several military facilities and in support of the veterans in the congregation.

But the idea hit even closer to home for many people in the church and especially in the surrounding community.

“The 9/11 attack that kicked off the [Afghanistan and Iraq] wars, the largest concentration of those killed at the World Trade Center, lived in Middletown,” says Hein. “We’re 26 miles from New York City and following news of the attacks, everyone in the area went up to Mt. Mitchell—the highest point in town— to see the twin towers in flames. So many people were lost from Middletown.”

“The response was overwhelming from the community and congregation. It was the most emotional response to anything I’ve seen in my life. People photographing the flags— dozens of cars stopping to photograph the flags every day. Veterans would get out to salute the flags. Survivors of 9/11,” Hein says, his voice trailing off, overcome by emotion.

“Family members who’d lost loved ones in the war stopped, too,” he says. “One woman stopped and lay among the flags—taking the whole experience into her soul.”

For three years the congregation held a community-wide memorial service in conjunction with the Field of Flags. When the service was last held, two years ago, Westminster invited the families of the 119 New Jersey service members killed in the wars to attend the memorial. After a hiatus, the memorial service was held again in November. Owing to the increased death toll, 124 New Jersey families were invited to attend this years’ service of remembrance.

“There is a sense at these services, and in the display, that we’re remembering loss and praying for peace,” says Hein. “None of the veterans I know—yes, they went into combat to defend the ideals and institutions of our nation—don’t desire peace. The second year [2013] we balanced our attention, remembering not only those who were lost, but those who come home with the sounds and memories of war still in their minds.”

As the display and services shared their focus with returning combatants and their needs, the church has partnered with veterans’ organizations skilled at PTSD and re-entry assistance to ensure families have received needed support after they leave the service.

“We’ve also focused on the cost of war,” says Hein. “We lined our property with signs describing the lasting effects of war. For instance, how many military-related suicides happen, traumatic brain injuries” and so on.

He says the services of remembrances have focused on healing, praying for peace and praying for enemies. “This is important,” says Hein. “Jesus said we should pray for our enemies as well.”

Hein says Westminster has become identified with the Field of Flags as it continues to express the loss felt in the community 15 years after the events of September 11, 2001. It’s especially impactful to those who lost relatives, colleagues and friends that day.

“Each year we have over 70 volunteers from the congregation and the community who come out to set up the Field of Flags,” says Hein. “We’ll continue this event for the foreseeable future. The support is very strong.”