Lisa Larges ordained as a teaching elder in the PC(USA)

After 30 years as a candidate for ministry, ‘The long arc of God’s story’ is realized

Amidst a trilling of trumpets, a shower of stoles, and a grateful congregation’s affirming applause—interposed with the shedding of more than a few tears—Lisa Larges, a candidate for the ministry of Word and Sacrament in the Presbyterian Church (U.S.A.) since 1986, was ordained as a teaching elder at the Lake Nokomis Presbyterian Church.

Larges, who received her M.Div. with honors from San Francisco Theological Seminary in 1989, where she was also a recipient of its preaching prize, has been called to serve the small, suburban Minneapolis congregation as its associate pastor for congregational care.

At once a historic occasion and a joyous celebration—30 years in the making—Larges’s ordination called the gathered body, and not least Larges herself, both to remember and to hope. 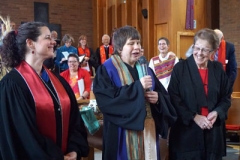 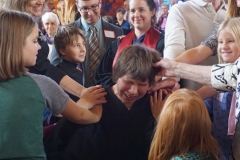 A lifelong Presbyterian, Larges had become a candidate for ministry in the Presbytery of the Twin Cities Area in 1986. Because she felt as a matter of conscience that she could not serve the church without being open and honest about her identity as a lesbian, Larges “came out” to the presbytery’s Committee on Preparation for Ministry in 1991. Thus began a long judicial process and a protracted season of discernment for her, which did not lead immediately to ordination as a teaching elder, even after the 219th General Assembly (2010) removed the church’s constitutional barrier to ordination for all who are called and qualified regardless of sexual orientation or gender identity. The assembly’s action, which was subsequently ratified by a majority of presbyteries, took effect on July 10, 2011.

Larges has said her call—along with a measure of spiritual healing of the pain of the last thirty years—came into clear focus after she had decided to return home to Minnesota from San Francisco in 2011 to be closer to her family. It was then that she found a spiritual home in the Lake Nokomis Church, where she said she “can’t imagine feeling more truly and fully blessed.”

“All along, what’s sustaining for me is being connected with the heart of the church, which is its congregations,” Larges said. “Being a member at Noe Valley Ministry for 20 some years in San Francisco, and Lake Nokomis here in Minneapolis, provided that spiritual community where I felt fully known and valued, and where I and my gifts were welcomed. Looking back over the thirty years that I’ve been on this particular ordination journey, I can’t say that I would change anything, because I doubt that any other route would have given me the same chance to connect with such beautiful and extraordinary people from all across the church, and from every theological corner. Far more than anything else, my life, and the better parts of who I am, have been strengthened and formed and refined by having the incredible privilege of knowing so very many exquisite human beings.”

In the scriptures—Jeremiah 32:1-15 and 1 John 4:17-21—hymns, anthems, presbytery commission members, and worship leaders chosen for the service, it was clear that the long-awaited day was all about love.

In her sermon based primarily on the Old Testament text, Mardee Rightmyer, director of Christian Education at Eastminster Presbyterian Church, Stone Mountain, Georgia, spoke of how the prophet Jeremiah showed his complete trust in God “by putting his money where his mouth is,” buying land in his hometown of Anathoth, which was already occupied by the Babylonians.

“Jeremiah buys into a long-term investment plan while knowing he will never see the end result,” she preached. “Then Jeremiah explains to Baruch, his former student and now faithful scribe, that the sale must be meticulously recorded as evidence that God would be faithful, that God would return the land to them in the future. But we are witnesses to Baruch’s recorded words of the long arc of God’s story, and we know God’s steadfast love was and is faithful to this promise that houses and fields and vineyards will again be brought and bought in this land.”

Turning toward Larges, she continued, “For many of us—especially those who were involved in the early movement to lead the church to that arc of good will—chances are that you were among those who weren’t sure you would be around to see the day when we could serve openly, much less have the church bless our relationships of love for one another, but we believe that the long arc of God’s goodness would indeed make it happen. And I know no one who exhibits that hope and trust of this passage more than the people in this room, especially Lisa. But even more than the hope that Lisa has clung to all these years, she has responded to every negative assault with the living testimony of 1 John where we are called to live out the incarnate love of Jesus Christ. Seems like an impossible job, doesn’t it?”

Following the sermon, the Rev. Kara Root, pastor of Lake Nokomis, called upon the church’s children to take a central role around the font in a reaffirmation of the Baptismal covenant. Then, when Sue Rutford, a ruling elder from First Presbyterian Church, Stillwater, Minnesota, and the presbytery’s moderator, asked Larges the Constitutional questions, Larges responded with a series of resounding and enthusiastic “I dos” and “I wills,” along with an occasional “I’ll do my very best,” and “You bet I will.”

After members of the congregation joined hands around the sanctuary during the prayer of ordination and the laying on of hands, Rutford declared the ordination as worshipers again broke out in thunderous applause.

The Rev. Dr. Janie Spahr—who was described in the bulletin as “beloved friend and mentor”— followed with Larges’s charge as a newly ordained teaching elder. Spahr is an honorably retired PC(USA) minister and Lesbian Evangelist Emerita for That All May Freely Serve, an organization founded in 1992 to advocate for an inclusive and welcoming church, which Larges also served.

“I believe that we have been holding our breath with you for 30 years, because it is so much to want things so much for the people that we love,” Spahr said.

Then, gesturing toward the Shower of Stoles gracing the sanctuary—a project that “celebrates the gifts of LGBT [lesbian/gay/bisexual/transgender] persons who serve God … while also lifting up those who have been excluded from service because of their sexual orientation or gender identity” she continued.

“Encircling us are these amazing stoles of people who wanted to do this kind of work, and so we want to name them, because we don’t want to minimize what the struggle was to come here,” said Spahr, “and I’m always one to want to get to the ‘yippee’ part before the real part, which is the struggle.”

In her charge, Spahr told Larges, “I invite you to keep challenging us with your brilliant writing and your brilliant sermons. They are so outstanding because you speak to us from an authenticity that is so deep because you and your family have struggled so to be here.”

Following Spahr’s charge, friends in the liberation movement, Downtown Church in Rochester, New York, members of Larges’s family—including her father, Gene, a ruling elder at Knox Presbyterian Church and a member of the commission to ordain—and members of the Lake Nokomis Church poignantly presented Larges with symbols of ministry, including a handmade Communion set and stoles.

The elder Larges, whose birthday it was, said, “How many elders have the privilege of seeing their daughter ordained on their birthday!”

The Rev. Dr. Jeffrey S. Japinga, transitional executive presbyter for the Presbytery of the Twin Cities Area, was unable to attend the ordination, but commented on the service’s significance.

“The Presbytery of the Twin Cities Area is ordaining Lisa Larges out of her deep giftedness and because of her call to ministry in this particular place,” Japinga said. “We understand Lisa’s history in the church and in the ordination process and are deeply cognizant of it; we share with so many others an acknowledgement of and regret for the deep pain of Lisa’s long journey to this moment. At the same time, we celebrate and are deeply grateful for Lisa’s preparation, her call, and for the opportunity to welcome her among us as a colleague in ministry in this moment and for this time in the Presbyterian Church.”

Japinga recalled the presbytery meeting in September at which Larges was examined and approved for ordination as a teaching elder, noting how inspired everyone was by her.

“We were deeply moved by her statement of faith and how she answered questions from members and commissioners, and we joyously affirmed this action,” he said. “This day is one of great institutional and historical significance, even as it is also a day to point to the future as we welcome Lisa as a teaching elder in the Presbytery of the Twin Cities Area.”

Also present when Larges was examined and affirming her gifts with both the written and the spoken word was the Rev. Beth Hart-Andersen, a teaching elder member of the Presbytery of the Twin Cities Area who attended the ordination. “How sad as a church that we were robbed of this—robbed of Lisa’s intellect and of what she shares in words that are tangible, winsome, and loving,” she said.

Like Japinga, the PC(USA)’s co-moderators, the Rev. Jan Edmiston and the Rev. Denise Anderson, were unable to be present. They instead send video greetings with words of blessing and congratulations for the newly ordained Larges.

The Presbyterian Mission Agency was represented by Ruling Elder Tony De La Rosa, its interim executive director, who not only attended but also sang in the choir.

“Today was a significant day, not only for Lisa and the Lake Nokomis congregation, but also for the Presbytery of the Twin Cities Area and the Presbyterian Church (U.S.A.),” said De La Rosa following the service. “To paraphrase Mardee Rightmyer’s sermon, Lisa’s service of ordination is a prayerful demonstration that the arc of our church’s history is long and it bends toward justice.”

Eternal God, you call us to love our neighbors, to reach out to the least of our brothers and sisters, and we are grateful that you show us ways to serve you. Bless us and challenge us to love as you have loved us, through Christ our Lord. Amen.