We have been deeply impressed by the rich cultural heritage of the Malagasy people and the tremendous natural resources and the great biodiversity of this unique environment where 90% of the plants and animals on the island of Madagascar can be found nowhere else on earth. Sadly, the resources of this nation are at a high risk. Over 70 percent of the population lives below the world poverty line, while a few grow rich through corrupt economic and political dealings. Today, we had the opportunity to meet with two different groups that are working, each in their own way, to preserve the island nation’s resources.

In the morning, we met with the American Ambassador to Madagascar, the Honorable Robert T. Yamate, and key members of his staff. Each member of our groups raised a different question, asking in turn about the embassy’s responses to such issues as the fairness of past elections and the upcoming 2018 national election; the rapacious mining practices and illegal trafficking in precious rosewood or tortoises that destroys the land and resources while leaving little money in the hands of the Malagasy people; the development of renewable energy resources; the burning and clearcutting of forests that threatens the very existence of innumerable endangered species; and the human trafficking and child labor that entraps Malagasy citizens in virtual slavery, either abroad or in the bigger cities of Madagascar, with little hope of returning home. Our conversation was scheduled for one hour, but went well over, as the ambassador and his staff met with us for over 90 minutes. We were impressed by the knowledge and professionalism of the ambassador and his staff, and hope we conveyed the great need for even more international attention to the problems of Madagascar.

In the afternoon, we met with the Life of the Nation Committee, a key committee of the FFKM, the Council of Christian Churches in Madagascar that includes the Catholic, Anglican, Lutheran, and Reformed (FJKM) churches. While the American embassy is in a position to bring external and international pressure to help Madagascar, the FFKM has played a key internal role in Madagascar’s political and economic life in recent years. The FFKM played a key role in resolving the political crisis after the 2009 coup d’état in Madagascar, and is seeking a greater role in Madagascar’s Reconciliation Council (FTM) to ensure the fairness of the 2018 elections, which threaten to be skewed by corruption in favor of the incumbent administration. The FFKM is meeting November 23-26 in Andasibe. 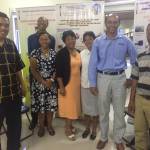 , an impoverished village at the southern tip of Madagascar. With the support of the national church, the congregation had raised funds to build a school, and is on track to complete a church and community building in the near future.

There is much we can do to help the current political and economic situation in Madagascar. We can educate ourselves about the issues, lobby our government to bring international pressure for change, and pray for the FFKM and the FJKM in their work to bring reconciliation and development to the Malagasy people.

A group of ten US Presbyterians is visiting Madagascar November 7 to 17 under the auspices of the Presbyterian Peacemaking Program and Environmental Ministries to learn more about the FJKM’s various ministries of reconciliation and peace-building, as well as its efforts to promote sustainable human development whilst protecting the integrity of creation.

The group includes Rev. Carl Horton, the coordinator of the Peacemaking Program, and Douglas Tilton, the PC(USA)’s Regional Liaison for Southern Africa. In-country leadership is provided by PC(USA) Mission Co-workers Dan and Elizabeth Turk and two representatives of our FJKM hosts: Pastor Lala Rasendrahasina, the immediate past President of the FJKM, and Pastor Lala Nirina Rakotoarisoa, the former head of the FJKM’s Chaplaincy Program.