Support disaster response this hurricane season, GIVE NOW
Make A Donation Click Here >
Home › What We Do › Where We Work › Co-workers

The Turks periodically visit the U.S. and are able to visit congregations as their schedule allows. Email them to extend an invitation to visit your congregation or organization.

About Dan and Elizabeth Turk’s ministry

“We are excited about working with the Church of Jesus Christ in Madagascar (FJKM) in its ministries of healing and hope,” write Dan and Elizabeth Turk.

The Turks serve with the PC(USA)’s partner church, FJKM, as it ministers to the population in the areas of health, environment, agriculture and safe drinking water. FJKM believes that Christian witness should include ministry both to the physical and spiritual needs of God’s people and care for all of God’s creation. Dan and Elizabeth work as advisors to FJKM in the fields of environment and health, respectively.

Dan works with the FJKM’s Fruits, Vegetables, and Environmental Education (FVEE) project. With per capita income less than $250 per year, many Malagasy people have difficulty feeding their families. Due to ongoing deforestation, many of Madagascar’s endemic plants and animals are threatened with extinction. FJKM is responding to these needs by helping people grow fruits and vegetables to improve their nutrition and get out of poverty. The FVEE promotes environmental awareness by planting native trees at FJKM churches, seminaries and primary and secondary schools. Dan helps pastoral students learn to grow fruits and vegetables. The new pastors use these skills to help their communities and families achieve improved food security and nutrition. The FVEE has established a fruit center to help promote fruit growing, especially many of the world’s best varieties of grafted mangos, on a national scale.

Elizabeth’s main focus with the FJKM is in the area of community health and HIV/AIDS, especially in training, program design and implementation. The FJKM’s health professionals at rural dispensaries work to prevent and treat the major illnesses that threaten health: malaria, measles, diarrhea and pneumonia. The dispensaries also provide access to important services like family planning. When funds permit, Elizabeth assists the FJKM’s efforts to help communities gain access to safe drinking water. Elizabeth also serves on the FJKM National AIDS Committee. FJKM trains pastoral students in AIDS prevention and has a youth peer education program designed to help youth live positively according to biblical principles.

Madagascar remains one of the world’s poorest countries. Eighty-five percent of the population lives on less than $2 per day. Located in the Indian Ocean, 250 miles off the southeastern coast of Africa, Madagascar is the world’s fourth-largest island and home to many unique species of mammals, birds and plants. The Malagasy are thought to be the descendants of Africans and Indonesians who settled on the island more than 2,000 years ago. Madagascar suffered a period of crisis following a coup d’état in 2009. Presidential and legislative elections should take place in late 2018. The majority of Malagasy citizens are Christian, a large percentage adheres to traditional beliefs and less than 10 percent are Muslim.

About Dan and Elizabeth Turk

Born in Atlanta, Georgia, Dan graduated from Davidson College in North Carolina with a Bachelor of Science degree in Biology. He earned a Master of Science in Agronomy and Soil science from the University of Hawai‘i at Mānoa and a Ph.D. in forestry from North Carolina State University. His doctoral research focused on the growth rates of more than 60 native Malagasy trees. Dan spent two years as a consultant in agroforestry to the Ranomafana National Park project in Madagascar. He is the author of “A Guide to Trees of Ranomafana National Park.”

Starting out in Anniston, Alabama, Elizabeth graduated with a Bachelor of Science in Psychology from Duke University in Durham, North Carolina. She later earned a Bachelor of Science in Nursing from Indiana Wesleyan University in Marion and a Master’s degree in Public health from the University of North Carolina at Chapel Hill. Elizabeth served as a Presbyterian volunteer in Haiti, Zaire and Madagascar. Before going to Madagascar, she was a health education intern at the Centers for Disease Control in Atlanta and worked as a pediatric nurse in Orlando, Florida.

Watch a video of Dan and Elizabeth Turk 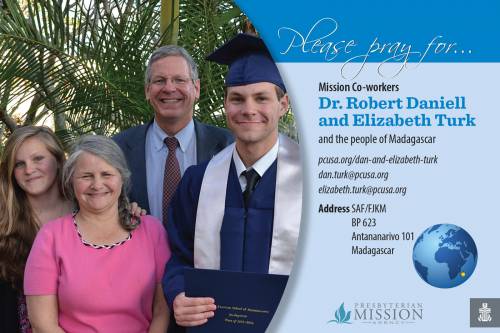 Use this card as you pray for Mission Co-workers Dr. Robert Daniell and Elizabeth Turk. The card includes a photo and overview of their work.…

Give in honor of the ministry of Dan and Elizabeth Turk