Doug periodically returns to the U.S. He is available for speaking engagements as his schedule permits.  Email him to extend an invitation.

Doug Tilton currently serves as regional liaison for Southern Africa, helping to strengthen the mutual ministries of the PC(USA) and its partner churches and institutions in five countries: Lesotho, Madagascar, Mozambique, South Africa and Zimbabwe. Regional liaisons are in regular contact with the PC(USA)’s partners, exploring ways of working together and building the capacity of the global church to bear witness to the good news of Christ’s redeeming love for all humanity.

Doug also provides support for other PC(USA) mission personnel in the region, helps to connect PC(USA) presbyteries and congregations with their counterparts in Southern Africa, and resources Africa mission networks and partners on advocacy concerns.

Regional liaisons can assist these efforts by providing relevant information and analysis, facilitating communications, and troubleshooting problems.” Doug’s experience in public policy advocacy also enables him to serve as a resource to PC(USA)-related mission networks in Africa as they engage advocacy concerns.

Regional liaisons play an increasingly important role in facilitating mission partnerships and helping Presbyterians to identify appropriate ways of working together with partners around the world. “Our church is changing, and so is our approach to mission and partnership,” Doug writes. “One of the most dynamic developments of recent years has been the growth of direct presbytery and congregational links between the United States and other parts of the world. Another important development is the emergence of mission networks to enable those involved in partnerships to exchange experiences and insights and to learn from one another. Regional liaisons can assist these efforts by providing relevant information and analysis, facilitating communications, and troubleshooting problems.”

Serving as a regional liaison has given Doug a deeper appreciation of the importance of ministries of accompaniment. “Wherever I go, I am often surprised and profoundly moved by the ways in which God works through the mutual recognition, affirmation, and encouragement shared among brothers and sisters in faith from different parts of the world,” remarks Doug. “It is humbling to visit a church where people have walked for several hours to welcome you, to share fellowship, and to celebrate together our common humanity and faith.”

Doug was commissioned as a mission worker in 1992. He was initially assigned to work with an ecumenical agency engaged in peacemaking and community development in a semirural area on the tropical upper south coast of KwaZulu-Natal, just south of Durban. From that vantage point he witnessed South Africa’s inspiring transition from minority rule to nonracial democracy. During the country’s first democratic elections in 1994 Doug served as the provincial administration and financial officer for the KwaZulu-Natal Electoral Observer Network, the structure established by church and civil society organizations to provide electoral education and promote a free and fair poll.

For the next 10 years he was seconded to the South African Council of Churches (SACC), working first as a researcher in the Council’s Parliamentary Office in Cape Town and later in the General Secretariat in Johannesburg. From the time of its formation in 1968, the SACC was one of the leading voices calling for democracy, human rights and social justice in a land that was long blighted by institutionalized racial discrimination. After 1994 the SACC sought to help a new society address the social and economic legacies of apartheid, including poverty, inequality and racism.

Doug’s interest in Southern Africa and his involvement in the antiapartheid movement began while he was an undergraduate at Macalester College in St. Paul, Minnesota. He graduated from Macalester with a B.A. in history, political science and economics. He was a Rhodes Scholar at Brasenose College, Oxford, where he received an M.Phil. in politics in 1985 before working for a year as legislative coordinator for the Washington Office on Africa in Washington, D.C. In that position he facilitated the office’s advocacy work on Southern Africa issues, including its support for the Comprehensive Anti-Apartheid Act. Doug returned to England and received a D.Phil. in politics from Wolfson College, Oxford. From 1995 to 1997 he was again based in Washington, D.C., as a PC(USA) mission specialist assigned to do policy analysis and communications for the Washington Office on Africa and the Africa Policy Information Center.

Watch a video of Doug Tilton 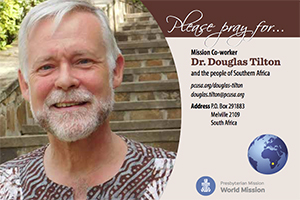 Use this card as you pray for Mission Co-worker Doug Tilton. The card includes a photo of him and an overview of his work. As…

Give in honor of the ministry of Doug Tilton