On this Sunday I was touched by many messages of peacemaking.

We arose once again this morning to the sounds of lemurs 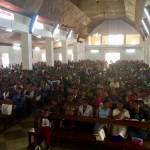 Bringing greetings from the PCUSA to the over 2,000 member Fitsiavana Church in Moramanga

communicating, a wake up call by God’s wonderfully unique creation.  Our group divided into four teams and fanned out across the area to attend the worship services of four congregations:  Andasibe, Moramanga Fitiavana, Moramanga Karmela and Moramanga Analalava.  All of the sanctuaries were filled for the 2+hour worship service, many of them holding 2 or more services on a given Sunday with services beginning as early as 7 am.  The Malagasy hymn singing is joyful, often in 4-part harmony with familiar tunes, but louder than we hear in most Presbyterian congregations.  There are many prayers, scripture readings from the FJKM lectionary, and multiple offerings in each service – sometimes 3-5 offerings – often to support not only the church’s general fund but various programs and mission causes. One of the offerings can even be an auction. Those who can’t give money bring produce, commodities and the works of their hands.  The FJKM has just 4 creeds including the Nicene and Apostles Creed, and usually one is read as a part of the service.  When all of the church services had ended, we gathered with Synod leaders in a restaurant in Moramanga to share our experiences.

The FJKM also has a unique healing ministry run by “Shepherds,” called “mpiandry’ with the m silent.  Those who are called to this ministry go through three years of training. This ministry seemed to be somewhat like Stephens Ministries to me. It has a strong biblical foundation with God as SHEPHERD and the “shepherds” serving the people. They offer encouragement, spiritual, emotional, physical healing and deal with mental health concerns. We were told that they even cast out demons.

We all agreed that the FJKM churches are on fire and growing as they share the gospel. Each church also has several hands-on ministries that address challenges  like extreme poverty, malnutrition, lack of clean water and good health practices, poor sanitation, and environmental degradation.

On our way back to Antananarivo in the afternoon, we stopped at a memorial to at least 89,000 Malagasy people who were massacred on March 29, 1947 when they  sought independence from the French.

A group of ten US Presbyterians is visiting Madagascar November 7 to 17 under the auspices of the Presbyterian Peacemaking Program and Environmental Ministries to learn more about the FJKM’s various ministries of reconciliation and peace-building, as well as its efforts to promote sustainable human development whilst protecting the integrity of creation.

The group includes Rev. Carl Horton, the coordinator of the Peacemaking Program, and Douglas Tilton, the PC(USA)’s Regional Liaison for Southern Africa. In-country leadership is provided by PC(USA) Mission Co-workers Dan and Elizabeth Turk and two representatives of our FJKM hosts: Pastor Lala Rasendrahasina, the immediate past President of the FJKM, and Pastor Lala Nirina Rakotoarisoa, the former head of the FJKM’s Chaplaincy Program.