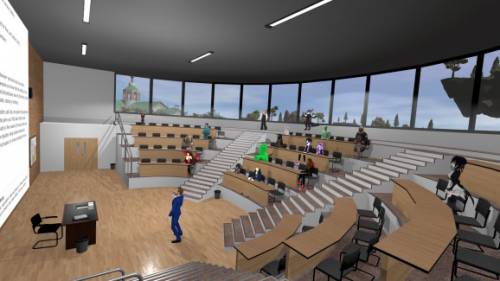 CHVRCH+ is the first virtual church fellowship on a virtual reality platform that will help church leaders advance their ministries in virtual spaces.

LOUISVILLE — The Rev. Dr. Christopher Benek has developed a plan to help expand the Church in virtual reality (VR), which he says “is unparalleled ground for Christian evangelism.” Based in South Florida, Benek serves as the pastor of First Miami Presbyterian Church and is also the founding pastor and CEO of CoCreators. The validated ministry of the Presbytery of Tropical Florida is an emerging tech-based ministry whose motto is “Better People, Better Tech, Better World.”

Benek said that he first considered the potential of ministry in VR while studying at Pittsburgh Theological Seminary. He was part of a cohort in the world’s first Doctorate of Ministry program focused on science and theology. While at seminary, Benek focused his work on emerging technologies, such as artificial intelligence, robotics and transhumanism and how they impact ministry. He came to envision the tremendous ministry potential of VR platforms — and he wanted to find a way to help church leaders advance their ministries in virtual spaces. 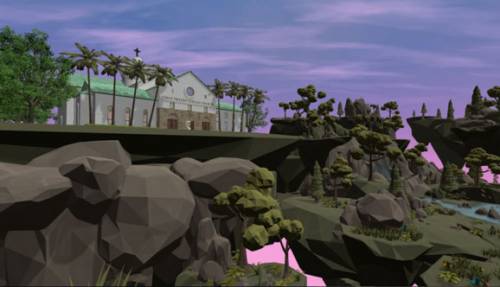 CHVRCH+’s first virtual building is designed after First Miami Presbyterian Church, which is nestled in Biscayne Bay in the heart of South Florida’s Brickell Financial District.

In 2014, when Facebook bought Oculus, a VR gaming startup for $2 billion, Benek knew he was onto something. He began to think about how to implement VR — and the now 2.2 billion people who identify as gamers — into ministry. By 2018, he had applied for and received a 1001 New Worshiping Communities $7,500 Seed Grant — from Mission Program Grants — to fund the equipment and development necessary to try to build a VR church fellowship.

Benek went to work to have a virtual re-creation of a church built in order to have it placed into VR. Once he initiated development, he quickly realized that VR is something like the “Wild West of technological development.” This is because the most popular current virtual programs like VRCHAT have severe limitations.

VRCHAT, for instance, allows participants to create, publish and explore virtual worlds with people from around the world, but users are limited by platform-related issues. For instance, VRCHAT’s server typically only accommodates 40 people at a time. When more people than that join with unoptimized avatars, Benek said, the environment becomes laggy and the system boots people or even crashes. Plus, VR communities currently tend to be anything but wholesome. 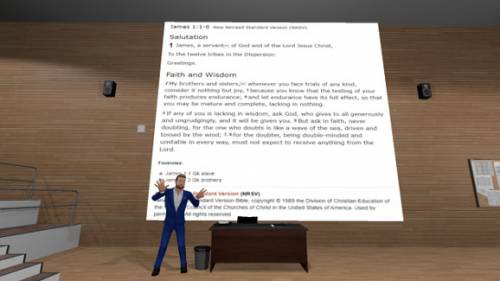 CHVRCH+ Bible studies in VRCHAT meet four times a week, and twice on Sunday — often pushing 40 per class. Developers are currently constructing a virtual stimulation of the biblical city of Ephesus for classes they’ll teach on Ephesians.

“If you don’t know what you’re doing, you can get trolled and even hacked, because the coding is very vulnerable,” he said.

Benek realized that if he was going to build something to emulate a church fellowship in a virtual environment, these platform issues would have to be addressed. So, CoCreators partnered with global developers to create a new VR platform called NOVA. On NOVA, they are building a fully immersive VR MMORPG game called Magnum Opus — whose storyline, Benek said, is based on Christian virtues. The title, which CoCreators hopes to soft launch in November, already has more than 9,000 likes on Facebook.

The development of Magnum Opus allowed CoCreators and their partners to build out the NOVA VR platform, where they can now create the stable virtual environment needed to build virtual churches. Benek said NOVA is an optimized environment that maintains maximum safety and security and can accommodate more than 100 users per instance — which is 2½ times more than an average platform. 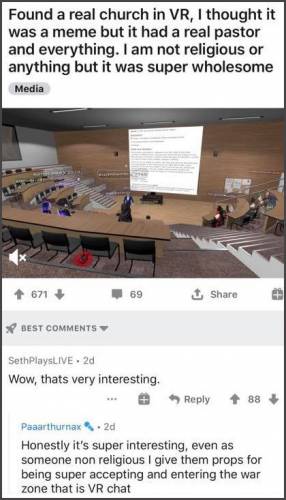 Thanks to the virtual connections made through Bible studies, people are starting to ask the Rev. Dr. Christopher Benek how they can get digitally involved in the physical church he serves.

With the platform issues addressed, the VR developers at CoCreators created their own virtual church fellowship on NOVA named CHVRCH+. The first virtual building is designed after First Miami Presbyterian Church, which is the oldest organized church in Miami.

Now Benek has started doing CHVRCH+ Bible studies in VRCHAT. VRCHAT currently has more than 4 million users. In just over a month, more than 100 people have joined CHVRCH+’s Discord server, representing over 20 countries on five continents.

“One young woman comes from a family of atheists, another has a disability that leaves her homebound without a viable way to get to church,” Benek said. “Yet another person lives in a predominantly Muslim country — and hasn’t found a local church yet.”

As Benek builds virtual relationships with people, he actively invites them to join First Miami’s digital grow groups, and he also brings folks from VR to the local church. He said that in just a month of ministry, people are starting to make donations without any solicitation.

Benek has also started streaming CHVRCH+’s virtual Bible studies on Twitch. The Amazon-owned streaming-service company is geared toward gamers, but it has become so popular that everything from NFL games to the State of the Union address were streamlined on it last year as it accommodates more than 15 million viewers a day.

Benek said streaming is important because it eliminates financial barriers for people to watch and it can provide a sustainable income for ministries. For example, if someone has Amazon Prime, they can go to his Twitch account and link their Amazon Prime account to Twitch.

Once a person does, they can subscribe to his channel for free, as part of their Prime subscription. For every person that does that each month, they get $2.50 to donate to CHVRCH+ at no cost to the user. “It’s a free donation each month, but if they don’t use it, they literally lose it,” Benek said.

“The best part of this is that we built all of this to be scalable,” Benek said. “Initially CHVRCH+ was just meant to be a virtual church fellowship. But it turned into a system to help launch hundreds of virtual new church developments to reach millions of people for Jesus Christ.  With our CHVRCH+ development team, any church can have a virtual reality ministry that is stable, cost-effective and — long term — fiscally sustainable.”

Benek said numerous churches are preparing to have the CoCreators design team build them virtual churches and environments — and coach them through what they need to create sustainable virtual ministries. Given all they’ve done, Benek said it might sound crazy, but none this would have been possible without the support of that initial grant from 1001 New Worshiping Communities.

“At the time I simply didn’t have the finances to fund the technology and development that we would need to build this virtual community,” he said. “Additionally, the ongoing support of the Presbytery of Tropical Florida has been priceless.”

Christopher Benek talks about CHVRCH+ in this video podcast

What Benek believes now, based on his continual learning, is that, from a stewardship standpoint, virtual ministries will be far more cost-effective than physical ministries — and in the long term will likely be a future sustainability model for the global Church.

“While the pandemic has obviously advanced theological discussions about digital ministry significantly, virtual ministries is something still relatively unaddressed,” he said. “This is reason alone for PC(USA) churches to get engaged and consider getting into this space we’ve created.”

Mission Program Grants, which supported CHVRCH+, are made available through the Racial Equity & Women’s Intercultural Ministries of the Presbyterian Mission Agency. The grants support the transforming work of new worshiping communities and mid councils.

In 2012, the 220th General Assembly of the PC(USA) declared a commitment to a churchwide movement resulting in the creation of 1001 worshiping communities over the next 10 years. At a grassroots level, some 600 diverse “1001” communities have formed across the nation.