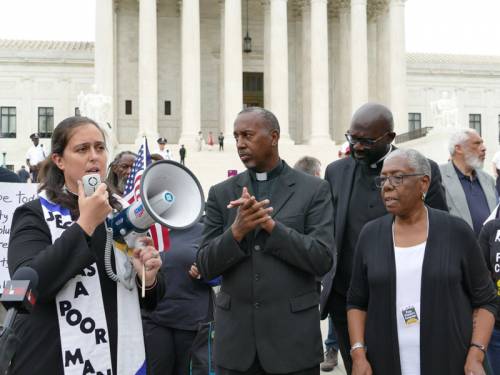 “Voting is Power Unleashed: Moral Monday Mass Assembly,” billed as “a digital assembly and teach-in” will be an online presentation at 7 p.m. Eastern Time on Monday aimed at education and empowerment addressing voter engagement, registration and protection.

Earlier this summer, the Poor People’s Campaign (PPC) released a report showing that while poor and low-income voters make up a substantial portion of the population of eligible voters, their concerns are rarely addressed in political campaigns and debates.

“Our policy positions are in line with the PPC goals,” said the Rev. Jimmie Hawkins, director of the PC(USA) Office of Public Witness (OPW) on Capitol Hill. “Our Matthew 25 goals to eliminate systemic poverty and racism match up. Our presence and participation are of vital importance to bring to fruition the desire to establish the Beloved Kingdom. “

“It has been repeated that ‘this election is the most important in our lifetime,’” Hawkins said. “There is a desire for change in America. People want free elections and an end to voter suppression. This can only come about when people of faith participate in the political process. The PPC is one means to do so.”

The Rev. Dr. J. Herbert Nelson II, Stated Clerk of the General Assembly of the PC(USA), participated in the Poor People’s Campaign’s June 20  Assembly and Moral March on Washington, and Hawkins and other Presbyterian leaders have been active with the campaign at the national and local levels. Poor People’s Campaign co-chair the Rev. Dr. Liz Theoharis is a Presbyterian minister who directs the Kairos Center for Religions, Rights and Social Justice at Union Theological Seminary.

The campaign is billing Monday’s event as the launch of a national organizing effort between now and the Nov. 3 election, the M.O.R.E. (Mobilizing, Organizing, Registering, and Educating) Campaign.

“The Poor People’s Campaign is nonpartisan but deeply political,” a statement on the M.O.R.E. Campaign landing page says. “This fall, we’re demonstrating the power of poor and low-income people to shape the results and mandates of elections. For years we’ve demanded nothing less than a reconstruction of society around the needs of the poor and dispossessed. To make that possible now, we must bring the agenda of the poor front and center in this election cycle and beyond.”

In addition to working with the Poor People’s Campaign, the Office of Public Witness is undertaking its own efforts at raising awareness, participation in and advocacy for voting. In preparation for Christian and Citizen Sunday on Sept. 20, OPW and Presbyterian Mission Engagement and Support assembled a mailing of a letter in English, Spanish, or Korean from Hawkins, a list of resources on voting rights and fighting voter suppression, and a copy of the newly updated pamphlet, Seeking to Be Faithful Together: Guidelines for Presbyterians in Times of Disagreement. The package went to every presbytery and congregation.

Unleashing the power of poor and low-income Americans