The church is responding to the Syria-Turkey earthquake, GIVE NOW!
Make A Donation Click Here >
Home › Poor People’s Campaign hails movement to meet this moment

March went from Washington to online, but leaders feel event’s timing was perfect 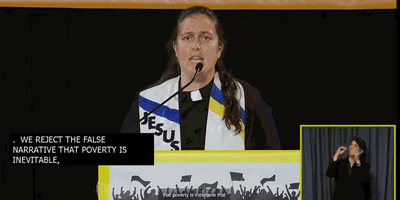 LEXINGTON, Kentucky — Fourteen months ago, the Rev. Dr. Liz Theoharis was on a bus winding through Western Kentucky on the Poor People’s Campaign’s Real National Emergency bus tour and envisioning a major march of tens of thousands of people in June 2020.

No one though, could have imagined what exactly June 2020 would look like then, or even a few months ago. Saturday morning, that March took place with tens of thousands tuning in online for an event that seemed custom made for this moment to Theoharis and to the co-chair of the Poor People’s Campaign, the Rev. Dr. William J Barber II.

She contrasted the event with a campaign rally planned by President Donald Trump in Tulsa, Oklahoma later in the day that has raised concerns from public health officials and others because of the potential spread of the COVID-19 infection in a packed arena of around 19,000 people.

“You have folks that are going to be there without masks, not just endangering their own lives but the lives of so many others in society, when we could have so many thousands and thousands and thousands of people all over the country being able to hear their stories, hear the conditions that they’re coming from, being able to share their voices and stories and faces and tweets and social media posts and be able to come together not just for one event, but for a turning point in this country.”

In his sermon closing the three-hour, 20-minute online gathering, Barber observed, “the COVID crisis has exposed for all to see fissures and wounds of systemic racism and poverty for all to see.”

The Poor People’s Campaign Assembly and Moral March on Washington will be repeated  at 6 p.m. Eastern Time June 20 and 21.

The bulk of the gathering, which drew an initial online viewership of more than 1.1 million on Facebook alone, was devoted to hearing from people impacted by poverty and injustice in the United States — from racial discrimination to mass incarceration to healthcare and educational inequities to police brutality.

“Normal in American got George Floyd, Breonna Taylor, Ahmaud Arbery, and Tony McDade murdered,” a number of speakers said in a montage, referring to the police and police-related killings that have sparked a nearly month-long uprising across the country against police brutality and systemic racism.

Backing up the litany of problems and demands detailed in the program is the Poor People’s Moral Justice Jubilee Policy Platform, which campaign supporters repeatedly asked viewers to send to Congress and other elected officials through its website.

Commissioners to the Presbyterian Church (U.S.A.) 224th General Assembly, which is also being held online due the COVID-19 pandemic, were encouraged to attend the event in which the Rev. Dr. J. Herbert Nelson II, Stated Clerk of the General Assembly of the PC(USA), appeared in a montage. Theoharis is a Presbyterian minister based at Union Theological Seminary in New York City, where she is director of the Kairos Center for Religion, Rights and Social Justice. The campaign also enjoys support from numerous ministries in the Presbyterian Mission Agency.

There were numerous references to the campaign’s roots in the work of the Rev. Dr. Martin Luther King Jr., who launched the campaign shortly before his death in April 1968, including a greeting at the beginning of the program from King’s daughter, Dr. Bernice King.

Barber and Theoharis relaunched the campaign just two years ago with another march on Washington. But as Barber pointed out, rather than stay in Washington, the movement spread across the United States, which was reflected in Saturday’s presentation.

The program originated from Pullen Memorial Baptist Church in Raleigh, North Carolina, though much of the content was recorded for the event or taken from recordings at Poor People’s Campaign events around the country. There were a smattering of familiar faces from faith, politics, and celebrity worlds including former Vice President Al Gore; actors Danny Glover, Wanda Sykes, and Jane Fonda; and Bishop Michael Curry of the Episcopal Church.

But the spotlight was on the campaign’s namesake: people struggling to make ends meet, such as a father from Kansas City talking about how his children get ready for school in the back of a purple minivan while he and his wife prepare for work up front because they don’t make enough at fast food jobs to afford a home.

A West Virginia woman talked about treating a serious medical condition with “essential oils and prayers” after losing medical insurance, parents “launched into the shadows” by the expense of caring for their developmentally disabled child, and a Mississippi man who said he and his siblings were left to fend for themselves after their mother was sent to prison.

He said authorities knew she was a single mother but did nothing to help them.

“The crime perpetrated against my mother and my family was way worse than what they said she did,” he said.

The litany of examples included long-term injustices against Immigrants and Indigenous Americans to current situations including health care workers having to work without personal protective equipment, meat-packing plant workers ordered back to work by a presidential executive order, and prisoners not being treated after contracting COVID-19. 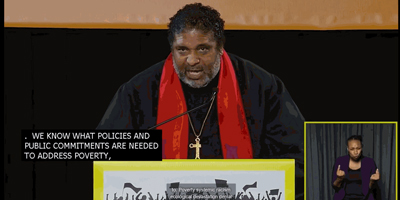 In closing his sermon, Barber used the disease as an analogy, pointing out anyone could contract the disease and soon be gone.

“If you knew you were going to take your last breath in 48 hours, what would you use your last 48 hours to fight for?” Barber asked.

Despite the gloomy picture, Theoharis and others expressed optimism that the campaign would prevail.

Echoing its forefather, she said, “One of my favorite quotes from the Rev. Dr. Martin Luther King (paraphrasing, she noted) is that it would be the height of naivete to sit waiting for those in power to implore us for our demands. We are not naïve. We know that fundamentally transforming this capitalist economy that thrives, that is structured the way that it is to live off of the fruits of other people’s labor and enrich a very few to the poverty of the very many, it’s going to take a broad-scale movement of uniting poor and low-income people across all of these different lines.

“We know that has happened in history before and that it can happen again.”

In the Poor People’s Campaign, she and Barber said they felt they had the movement to meet the moment.