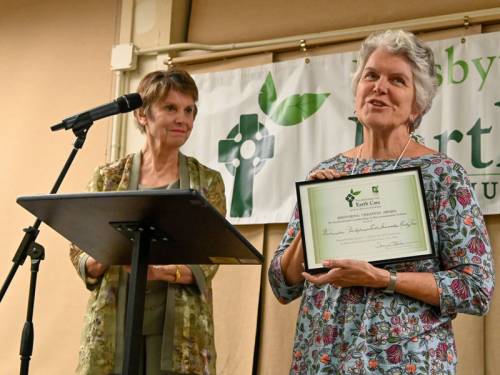 Laurie Leach (right) of the Earth Stewardship Ministry Team at Westminster Presbyterian Church in Dayton, Ohio, accepts the Restoring Creation Award on behalf of the group from from Presbyterians for Earth Care. Rich Copley

STONY POINT, New York — In addition to worship and workshops — and even some hiking, kayaking and gardening — Presbyterians for Earth Care handed out awards at last week’s national conference.

The honorees have been leaders in Earth care at the church level and above, and some were even surprised to find there was an award for what they do.

“It was a breath of fresh air for us,” said Laurie Leach of the Earth Stewardship Ministry Team at Westminster Presbyterian Church in Dayton, Ohio.

The team won the Restoring Creation Award for an organization, and Leach called it “an acknowledgement that we’ve been working on this for a while. It gives us renewed energy.”

Leach said the group was started by youth in the church in 2006, but after they grew up and moved on, members of the congregation who were older took over. Now, she says, the oldest member of the team is 90.

The Earth Stewardship Ministry Team has focused on activities such as selling Fair Trade products, recycling electronics and collecting batteries for recycling. Earth Sunday is always celebrated at Westminster with local flowers, a sermon and presentations. In addition, Advent and Lenten devotionals contain suggestions for Earth care activities during those seasons.

Leach said last week’s Earth Care conference was her first and that it offered “lots of inspiration and ideas” to take back to Dayton. 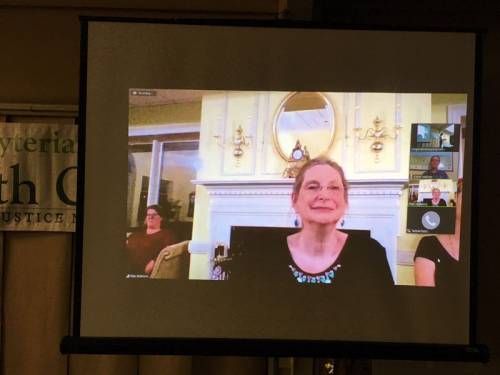 Natalie “Lee” Pippin of Forest Lake Presbyterian Church in Columbia, South Carolina accepted the William Gibson Eco-Justice Award via video call for her leadership at the church and in the community,  including becoming the Presbyterian Hunger Program’s first South Carolina Earth Care Congregation in 2011. In 2015, Forest Lake won the Hunger Program’s Restoring Creation Award for its work.

“Lee has motivated many people to incorporate sustainable lifestyle habits that are healthier for individuals and for the environment,” a Presbyterians for Earth Care news release said. “She has also been a motivator for congregations — both Christian and Jewish — to incorporate a focus on the environment into their programs.” 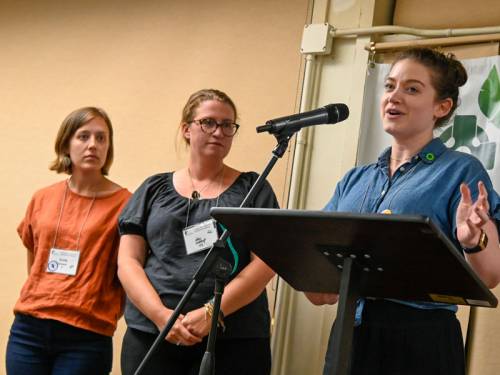 Bair is already known to PC(USA) environmental activists for activities such as joining Fossil Free PC(USA)’s march from Louisville to St. Louis before the 223rd General Assembly to call for divestment from fossil fuel companies and for joining protests against the Dakota Access Pipeline at Standing Rock.

Brewer cited Bair as part of a group of strong young leaders within the church.

“We need to be in this together,” Bair said to the group. “I am very excited accepting this award as your sign that you are really committed to standing together, to rising together to find climate solutions.”

Presbyterians get their hands dirty at Earth Care conference

Earth Care conference looks for hope in painting and Job

What’s the hot car to drive to the Earth Care conference? It’s electric

Presbyterians for Earth Care keynote: ‘How is God feeling now?’

A river flows through Presbyterians for Earth Care conference opening