Time for reflection during the conference’s third day 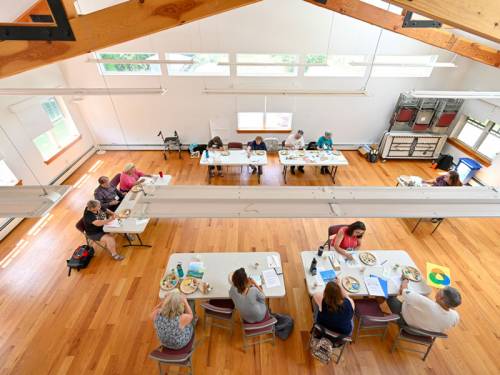 “Prayerful Painting” was one of the creative options offered Thursday afternoon at the Presbyterians for Earth Care conference being held at the Stony Point Center. (Photo by Rich Copley)

“It was fun,” she said after putting the final green and blue touches on her landscape painting. “We’ve been learning so much, it was nice just to come in and create and be free.”

Grace Shockman of Madison, Wisconsin, observed, “It helped me reflect on nature as a prayer and bring that into artwork.” 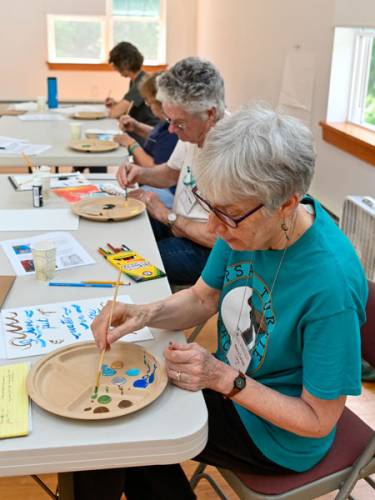 The session the women were participating in was indeed called “Prayerful Painting.” Facilitated by Jessica Maudlin of the Presbyterian Hunger Program, the session was designed to let participants channel their contemplation of creation into paints and canvas.

The artistic endeavor was one of several ways the third day of the 2019 Presbyterians for Earth Care National Conference diverted from its script of the previous two days. Participants were also treated to a concert from conference music leader Warren B. Cooper, an evening song circle, and time of reflection that was nothing like the NPR music show it shares a name with.

But, like Wednesday, the day started with a keynote address from the Rev. Dr. William P. Brown, who aimed to take the proceedings in a more hopeful direction than the previous day of lament with an unusual subject for that task: Job.

“Follow the river, that is our theme of hope,” Brown said, reviving images conference participants’ first heard Tuesday night. “This is a call for coalition building, to reach out to other groups and find common cause.

“That leads to the story of Job.”

Brown, Marcellus McPheeters Professor of Old Testament at Columbia Theological Seminary, allowed that his views on Job have changed over the years. 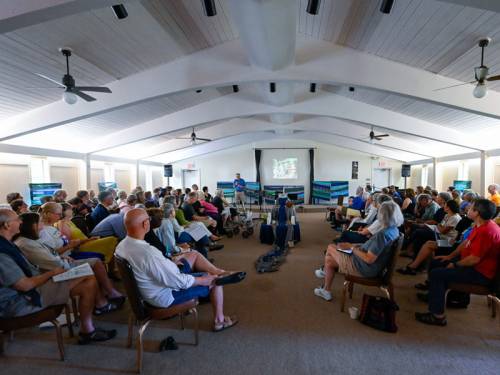 The Rev. Dr. William P. Brown led the morning keynote talk on the story of Job. (Photo by Rich Copley)

The well-known story of Job is that he was a man of tremendous wealth, power, and righteousness until God removed protection from him when Satan said that without his good fortune, Job would curse God. Job famously went from the pinnacle of society to the depths of despair, losing his family, health, and position. He also found he had lousy friends who told him his plight must have been because of something he did.

“Job longs for the day when he was king of the hill, and everybody waited upon him,” Brown said. “My friends, I have a new image of Job. He is a patriarchal supremacist. That’s not to say that Job deserves the suffering he has received.

“But I came to tell you that Job comes out of this painful grueling process of transformation into something new.”

Brown said God made it clear to Job he was never the king of all creation he fancied himself to be, that in creation, there were greater kings such as the lion and Leviathan. Like in his previous talk, Brown took participants through an eye-popping slide show, this time of sea creatures, complete with a dramatic reading.

“He is changed, he is transformed,” Brown said of Job after his journey through creation with God. “He is not the patriarchal supremist he was. He was brought back home to be a different kind of father.”

Later in the afternoon, many conference participants engaged in a another painful story: the 500-year history of people who were indigenous to North America in the KAIROS Blanket Exercise program. After hearing it described as a participatory history lesson, participants took in the history of indigenous people freely moving about America just over 500 years ago before settlers from Europe came, feeling they had the right to take the land due to the Doctrine of Discovery. 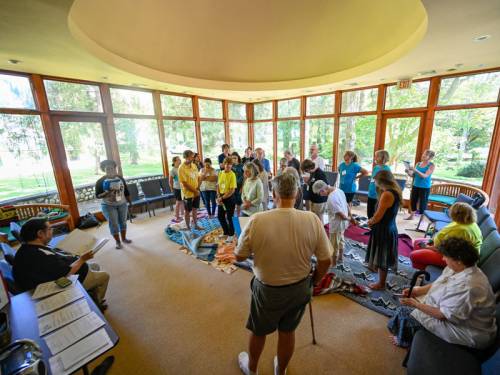 As the Blanket Exercise progresses, the story of European settlers takin gland from and killing indigenous people is told, and the blanket area becomes smaller and smaller. (Photo by Rich Copley)

Participants initially spread out across the floor of Stony Point Center’s meditation room, which was covered with blankets. As the history unfolded, read by four narrators, blankets were folded up, the group’s space was reduced, and members of the group were removed as tales of disease and massacre were told until only one person remained.

Following the lesson, the Rev. Irvin Porter of the PC(USA) Racial Equity & Women’s Intercultural Ministries talked to the group about what they experienced as they expressed a range of emotions including shock, deep sorrow, disappointment and anger. A number of people related the treatment of people who are indigenous to North America to the current plight of refugees at the U.S. Southern border and said they were frustrated and angry with the government and, in some cases, the church. 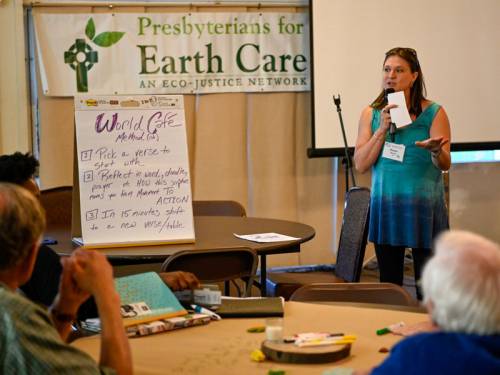 The exercise was one of many things conference participants had to process from their three days at Stony Point. Thursday night, facilitator Phoebe Morad, executive director of Lutherans Restoring Creation, led a World Café format discussion of the conference wherein participants gathered around tables and used Bible verses as prompts for discussion – John 15:5, I Corinthians 12:12, and Psalm 119:105. At 15-minute intervals, people changed tables and while they talked, they were able to write and draw on large pieces of paper to fuel discussion.

Participants emerged with thoughts about the interconnectedness of God, people and the Earth and the need to work to sustain the Earth and persevere over setbacks.

“Make sure this does not stay here,” Morad said. “What you felt here, there are ways you can duplicate that at home.”