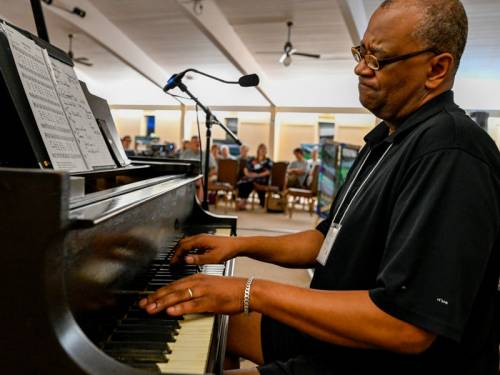 On Wednesday, Warren B. Cooper provided a second great day of worship music during the Presbyterians for Earth Care conference being held at Stony Point Center. (Photo by Rich Copley)

STONY POINT, New York – It’s a tough time to care for the Earth.

The cumulative effect of rising temperatures, loss of land, vanishing species, increased severe weather, and their effect on people is a bit much to take for those who do care deeply for the planet and are keenly aware of what is happening to it.

So Wednesday, at Stony Point Center, Presbyterians for Earth Care took a day of their national conference to lament.

“In lament we come,” said the Rev. Dr. William P. Brown of Columbia Theological Seminary, launching Wednesday’s keynote address. “In lament, we express our grief, our anger, our fear, along with hope, looking towards joy.”

Brown’s talk was preceded by a reading of Ezekiel 37:1-14, which presents a valley of dry bones and a message of hope for Israel. Brown turned his attention to Psalm 104, a celebration of God’s creation, in which he found some quirks, like that even the leviathan is celebrated, where the sea monster is usually portrayed as scary.

He also noted the seemingly perfunctory conclusion: “May sinners cease from earth and the wicked be no more.”

Brown paraphrased, “By the way, God, if you want to make this creation perfect, wipe out the wicked. Please.” 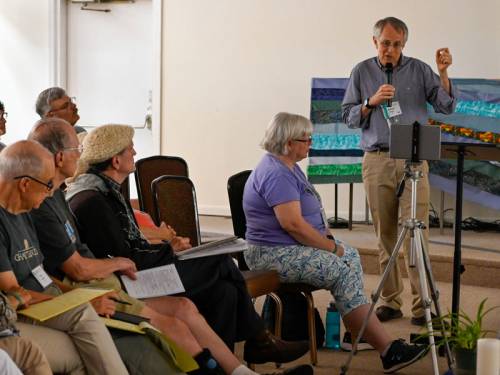 Any creation story has an element of chaos, Brown pointed out. But in the psalm, usual agents of chaos such as the leviathan or lions are celebrated as parts of creation. It is the people, Brown said, that are the agents of chaos in that final verse.

“This verse does cause me to look at myself in the mirror and ask myself, ‘Am I a purveyor of chaos, or do I embody an agency that looks towards the healing for creation?” Brown said. “That’s how I make peace with this last verse.”

Brown went on to present a slideshow, “Fanfare for the extinct creature,” set to Aaron Copland’s “Fanfare for the Common Man.” Conference participants occasionally gasped as images of now extinct creatures such as the western black rhinoceros, ivy billed woodpecker, and golden toad appeared. The final slide raised the question of whether the elephant, polar bear, and other species would be extinct by 2050.

“Every species is a universe unto itself,” Brown said. “With each extinction, a universe passes away.

“If God’s joy is in the diversity of life, how is God feeling now?”

Going into the day, punctuated by thunderstorms in Southeastern New York, conference participants looked at ways creation is being challenged. Musician Warren B. Cooper helped set the mood for the day with selections including the spiritual “Wade in the Water.” 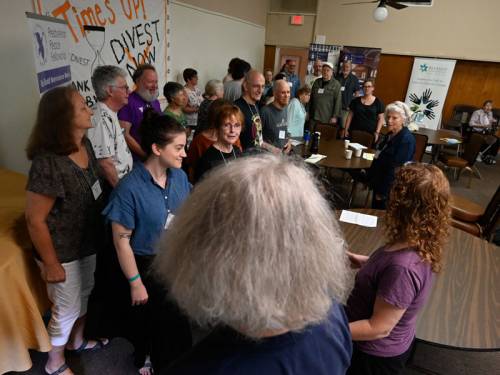 An exercise in a workshop presented by the Presbyterian Peace Fellowship and Fossil Free PCUSA demonstrated how populations become isolated as land and resources disappear. (Photo by Rich Copley)

A workshop on conflict and climate change led by the Rev. Emily Brewer, executive director of the Presbyterian Peace Fellowship, and the Rev. abby mohaupt, moderator of Fossil Free PC(USA) who expresses her name using lower-case letters, started  with an exercise where a line formed by a few people pushed the larger group into smaller and smaller spaces to demonstrate how the impact of climate change and consumption by people in power puts a tightening squeeze on vulnerable populations.

“It is time to organize, and it is time to push back, with love and joy and hope,” mohaupt said.

Brewer pointed out, “Climate is not the sole factor in most global conflicts, but we could be moving that way,” noting issues such as water rights have been part of conflicts in places such as Israel and Palestine. 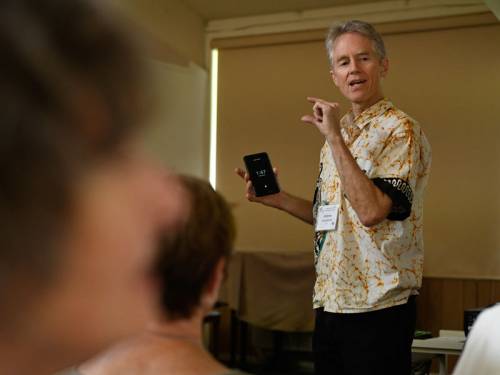 An after-lunch talk by Andrew Kang Bartlett of the Presbyterian Hunger Program (PHP) focused on movement building, starting with showing how people in wealthy Western countries are often blind to challenges facing the rest of the world. Bartlett’s inspirational presentation looked at how people could open themselves up through humbling themselves before God, nature and Mother Earth; building a relationship with nature based on listening and learning; and developing earth consciousness and Christ consciousness.

Later in the afternoon, PHP’s Jessica Maudlin led a discussion about “Embracing God’s Economy” based on the 2018 resource “Considering Our Treasure.”

In the session, group discussions focused on topics such as “what is the impact of what you consume?”  “materialism vs. stewardship” and the benefits of living in a more spiritually-focused economy.

Wednesday night’s plenary session was presented by Dr. Susan Clayton, Whitmore-Williams Professor of Psychology at the College of Wooster in Ohio, via a conference call.  Introducing the topic of the effects of climate change on human health, she said people often think of global warming as “something that affects polar bears, but not us.”

The conversation touched on the impact of climate change on physical and mental health as well as social relationships that were obvious and unexpected, like that poison ivy may become more toxic.

While the day was bookended with dark news, both Clayton and Brown offered hope.

Brown offered his daughter, Ella, who through international travel and study abroad has become a champion for endangered species, particularly the slow loris. Through that, she has become part of a community working to fight back the ravages of climate change.

Brown smiled and said, “This gives a little more joy to God.”