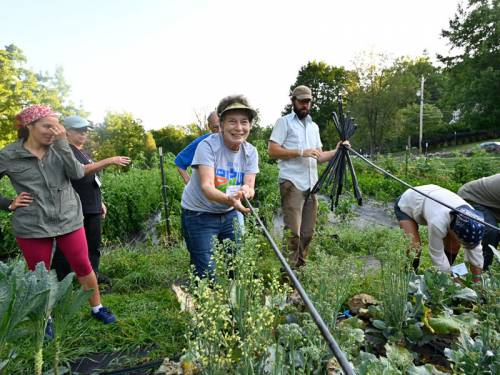 On Friday morning both men were simply volunteers in the Cornerstone Garden at the Stony Point Center, putting in an hour of work before the final day of the 2019 Presbyterians for Earth Care national conference. They were two of seven attendees who took advantage of the fact that the event was being held at a conference center that doubles as a working farm.

What better way to start the day at an Earth Care conference?

“We’re going to harvest some kale and get some irrigation line pulled up, because it’s near the end of the season,” staff farmer Will Summers said to his crew that rolled out at 7 a.m. to help.

First up was kale. Volunteers pulled the broad, rubbery leaves from the abundant plants growing in well-defined rows. The sun was just breaking over the trees as Lynn Morneweck-Fuld of West Side Presbyterian Church in Ridgewood, New Jersey, bobbed up and down picking kale and depositing it in a big blue bucket. 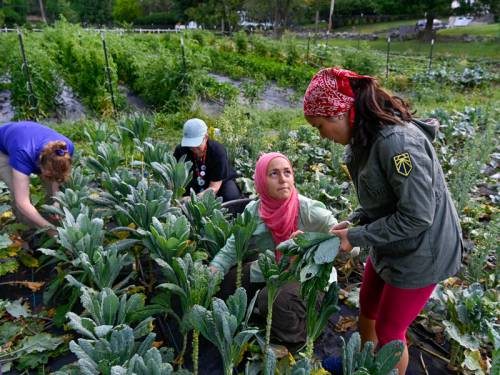 “It’s tied real closely to what we’re doing here, which is caring for the Earth,” she said. “Plus, now we know where all the cucumbers come from.”

A lot of what is picked in the garden goes to the Stony Point kitchen, making the venue a true farm-to-table experience. A majority of the menu is plant-based, most of it drawn from the gardens around the property which produce peppers, tomatoes, broccoli, okra (if you are into that), and more.

“A lot of people talk about sustainable farming,” Summers said. “We can show them what it’s like.”

Stony Point visitors can go deeper than an hour to start the day with farming as the center offers retreats and longer farming intensives. 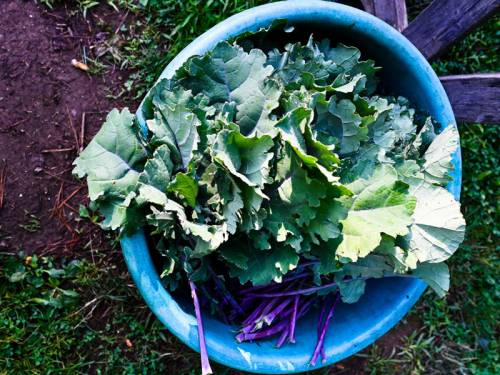 The Earth care crew brought varying levels of experience, from Brenda Thomas, who said she would be out in the garden at her home church in Dunedin, Florida, at that hour, if she was back home, to folks who didn’t have much opportunity to farm where they lived. Daniela Ochoa Gonzalez of Washington, D.C., came out all three mornings to farm.

The staff farmers are, of course, out in the gardens daily. But Friday morning demonstrated what seven extra sets of hands could contribute. At one point, after clearing the better part of a row of kale, most of the participants were in a line, pulling in irrigation lines like they were trying to reel in a big fish.

“This is quite an accomplishment,” Summers said to the crew, which had pulled out most of the irrigation lines in one section.

Morneweck-Fuld said, “It was nice to do some good, honest work to start the day.”