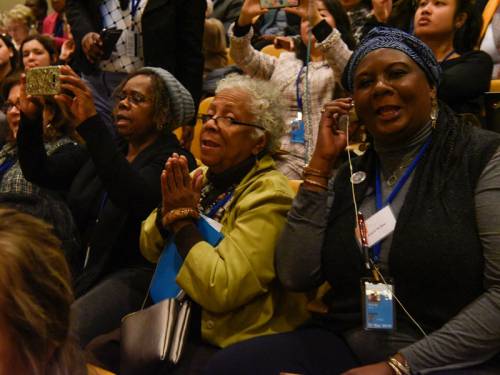 Pam Snyder, Sherry Brown, Alpha Brown, and Jewel McCrae join a singalong of “We Shall Overcome” before a town hall meeting with UN Secretary-General António Guterres at the 63rd UN Commission on the Status of Women. (Photo by Rich Copley)

NEW YORK — Their amazement at the Secretary-General of the United Nations’ openness to questions from the crowd was second only to their amazement that they got in.

A handful of members of the Presbyterian delegation to the 63rd Commission on the Status of Women (CSW) stood in the massive line just before noon Tuesday hoping to snag tickets to the forum in the conference room that had a stated capacity of 768. While it looked like a lot more people than that in the line that went from the UN General Assembly Building foyer back into the facility, more than a half-dozen Presbyterian delegates obtained tickets to the event where literally anyone had a chance — chance being the key word — to ask Secretary-General António Guterres a question.

“I just feel like it is a real privilege to actually be here, and you can — anybody can — ask a question,” said Pam Snyder, a delegate from Staunton, Virginia. 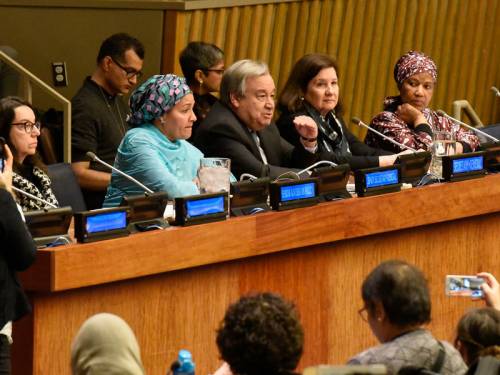 UN Secretary-General António Guterres speaks at a town hall meeting during the 63rd UN Commission on the Status of Women. (Photo by Rich Copley)

For more than an hour, Guterres sat at the microphone, initially offering statements, including saying that at senior levels of the world body under his control the staff was near gender parity, with 53 percent men and 47 percent women, on track to a commitment of achieving parity by 2021.

He also noted a rising tide of opposition to women’s rights worldwide, airing concerns about reversing some advances, particularly with issues such as violence against women.

“We need to push back against the pushback in relation to what is a difficult environment for the human rights universe related to the question of gender,” Guterres said. 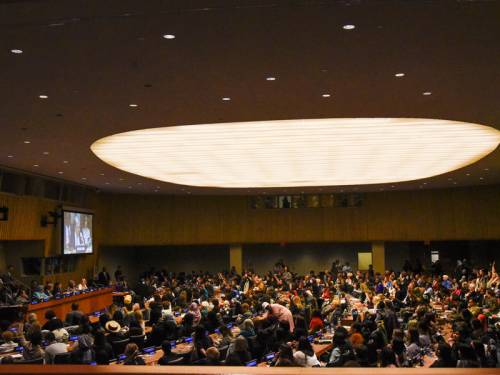 It was a full house for a town hall with UN Secretary-General António Guterres on March 12 at the 63rd UN Commission on the Status of Women. (Photo by Rich Copley)

Turning to the audience, he took a variety of questions from representatives from around the world on topics including LGBT rights, human trafficking and organ trafficking, international DNA registries, political oppression, and even difficulties obtaining visas to come to events such as the UN Commission on the Status of Women.

“This was my first opportunity to sit in on a town hall meeting and it was wonderful, just to hear from the different states what the concerns were and then to be updated on what they were doing,” said Jewel McRae, Associate for Women’s Leadership Development and Young Women’s Ministries for PC(USA)’s Racial Equity & Women’s Intercultural Ministries.

Julianne Nice, a Presbyterian delegate from New Orleans, said, “I was not expecting the Secretary-General to be so open. It was good he took questions, and he paid attention in a way that I did not expect.”

Guterres took three rounds of four or five questions each from the audience. He usually addressed questioners by name and in some cases said he would bring up the questioner’s concern to that nation’s leader the next time he talked to them. 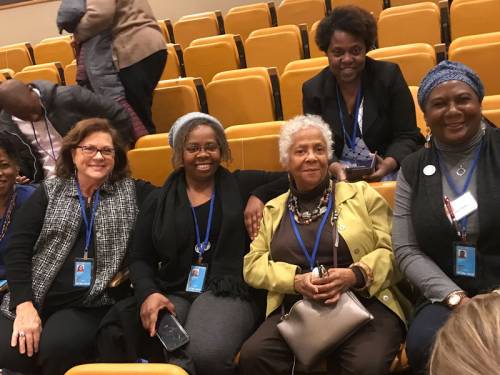 Cheryl Pennington, Pam Snyder, Sherry Roberts, Alpha Brown and Jewel McRae, Presbyterian delegates to the 63rd UN Commission on the Status of Women, wait for the start of a town hall with UN Secretary-General António Guterres. (Photo by Rich Copley)

“He answered the questions that were asked with clear answers, no distractions, and when he didn’t know the answers, he admitted it and said he would research it,” said Cheryl Pennington, a delegate from Oklahoma City. “Even if there aren’t answers, even if the answers are not given, just being able to hear the questions from different countries is empowering.”

She pointed to questions regarding nations such as Bangladesh and Madagascar, which aren’t necessarily on the daily news cycle, as being particularly informative.

Click here to give to the Presbyterian Ministry at the United Nations.

Snyder has been coming to CSW for more than a decade and has been to other Secretary-General town halls.

“I was here when he made the commitment to parity at the United Nations,” Snyder said. “And, of course, you hear and wonder if it’s really going to happen. What I see is action. He is making it happen and standing by the commitments he made initially.

“I think just that he takes this much time to come and talk with this group, and the fact that he is making a difference … that, to me, is really very encouraging.”

The town hall took place in the context of a commission where attendees were hearing discouraging to horrifying stories about the state of women and women’s rights in the world. Even Guterres acknowledged some regression in the global status of women, and active opposition to advances in women’s rights.

“I’m glad he’s making progress, but he still has a long ways to go,” delegate Alpha Brown of New York City said. “A lot of things have to be addressed.”

Read more about Presbyterians at the 63rd Commission on the Status of Women: