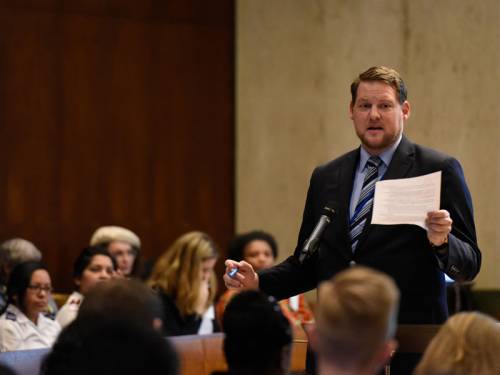 Ryan Smith speaks during the Ecumenical Women at the United Nations orientation March 9 at the UN Church Center. (Photo by Rich Copley)

NEW YORK – The annual United Nations Commission on the Status of Women is an all-hands-on-deck and then some event for the Presbyterian Ministry at the United Nations.

Over the weekend, the small staff of the Presbyterian Ministry at the United Nations (PMUN) consisting of Ryan Smith, director of the ministry; Sue Rheem, mission specialist for international advocacy; and Carson Smith, Young Adult Volunteer, welcomed nearly 30 delegates and staff from across the country for the two-week Commission defining the world body’s priorities for women.

Smith describes the Commission as the “gender-norm setting meeting for the world for the year.”

It is the largest event the PMUN hosts each year.  After attending both a Presbyterian specific orientation Friday night and joint orientation with Ecumenical Women at the United Nations Saturday, the delegation set off to make its first official visits to the UN grounds across First Avenue from the PMUN office at the Church Center at the UN.

“What I love about the commission is it is an opportunity for Presbyterians, especially, to actually get to interact with the UN, to be on the UN grounds to be in the official meetings of the UN,” says Smith. “It’s not just hearing about us doing it. It’s actually getting to do it themselves. It is the relationship of the PC(USA) and the UN that allows us to facilitate that.” 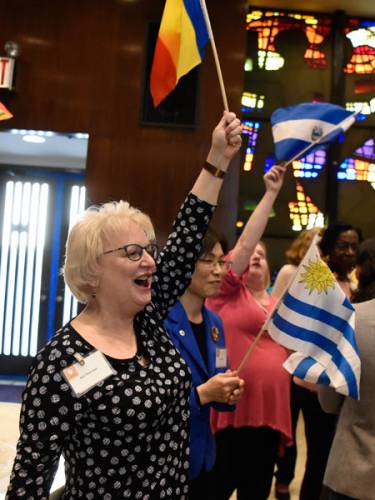 Joy Durrant, vice-moderator for justice and peace concerns with Presbyterian Women, joins in worship during the Ecumenical Women at the United Nations orientation March 9 at the UN Church Center. (Photo by Rich Copley)

The stage has been set by both the UN Economic and Social Council and the church, the latter through a joint statement submitted by the Presbyterian Church (U.S.A.) and Presbyterian Women, who are celebrating their first commission as an accredited non-governmental organization (NGO).

The commission has stated priorities of social protection systems, access to public services, and sustainable infrastructure for gender equality and the empowerment of women and girls for this year’s edition, its 63rd.

The joint Presbyterian statement highlights the importance of social protections for the LGBTQI community, particularly trans women, and focuses on anti-racism, “recognizing the sin of racism and asking governments to be working against it in the gender justice system,” Smith says.

(Here’s where you can read the full statement.)

“It’s the governments who do the negotiating, not us,” he says.

“When we bring in the delegates, what we hope is the delegates can highlight our priorities everywhere they are. So, if they’re in a room with a minister from Germany, or they’re in the room with a civil-society person from Kenya, what we hope is that we’re able to bring what we believe to be most important to the top. So, the delegates that we bring in represent the concerns of the church in all the settings that they will participate in.” That could be anything from meetings on the UN grounds to private scheduled meetings to cornering an official in an elevator.

It also gives the visitors a glimpse what the ministry does all year long, taking the church’s priorities into meetings and other interactions with nations that are hashing out their priorities. 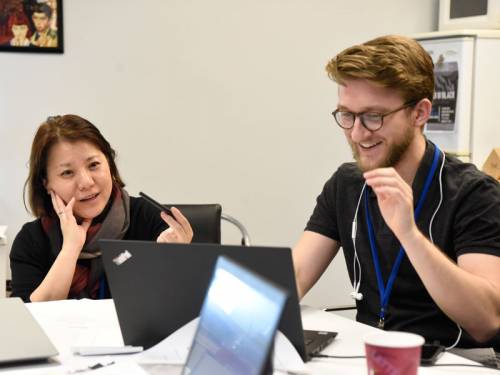 And that is what the PMUN staff are doing on a daily basis, advocating for the PC(USA) position on issues that come before the UN.  Smith says there are three questions that guide the ministry in deciding whether to speak out on an issue:

“When all three of those come together, that’s when our office prioritizes the work,” he said.

And Smith says hearing from Presbyterians is important.

“Presbyterians should know they have a connection to the UN,” Smith says. “If there’s something that’s going on, if they care about something in the world, Presbyterians have an opportunity through a local congregation or through their mid-council to write General Assembly policy that asks the church to work on or highlight specific issues. It also gives us the opportunity to work on it within the UN community.

“We’re also a connecting piece for Presbyterians, so if a Presbyterian is really interested in a certain country or a certain topic, we can help link them to the resources available through the UN system.”

And opportunities to connect directly with the UN, like the Commission on the Status of Women are there. Last month, PMUN hosted a robust delegation to the UN Commission on Social Development addressing inequalities and challenges to social inclusion.

Smith says with the new partnership with Presbyterian Women, the church can bring larger delegations to the Commission on the Status of Women. “Right now,” he said, “we’re looking at the other UN commissions and the priorities set by PC(USA)’s General Assembly to say, ‘Where are folks who are passionate and experts on this in the church, and where can we find places within the UN structure where we can bring those folks in?’”