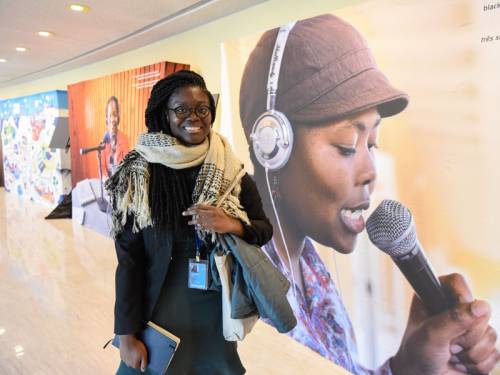 Nana Boateng poses with a display about a UN radio project. She is pursuing a career in audio media. (Photo by Rich Copley)

NEW YORK — Nana Boateng and Joy Durrant stepped into the massive foyer of the United Nations building Monday morning and were a little lost.

The destination was Conference Room 11, but how to get there? What did they need to get in? A helpful security officer told them where the room was, and that they might need special passes for the conference they wanted to attend in the opening hours of the 63rd Annual Commission on the Status of Women (CSW).

At the ticket counter, they were politely told in several accents that they did not need tickets to the mid-morning panel on “The Council of Europe Istanbul Convention: A Global Instrument for Preventing and Combating Violence Against Women and Girls.” 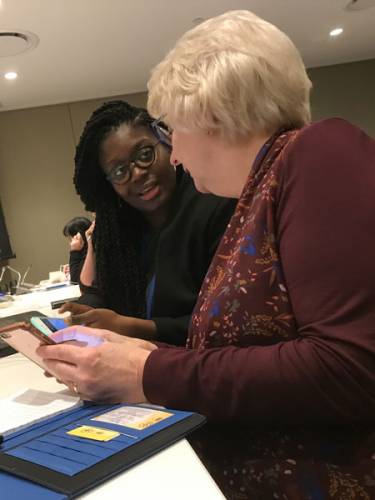 Nona Boateng and Joy Durrant talk before a panel on violence against women. (Photo by Rich Copley)

So, off the duo from the Presbyterian delegation to the CSW went, squeezing into the conference room until they wound up at front row seats where they were just a few chairs away from officials such as Asa Regnér, the acting Assistant Secretary-General and Deputy Executive Director of UN Women. In front of them were microphones they could use if they wanted to ask a question.

“I’m overwhelmed in a good way,” said Boateng, 23, who graduated from Berea College in Kentucky last year and is now based in San Francisco working with 826 Valencia, a not-for-profit organization helping under-resourced students with their writing skills. “I never expected to be here. Every once in a while, my eyes well up. It’s so empowering.”

Boateng is one of numerous Presbyterians, and part of a group of young PC(USA) women, attending the annual Commission for the first time.

“We look for young women who would gain from the experience and represent the PC(USA) well,” Beth Olker, field staff for the church’s Racial Equity & Women’s Intercultural Ministries, said of inviting Boateng to be a delegate. “She’s exactly who we want to see coming to this.” 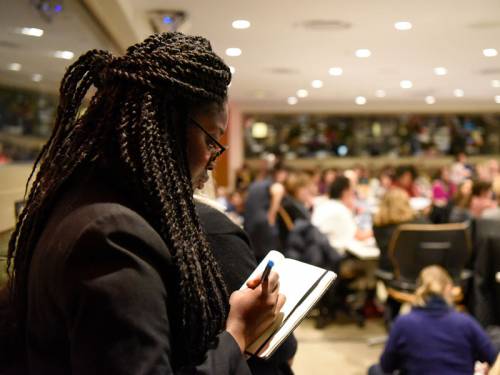 Nana Boateng takes notes during a panel on women in media at the 63rd UN Commission on the Status of Women. (Photo by Rich Copley)

Getting young women to events like the CSW and next month’s Compassion, Peace & Justice Training Day and Ecumenical Advocacy Days in Washington, D.C. is important to helping young adults establish themselves as leaders in the church and maintain a connection to the church at a time in life when a lot of people fall away, or at least take a break.

Click here to give to the Presbyterian Ministry at the United Nations.

“Being in that church informed how I understood religion and Presbyterian communities,” Boateng said. “Now, people in the church are standing up for issues, and that’s really important to me.”

Olker said it was apparent that issues important to the CSW were important to Boateng by her biography. At Berea, the self-described “radio baby” began working in radio and podcasting, buying a professional voice recorder and beginning to put together episodes about issues in the African diasporic community at the Eastern Kentucky college. She also worked in campus radio, producing and hosting several shows around public affairs.

Boateng parlayed that experience into an internship with NPR’s “Code Switch,” an influential podcast about race and identity.

“I want to do something where I’m helping people with storytelling,” she says. “Sound is a really beautiful tool you can use to covey emotion and stories. It’s very accessible. “

And that is what Boateng is doing in San Francisco with 826 Valencia, where in addition to helping students write, she is having them read their writings and develop them into podcasts, even doing their own audio editing. So an obvious destination after her first commission meeting was a panel discussion on women in media, featuring guests such as Edith Lederer, a pioneering war correspondent during the Vietnam War and UN reporter for the Associated Press, and Raquel Willis, the first trans woman to be named executive editor of “Out” magazine. 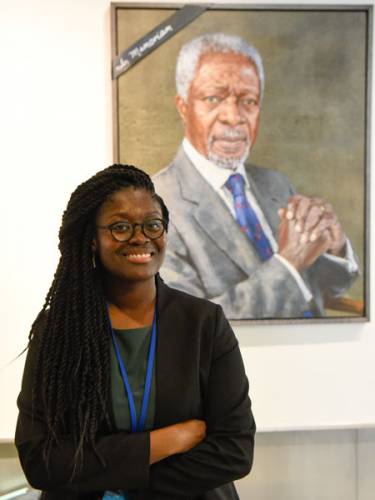 Boateng said she appreciated the intergenerational discussion and the broader look at media representations of women in the panel. Heading to lunch after the two sessions, she took interest in a display about a UN radio project as well as a portrait of former UN Secretary General Kofi Annan who, like her family, hailed from Ghana.

Going into her week at the Commission on the Status of Women, Boateng is interested in connecting with issues in Ghana and officials from the nation, if possible.

She will definitely be in governmental meetings, selected by the Presbyterian Ministry at the United Nations (PMUN) to represent the PC(USA) in those discussions along with fellow young delegate Madison McKinney.

Ryan Smith, Director of PMUN and Representative to the United Nations for the Presbyterian Church (U.S.A.), says Boateng’s “application to the PC(USA) delegation talked about her belief in the power of sharing stories. She talked of ‘everyday people vocalizing the issues their communities face in order to challenge and raise the way people engage with socio-economic disparities…’ Nana exemplifies what the Presbyterian Ministry at the UN does day in and day out at the UN, sharing stories of our sisters and brothers around the world with decision makers.

“Nana’s enthusiasm for global change is an inspiration to us.”

And there is no doubt the kind of change the 23-year-old wants to see.

Reflecting on the stories she heard of power imbalances and their devastating effects on the lives of women in just a half-day, Boateng observed, “If there were more female representatives in media and in power, we could hold governments and officials accountable.”

Read more about Presbyterians at the 63rd Commission on the Status of Women: