Share God’s love with our neighbors-in-need around the world through One Great Hour of Sharing.
Make A Donation Click Here >
Home › Making a blanket statement

Moving exercise condenses half a millennium into 50 minutes 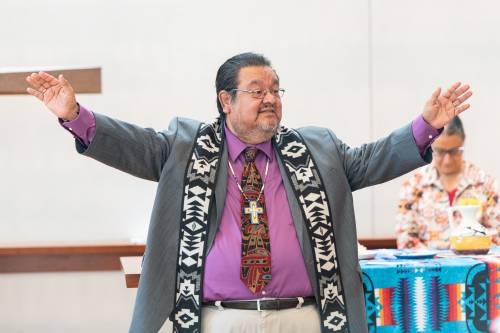 The Rev. Irvin Porter delivers the benediction at a chapel service held on Native American Day (September 12, 2018) at the Presbyterian Center in Louisville. (Photo by Gregg Brekke)

LOUISVILLE — One day last week the Rev. Irvin Porter invited about four dozen staff working at the Presbyterian Center to stand on the blanket of their choosing among about 20 covering a conference room floor.

As he and three others read from a script created by the group Roots of Injustice, Seeds of Change: Toward Right Relationship with Native Peoples — which outlined the cruel effects the Doctrine of Discovery had on Native Americans — an assistant periodically rolled up corners and edges of the blankets until there was scant room for participants to stand.

As the blanket exercise played out, crowd members — playing the part of the up to 30 million Native Americans present in what Europeans called the New World when Christopher Columbus landed on Caribbean islands more than five centuries ago — took a seat as disease, warfare, broken treaties, forced migration and mandatory boarding school took their toll. In the end, a half-dozen people remained standing on the gathered-up blankets.

“If you’ve never heard this before, you’re not alone. This is the kind of history nobody cares about,” said Porter, associate for Native American Congregational Support for the Presbyterian Church (U.S.A.). The mission, he said, is to “wake us up that this happened. We as a denomination are trying to blunt this racism.”

Porter, an enrolled member of the Pima Tribe who’s also descended from the Nez Perce and T’hono O’odham tribes, is also part-time pastor of Church of the Indian Fellowship in Tacoma, Wash. He noted that in 2016, the 222nd General Assembly repudiated the Doctrine of Discovery, a Columbus-era papal policy that sought to justify the seizure of land and the murder and enslavement of any of its occupants who weren’t Christian.

While Columbus wrote that with 50 men, “we could subjugate (Caribbean indigenous people) and do whatever we want,” on occasion relations were more cordial. Natives taught British colonists the reliability and synergy of their Three Sisters diet – corn, beans and squash. Colonists for a time recognized Native Americans’ distinct, self-governing societies, and worked out treaties indigenous people held as sacred agreements. In the end, about 400 treaties were signed and then broken.

“To Europeans,” Porter said, “land was a commodity.”

The blanket exercise hit on a number of events familiar to high school history students, including the Indian Removal Act and subsequent Trail of Tears; the 1887 Dawes Act, which sold 90 million acres of ancestral tribal lands at cut-rate prices to non-Indian settlers and which Theodore Roosevelt called “a mighty pulverizing engine to break up the tribal mass”; and the 1978 Indian Child Welfare Act, which governs the way Native American children can be removed from their families.

In fact, the accounts of indigenous people constitute important history, as Rio Ramirez, a Tohono O’odham educator in Tucson, wrote: “Knowing this country’s history is the first step we need to take in the long process of repairing our people and our land … Sometimes when people learn about the broken treaties, relocation and genocide, they feel guilty about what happened to Native Americans. Those feelings are OK as long as we move past them and try to help each other now as human beings.

“No one here today made these things happen. But we are the ones who are living now, and we need to understand that we are all in this together.”