Share God’s love with our neighbors-in-need around the world through One Great Hour of Sharing.
Make A Donation Click Here >
Home › Black Caucus president: ‘We cannot rest’ 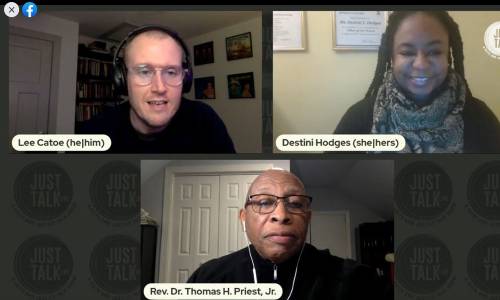 The NBPC’s mission, according to its website, is to “serve Jesus Christ, and enrich the black Presbyterian congregations and their communities, through our commitment to congregational enhancement, advocacy, social and racial justice; and challenging the Presbyterian Church (U.S.A.) when it fails to take seriously the needs of the poor, oppressed, and disenfranchised.”

Although the organization traces its roots, through its predecessors, to the 1800s, its mission continues to be relevant today, Priest explained.

“We invite all of those who believe in the mission to come with us and work to do this work,” he said. “Based on 400 years of white supremacy, with enslavement, with Jim Crow, with segregation, now voter suppression, we continue to be marginalized and this recent Black Lives Matter brings it to our attention that we do matter, and we need those voices.”

Priest was the featured guest on Tuesday’s “Just Talk Live,” a weekly web series from Unbound, the online Christian social justice journal of the Advisory Committee on Social Witness Policy, and the Young Adult Volunteers program of the Presbyterian Church (U.S.A.)

Later this year, the Caucus will hold its 46th biennial convention as a virtual event on June 24-26. The organizers take inspiration from Exodus 3:7, which says, “Then the Lord said, ‘I have observed the misery of my people who are in Egypt; I have heard their cry on account of their taskmasters. Indeed, I know their sufferings.’”

Noting several ways in which oppression has been part of the Black experience in the United States, Priest said, “The Black folks who’ve been the victims of all this cannot rest. We have not arrived yet.” 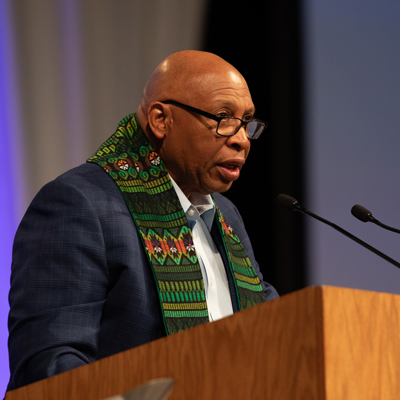 Along with talking about personal struggles that he’s experienced in PC(USA), Priest discussed working over the years to ensure that Blacks received “voice and vote” in the denomination and to advocate for empowering marginalized people, rather than just doing charity work.

“We can’t stay in the charitable,” he said. “We have to dismantle structural racism and systemic poverty.”

Other issues of importance include a dearth of Black Presbyterians in leadership positions, even in some urban presbyteries, Priest said.

Being able to fully participate in all aspects of the Church, including its governance, is crucial, he explained.

“Without being at the table and without voice and vote and representing a particular constituency, with the church being predominantly white European, the needs of others” can be overlooked, he said.

Another issue of concern is churches that choose to embrace the congregational vitality portion of the Matthew 25 invitation without also being committed to the other two foci: dismantling structural racism and eradicating systemic poverty, Priest said.

“They’re all three connected. That’s our theology,” he said. “We have seen too many white churches who are racists.”

Priest said he would like to see an intergenerational effort taking place to help bring about positive change.

“Dismantling racism starts within the church,” he said. “It starts at home where the heart is, where love is, and if we can’t manifest that in the church and make that as an example, how are we going to do it in society? We want government laws to tell us we’ve got to love each other? So as Presbyterians, we have the prime opportunity now to do the hard, tough work.”